Washington, DC, USA – In the past few days, bikers from across the United States have descended on Washington, DC, for the inauguration of “their president” Donald Trump.

“People are pouring into Washington in record numbers. Bikers for Trump are on their way. It will be a great Thursday, Friday and Saturday,” the 45th president of the United States said of his biggest supporters earlier this week.

Founder of the group, Chris Cox claims Bikers for Trump are “a force to be dealt with”, but insists they are “not vigilantes” like many people would believe.

“Bikers for Trump does not endorse violence nor do we endorse confrontations with paid protesters at Trump-for-President appearances,” he says.

Cox, who started the now 200,000-strong movement with just over 100 people in mid 2015, is expecting a peaceful transition of power.

The 48-year-old chainsaw wood carver from Virginia, who first came to the public’s attention in 2013 when he cut the lawn of the Lincoln Memorial during the government shutdown, said he and his fellow bikers, who are made up of blue-collar Americans and many veterans, would form a “wall of meat” should there be any problems at the inauguration.

“In the event that we are needed, we will certainly form a wall of meat. We’ll be shoulder-to-shoulder with our brothers. And we’ll be toe-to-toe with anyone who’s going to break through police barricades,” he said.

The group is the only pro-Trump group that was given a permit on inauguration day and will provide the half-time entertainment at John Marshall Park, along the inaugural parade route on Pennsylvania Avenue.

As bikes are not permitted in the city during the official ceremony, members of the group, of which about 5,000 are expected in Washington, will drive through the capital after the inauguration.

Al Jazeera met the bikers as they arrived in Washington from across the US to find out who they are and what they expect from their president.

Robert Doss is a retired firefighter from North Carolina

“I like Donald Trump. He’s going to be the best president we ever had.

I didn’t like him straight away, but once I listened to him, I knew he was for me.  Anyone but Hillary.

We’ll give him four years and if he’s no good, we’ll vote him out.

I came up from Carolina with a bunch of bikers. Its pretty amazing. The bikers have a great sense of community. It’s a great experience. I’ve made a few friends here and everyone is super cool.”

“We drove up on Monday and the next few days are going to be hectic.

We’re going to the Lincoln Memorial for an event, then we’re going ball hopping. We’re doing the half-time rally for the inauguration and then we’re doing a big biker event on Saturday. It’s a full-time job.

We came to Arlington Cemetery to pay our respects to our veterans, who are a big part of what we’re about. Once we leave here, god knows.

Around 60 of us drove in here together today and it was pretty special.

We have no interest in any kind of violence. This  is a community.  We want to have fun.”

DJ Ronn lives in Florida and supports Bikers for Trump

“I play any music that Donald Trump likes.

I was his DJ for seven years in the Taj Mahal hotel. I deejayed at Trump’s 50th birthday.

I’ve met him five or six times at social events and he always had beautiful women around him, but he never acted like he owned the place.

He treats his employees as equals and he employed more women than men, gays and mixed race people, so everything they say about him is boloney.

Jorma built the Trump mobile, which accompanied the bikers into Washington

“We are great supporters of bikers for Trump and drove into Arlington cemetery with them today. We will be parked up with them in Marshal Park during the inauguration.

I’m from Finland, but I’ve been living in Florida, in Palm Beach, for 42 years.

This car is made of two Mercedes station wagons.

I tried to sell them 13 years ago and no one wanted them. So I decided to make one big car out of them.  There are over 43 different parts from different cars in this car.

We brought this car up from Florida on a specially made trailer.

I’m a Yankee now, even though I have a strong accent. I work as a cabinet maker, I’m not a mechanic, but I created this car to be in the Guinness Book of Records.

I turned it into a Trump mobile around three months ago.  I got the signs and put them on the car and since then we’ve had so much attention.

No one in the world has a car like this. We will be part of the inauguration.”

“These bikes are here to support Donald Trump, but he’s a tangerine. They’re supporting a tangerine.

That’s what he stands for, so I don’t know why they bother.

He’s not going to make a difference in my life. I don’t care who comes to town to support him.

Look at these bikes and these cars, they think he can change stuff for them – well he can’t.

“I voted for Gary Johnson, so I’m in the middle I think.

I think there’s always people who are going to be a bit over the top, which you could say of these guys, but they’re not doing any harm so far.

Do I think we can only see this kind of thing in America?  Possibly. I brought my son up with me for the weekend just so he can see what the whole thing is about.

Her son, Lucius Hodges says he’s excited to be here.

“I’m 15 so this is my first big election and I’m really interested to see what happens. Its an incredibly time to be in Washington.”

Stephen Constable is a police officer from Texas

“I didn’t vote for anyone in this election. None of the candidates seemed up to par. They just didn’t seem like good candidates. I didn’t do the fear vote like so many others.

I think the bikers are pretty cool and I love this car.

The bikers are decent people. I haven’t heard about them beating anyone up, which is what people often think.

I’m entertained by them, so that’s cool too.”

“I didn’t drive the entire distance because it’s pretty far.

I’m just happy to be part of this movement. It spoke to me.

We want to make sure everyone is safe. No one needs to be harmed.

This is about a celebration. It’s about commaraderie and making America safe again.

I’m really looking forward to the next few days and years. There’s a lot of love here.” 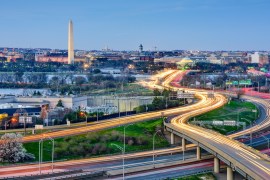 Voices from Washington on eve of inauguration 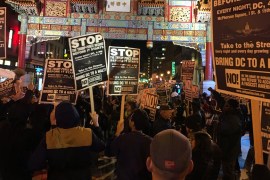 Donald Trump sworn in as US president amid protests

Anti-Trump protesters clash with police in Washington DC ahead of Trump inauguration.