Occupied East Jerusalem – For Palestinians living under occupation, achievements that benefit the community are often celebrated as a form of resistance.

A new one-classroom school, aptly named “Persistence”, for chronically ill Palestinian children being treated at a hospital in occupied East Jerusalem, is seen as just that: a triumph.

The school, the first of its kind in Palestine, has wedged a sliver of hope in an otherwise bleak atmosphere.

Here, children suffering from cancer and kidney disease, and who are usually forced to miss out on years of schoolwork, are able to continue their education for free while undergoing treatment.

Inside the small classroom, the walls are dotted with children’s posters that read “our future is ahead of us” and “thank you to the best school in Augusta Victoria”. Alongside hang hand-drawn renditions of the Palestinian flag, colourful houses and birds.

In one corner of the room, Shahd, a little girl with short, ash blonde hair and big brown eyes sits quietly at her desk, colouring in a worksheet of the Arabic letter she just learned. The five-year-old from Bethlehem has been diagnosed with leukaemia. Underneath her pink jumper, her small arm is connected to an intravenous drip.

In another corner, Amjad, from Gaza, rushes to the board with enthusiasm to solve a maths problem before his teacher is finished writing it out. The doctors have not yet determined which type of cancer the nine-year-old boy has.

For the close to five million Palestinians living in the occupied West Bank and Gaza Strip, the importance of the Augusta Victoria Hospital cannot be overstated.

It is the only hospital in the occupied Palestinian territories that Israel has permitted to provide radiation therapy for cancer patients. It is also the only hospital offering specialised paediatric kidney dialysis treatment.

This means that children from the West Bank and Gaza must spend a considerable amount of time away from their home towns, receiving treatment in Jerusalem.

Overall, 35 percent of the hospital’s patients hail from the Gaza Strip, while the remaining 65 percent come from the West Bank. For kidney dialysis patients, mainly from the West Bank, treatment can mean a visit to Jerusalem, which involves crossing arduous Israeli checkpoints, at least three times a week. For cancer patients, primarily from Gaza, treatment can mean spending months at a time at the hospital.

“Children undergoing kidney dialysis miss two to three days of school a week. Our cancer patients stay here from one month to 40 days, at least, and therefore miss a lot of material,” Mohamed Qabaja, head nurse of the paediatrics department, said.

“The school is compensating for that. We’re benefiting greatly because we’re taking the school to the patient’s bed. The child has started feeling that their time at the hospital isn’t just about getting treatment, injections and pain, but it has also become about learning,” Qabaja told Al Jazeera. “They feel as though they are at home.”

Israel has long banned the presence of any radioactive material, used in radiotherapy, in the occupied territories. It considers the material to be a “dual-use” product that can be utilised to make nuclear weapons, Physicians for Human Rights (PHR) in Israel confirmed to Al Jazeera. X-ray machines are also banned.

Palestinians under Israeli occupation have no immediate access to radiation therapy for cancer treatment. They must apply for hard-to-obtain permits from Israel to be transferred to East Jerusalem, which can take weeks, if not months, and can be fatal for the patient.

Israel also regularly denies and delays permit requests. PHR, which helps patients in Gaza obtain exit permits to receive medical treatment, says that there has been an increase in the number of permits delayed or denied over the years.

In 2015, 31 permit requests were denied while 17 were delayed. Last year, the number of permit requests denied rose to 42, while 26 others faced delays, according to PHR.

Israel also stipulates that any Palestinians from Gaza below the age of 17 must be accompanied by a first-degree relative such as a parent, grandparent, aunt or uncle, but parents under 55 are not eligible for a permit, meaning the child must spend months without their mother or father.

Like many children making the journey from Gaza, 12-year-old Malak who suffers from leukaemia, has been at the hospital for two months with her grandmother Widad el-Assal.

“She wants her mother to be with her very badly. The only thing that is keeping her patient is the knowledge that there’s no way for her mother to be here. But what can we do? That’s the life of a Palestinian,” said el-Assal, with tearful eyes.

“It’s been two months and we don’t know how much longer we have to be here,” she continued, adding that she is exhausted and unfit to take care of a child.

Walid Nammour, the chief executive officer of the Augusta Victoria Hospital, says Israel has made things unnecessarily difficult for the children. “When a child is suffering from cancer – that’s when they need the mother the most. But Israel only permits sending the grandmother or other relatives. It is so inhumane.”

With the opening of the school, the hospital vows to remedy the difficulties and nurture the overall wellbeing of the children. Samar Abu Sara, a teacher at the school, says the project has been “life-changing” for the patients.

To the children, explains Abu Sara, the classroom has become a safe space and a change of scenery, away from the pain of treatment. “The school has given them hope. Sometimes the children see us in the corridors and early ask us, ‘When is it my turn to study?'”

“Sometimes, they don’t like going back to their rooms because they know that that will mean check-ups or drawing blood. They feel safe here.”

For patients with kidney disease, the teacher must mentor the child as they undergo kidney dialysis for three hours.

Nawal Abu Nima says her daughter Lama’s overall temperament has improved since being enrolled at the school. “She finds herself at the same level as her classmates, or even ahead of them, which makes her very happy,” Abu Nima told Al Jazeera.

But the hospital, which is owned and operated by the Lutheran World Federation, may face closure due to unpaid debts from the Palestinian Authority, the semi-governmental body that administers the occupied West Bank.

The PA is unable to pay the fees, worth more than 120 million shekels ($31m), for the patients it referred to the Augusta Victoria Hospital, creating a cash flow crisis for the hospital.

“If the hospital closes, everything will go down with it – including the school,” said Nammour. “Even though we’ve managed to get a lot of financial support for the school, the hospital’s situation is bad.”

“We do not need more donations – we need the PA to pay what it owes.”

Still, despite the risks, Nammour says that the opening of the school represents a milestone for the hospital and an act of nonviolent “resistance to occupation.”

“My aim behind the school is to promote an understanding of human dignity for the Palestinian,” Nammour told Al Jazeera. “It is not about merely giving treatment to a child, who would then end up illiterate. It is a comprehensive approach that reflects our commitment to nurturing the Palestinian individual,” he continued.

“The school is a unique experience and we’re very proud – that we live under an occupation choking us day and night – but we’ve shown that we want to live in dignity and that we can do it.” 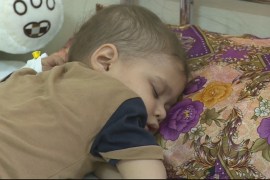 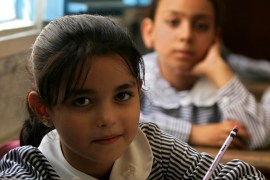