Jerusalem – The smell of scandal has swirled around the Israeli prime minister, Benjamin Netanyahu, for years. But only now is the smell starting to turn to a stench, say analysts.

Netanyahu and his wife, Sara, have long been known for cultivating close relations with Israel’s leading business families. Those ties, many Israelis assumed, explained why the famously parsimonious couple managed to indulge such expensive tastes.

Past investigations have looked into first-class transatlantic flights and stays at top hotels, but foundered on a lack of evidence that the Netanyahus had traded the high life for favours.

Until recently, most of the Israeli public had been amused, rather than outraged, by stories of astronomical bills at the prime minister’s residence for wine, ice-cream and hairstyling.

But the latest revelations have the potential to be far more damaging. This week one Israeli commentator suggested Netanyahu’s conduct risked being compared to the behaviour of a head of a “banana republic”.

Police are pursuing two parallel investigations, dubbed cases 1,000 and 2,000. The latter may turn out to be the most serious.

In the first case, according to leaks, Netanyahu accepted gifts from wealthy businessmen worth hundreds of thousands of dollars. The prime minister allegedly offered his benefactors assistance in return.

Arnon Milchan, an Israeli billionaire and Hollywood film producer, who has previously outed himself as a former Mossad agent, is said to have sent Netanyahu cigars and champagne. In exchange, reports say, Netanyahu successfully lobbied John Kerry, the United States secretary of state, on behalf of Milchan for a 10-year US visa.

In another case, the Australian billionaire James Packer is believed to have showered Netanyahu’s family with gifts, as he tried to gain permanent residency, and tax status, in Israel.

Netanyahu’s lawyers do not deny that he received the gifts, but say they were not intended as inducements.

The second case relates to audio recordings of lengthy meetings between Netanyahu and Arnon Mozes, the owner of the Yedioth Ahronoth media group, which includes Israel’s largest paid-for newspaper.

According to details that emerged this week, Mozes reportedly offered favourable coverage to help Netanyahu stay in power and even suggested that his company would hire journalists of the prime minister’s choosing.

In return, Mozes is said to have asked Netanyahu to promote legislation to end the free distribution of a popular rival daily, Israel Hayom, forcing it to become a paid-for title. Netanyahu is alleged to have responded positively to the proposal.

In one of the recordings, as elections neared in early 2015, Netanyahu can reportedly be heard warning that he will “deal” with Mozes if Yedioth Aharonoth campaigns against him.

On Wednesday, a former deputy chief of Israel’s supreme court, Eliyahu Matza, told Army Radio that on the basis of these reports it would be “clear to any novice jurist” this was a case of bribery.

Netanyahu is expected to be questioned by police for a third time on the allegations in the next few days. His lawyers have indicated that they will argue that Mozes was the one extorting Netanyahu, which is why the prime minister’s officials recorded the conversation.

But Matza discounted such a defence. “An office holder threatened with extortion goes to the police,” he said. “If he’s prime minister, he can turn to the attorney general. If he’d done so, he would have remained above any suspicion, but he didn’t.”

Oren Persico, a reporter with Seventh Eye, an Israeli media watchdog website, characterised Mozes’ offer, from what is known so far, as worse than bribery. “It looks more like a mob-style operation to offer Netanyahu protection from Yedioth Ahronoth, if the prime minister helped damage a media rival,” he told Al Jazeera.

The recordings were found on a phone during a search of the belongings of Ari Harow, Netanyahu’s former chief of staff, during a separate fraud investigation.

On Saturday, Channel 2 TV produced transcripts of parts of the conversation. Netanyahu can reportedly be heard telling Mozes: “We are talking about moderation, about a reasonable media, we need to lower the hostility towards me.”

Mozes responds about forthcoming elections: “We need to make sure you will be prime minister.”

On Sunday, as more jurists publicly condemned the tapes, Netanyahu told party officials: “There’s a campaign of biased leaks, intended to mislead the public and distort the true picture, as if there were offenses here that didn’t happen.”

The attorney general, Avichai Mendelblit, reportedly waited some six months after the recordings came to light to authorise an investigation.

The foot-dragging has fuelled concerns that Mendelblit, who was appointed by Netanyahu, is too close to him to act impartially.

On Wednesday justice ministry officials and police investigators said they had opposed the delay in questioning Netanyahu and believed it had harmed the investigation. Meir Gilboa, a former head of the police national fraud squad, told the Haaretz newspaper: “The long delay seems blatantly implausible.”

Yousef Jabareen, a member of the Israeli parliament belonging to the Palestinian Joint List party, told Al Jazeera: “If Israel were a properly run country, the evidence against Netanyahu would already be sufficient to force him to resign. It is difficult, however, to have confidence in either the attorney general or the prosecutors. The legal authorities have been under relentless attack from Netanyahu’s government for years and their independence has been severely undermined.”

From the outset of the allegations, Netanyahu has denied any wrongdoing, posting on Facebook: “There will be nothing because there is nothing.”

The background to the case is a decade-long war for readers between the two biggest-circulation newspapers in Israel. Persico said that, until the late 2000s, the Yedioth Ahronoth group had enjoyed near-monopoly status in Israel’s print media. Netanyahu had grown increasingly concerned about the bad coverage he was receiving from the paper and the support it was offering his political rivals.

“After he lost the election to Ehud Barak [in the late 1990s, after his first term as prime minister], Netanyahu was rumoured to be telling friends he needed his own paper to limit Yedioth Ahronoth’s influence,” said Persico.

In 2007, as Netanyahu prepared for a return to power, his political patron Sheldon Adelson, a US casino billionaire, launched the Israel Hayom newspaper. Freely distributed, it soon had a circulation of up to 400,000 a day, making it more widely read than Yedioth Ahronoth.

Persico agreed. “The Israel Hayom paper was effectively a political gift from Adelson, a propaganda tool to serve the interests of Netanyahu and his family.”

Adelson’s paper was never profitable. An investigation by Haaretz this week showed that he sunk some $190m into it in its first seven years to keep it afloat. The losses continued to grow.

But Yedioth Ahronoth possibly paid a higher price, as its ad revenues plummeted with its falling circulation.

“Adelson’s pockets are very deep,” said Persico. “He and Netanyahu used Israel Hayom to bring Yedioth Ahronoth to its knees financially.” It was this prolonged financial crisis at the paper, added Persico, which drove Mozes into making Netanyahu the offer currently under investigation.

A key meeting between the Yedioth owner and Netanyahu occurred in late 2014, around the time the Israeli parliament was considering legislation specifically to curb Hayom’s activities and thereby strengthen Yedioth.  Netanyahu publicly opposed the bill, while rival parties in his government coalition supported it, giving it a good chance of success. It was never brought to a final vote, because Netanyahu called elections in early 2015, before the legislation could pass.

The election effectively killed the negotiations between him and Mozes.

Isaac Herzog, the leader of the opposition Zionist Union party, said this week that Netanyahu’s use of Israel Hayom as a bargaining chip in the talks confirmed claims that “the editorial offices of Israel Hayom were and are run by Benjamin Netanyahu”.

The occupation has served Netanyahu and his predecessors well at times like this. They can always escalate things with the Palestinians to prevent public pressure building for dealing with corruption.

But Jafar Farah, head of Mossawa, an advocacy group for Israel’s large Palestinian minority, said the talks between Netanyahu and Mozes were only “the tip of the iceberg”.

“This is more than just about Netanyahu,” he told Al Jazeera. “The recordings throw a glimmer of light on the systemic corruption in Israel. The main political players are connected to networks in the media and big business, and behind the scenes they fight each other for control.”

Since his 2015 election victory, Netanyahu has reserved for himself the communications ministry and required of his coalition partners that they agree to any media initiatives he proposes.

Herzog demanded this week that Netanyahu immediately relinquish the communications ministry or he would petition the courts. The question now is whether these new cases will bring down Netanyahu.

Jabareen noted that as a legislator he was not allowed to receive a gift of more than $70 without declaring it. “That alone should give us a sense of the magnitude of what Netanyahu has done,” he said.

Netanyahu’s closest allies, however, have claimed that he is the victim of persecution. David Bitan, chair of his Likud party, told reporters: “In other countries, people do that [topple governments] through military coups. But we took it a step further. We do this through police coups.”

The analysts who spoke to Al Jazeera believed Netanyahu might be able to weather the storm, given an apparent lack of interest so far from the public, his close ties to the attorney general, and little appetite among his government coalition partners for early elections.

Farah said Netanyahu would also distract public attention from the allegations by focusing on “security” matters. “The occupation has served Netanyahu and his predecessors well at times like this,” he said. “They can always escalate things with the Palestinians to prevent public pressure building for dealing with corruption.”

If Netanyahu is indicted, he would almost certainly have to step down. That is what happened to his predecessor, Ehud Olmert, when he was charged – and later convicted – of receiving cash in envelopes from a businessman.

Olmert succeeded Ariel Sharon, who was himself the subject of a series of police investigations that were dropped when he fell into a coma in 2006 and later died. 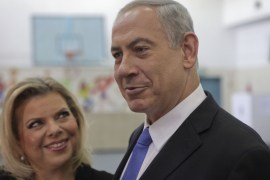 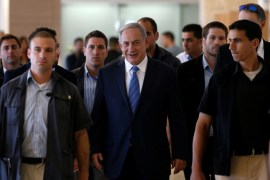 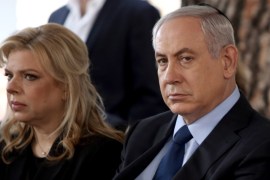