Chahari, South Sudan – The dull thud of a coconut being thrown against a flat stone summons the children around the low straw-thatched mud tukul, a traditional round house in eastern Africa. Nadia* pulls the orange pulp out of the fruit where the rind has cracked, breaking it up among many tiny hands.

“One person was shot dead in front of me, so I had to jump over his body,” she says, describing her escape from the town of Ikotos, in the Imatong state of South Sudan.

Tens of thousands of people have been killed and more than 3.5 million have been displaced since South Sudan descended into war shortly after it seceded from Sudan in 2011. Starting in December 2013, President Salva Kiir‘s troops have clashed with those of rebel leader and former Vice President Riek Machar. A peace accord signed in August 2015 fell apart after less than three months.

Women and children have paid a particularly heavy price in the fighting with over two million children displaced and reports of ethnic cleansing and rape perpetrated by all sides in the conflict. And while the men fight, many women are left behind to carry the day-to-day burden of caring for their families.

This was not the first time Nadia had seen someone shot dead, but this time was different because she was on her own with her children.

Nadia is a single mother. Her youngest is six years old and both he and his two older brothers depend solely on her. Of their father, she says “he is not here,” without further explanation.

In July 2016, when the rebel forces and the government army clashed in Ikotos, Nadia was working as a cleaner at a government office. “When a group of youths attacked the barracks, we shut ourselves into our house,” she says. But an hour later, with the fighting becoming more intense, she left everything behind as she fled with her children.

They travelled for three days, hiding in the bush and surviving on grass and wild fruit, as they made their way to the village of Chahari in Eastern Equatoria state where her relatives lived.

The state was once considered a safe and fertile area of South Sudan. But, after the peace agreement failed, the fighting reached some cities in Eastern Equatoria as well. Two million people are internally displaced in South Sudan. Nadia is hoping to find a relatively peaceful life in this remote, rural area, far from the fighting engulfing the cities and larger towns.

Still, providing her children with enough food to eat is a struggle. A famine fuelled by drought and fighting has ravaged the region for four years.

Women digging in the fields, fetching water or picking wild fruit from trees are a familiar sight in these villages, while the men are away grazing livestock or fighting on the front line.

Most men here take more than one wife.

Maria Gaudenzi, area team leader for the AVSI Foundation, explains that often the men “are unable to take care of these nuclei, so all the responsibilities fall completely on their wives”. The Italian non-governmental organisation (NGO) is the only active international NGO in this area. It has been running schooling, healthcare and food security programmes in partnership with the World Food Programme and UNICEF since 2005.

With husbands absent, women live by their wits, farming, caregiving, and working on side businesses to generate more income. Away from the frontline of the conflict, they are the ones upholding the country.

Betty Justine Olia, a 38-year-old local health worker with AVSI, has just filled a syringe with the measles vaccine. A dozen women have gathered from surrounding communities to be immunised against polio, diphtheria, pertussis, hepatitis and tetanus, with their children clinging to their necks.

“The role of a man here is only to look after cattle and go for cattle raiding,” Olia says. “Most of agriculture and caregiving activities are on women.” Livestock is very important for local ethnic groups, as it works as a sort of currency.

Rosina Imolong, Olia’s 25-year-old colleague, explains the importance of updating health cards to the rest of the mothers.

According to its 2016/2017 Approved National Budget plan, South Sudan has invested only three percent of its overall expenditure on health, while security-related expenses account for 44 percent. “The health system is weak, meaning that the government is not able to provide even the most basic services,” Gaudenzi says, “so there is this huge demand of support from NGOs.”

In half an hour the women will pack the equipment, drugs and mats onto their bicycles and head for the next village. “We are carrying out this service to the people who are not reachable by normal facilities,” Olia says. Pushing hard on the pedals, the women travel to four different villages each week, visiting pregnant women and looking for malnourished children. Their team represents the only healthcare that most locals will see in their lifetime.

Imolong and Olia have similar stories to the women they help through the programme.

Olia struggles to make ends meet, as she cares for her six children by herself. “My partner left me because I spent too much time taking care of my disabled father,” she explains. At night, after attending visits and workshops, she sells home-brewed alcohol to make some extra money.

Imolong thought she had managed to avoid a similar situation when, in 2010, she married a school teacher. But her experience has not met her expectations.

“He doesn’t help me at all as he keeps the money he is earning from me and asks for mine,” Imolong says. She was two weeks pregnant when they had their first quarrel. “He said that my head was not good and it was better for him to marry an illiterate woman,” Imolong recalls.

Since independence, the government has advanced several steps in gender rights: the Transitional Constitution and Bill of Rights guarantee equality among men and women, setting out a 25 percent quota for women in legislative and executive bodies. Nevertheless, with the ongoing war, little has changed on the ground in the everyday lives of women, in healthcare, safety, employment and education.

Unlike many women in South Sudan, Olia and Imolong can rely on the steady income they receive through their jobs as health workers. In an area where subsistence agriculture is the main activity, international NGOs are seen as the most reliable and generous employers.

The education they received growing up in refugee camps in Uganda where they both attended formal schools, has played a significant role during the job-hiring process.

Yet education remains a challenge for young people in South Sudan, and many girls face additional difficulties due to the gender roles assigned to them.

According to UNICEF, 76 percent of South Sudanese girls are out of school. “From an early age, families send their male children to school while keeping their daughters at home to help with domestic work and look after their younger siblings,” says Gaudenzi.

Even if they step into the classroom, child marriages and early pregnancy often cut their education short. “So girls may start their education, but they give up later,” says Gaudenzi. According to 2016 National Education Statistics, in every grade female students are more likely to drop out than male students.

According to UNICEF report, The state of the world’s children 2016, 52 percent of girls in South Sudan are married by their 18th birthday, and nine percent by their 15th. “Many girls at the end of the primary school get married, so not many of them go up to secondary [school],” says Sister Paskwina, a 62-year-old nun who teaches at the local school in the town of Isohe.

Child marriages in the region have increased as a result of the ongoing crisis, according to a survey conducted by CARE International, with families resorting to them in the hope of receiving a dowry payment or having one less mouth to feed.

“I went to school until I was three months pregnant, but when the school discovered it, I was told to stay home,” says 18-year-old Paska, her six-month-old son Bryan sticking his head out of her arms. She was halfway through her first year of secondary school when she became pregnant. Local teachers discourage pregnant teenagers from attending classes, even after they give birth because this “could be seen as promoting this behaviour,” explains Paskwina.

“My boyfriend had no cows to pay to my family, so he ran to the capital,” Paska says. She nervously taps her left foot on the floor when talking about her child’s father. According to customary traditions, a man must pay a cattle price to the father of his bride as a dowry. But Paska’s partner was a student so left to find a job in Juba, the capital. She believes that he will come back for her when he has earned enough money.

Paska understood that without schooling she would have no chance of finding a decent job. She was determined to finish school. During her pregnancy, she asked her classmates for notes, so she could study at home. Her family supported her, so they contacted AVSI foundation, which helped persuade the school to allow Paska back into the classroom.

She wakes up at six every morning, breastfeeds Bryan and attends classes. During the midday break, while other students play in the schoolyard, she rushes home to feed him again.

A dream drives her. “I love science, and I want to be the first female doctor here,” she says. If she fulfils her hopes, she might become the first South Sudanese working in a hospital in this region, as most doctors currently come from Uganda.

Paska’s dream is to be part of a new generation of South Sudanese women, capable of moving their country forward, not just living idly by as the men herd cattle and fight wars. 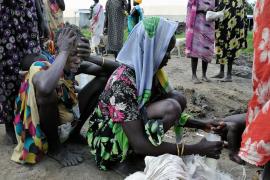 As many as 100,000 people are estimated to have fled their homes as fighting surges in Jonglei. 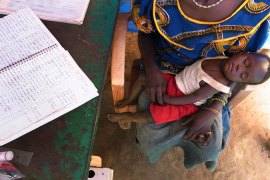 With the creation a new state, many women hope independence will lead to improvements in maternal health.