Swedish anti-racist politicians, watchdog groups and Jewish organisations have expressed anger as self-professed National Socialists prepare for a rally slated to take place on the Jewish holiday of Yom Kippur in the country’s second-largest city.

The Nordic Resistance Movement (NRM), which anti-racist organisations describe as neo-Nazis, is holding a demonstration on September 30 in Gothenburg, which is located on Sweden’s western coast.

They have dubbed the event “Revolt against the traitors”.

The event will be a rally against “the politicians in the Swedish parliament as well as the European Parliament” who “have flung our nation’s borders wide open to an unprecedented invasion”, the NRM said in a statement, referring to the country’s acceptance of refugees and migrants fleeing war and economic devastation in recent years.

The statement added, “Today’s politicians and journalists are nothing short of robbers and traitors!”

At the time of publication, the NRM had not replied to Al Jazeera’s repeated requests for additional comment.

Linda Snecker, a spokesperson for Sweden’s Left Party, described the NRM as “a threat against our democracy and open society”.

Police have changed the NRM’s planned route, prompting the group to hold a flash demonstration in Gothenburg on September 17, with some 60 demonstrators marching through the city centre.

In a video posted on the NRM’s YouTube channel, the demonstrators waved flags and chanted against immigration. When angry passers-by confronted them, an NRM protester threw a woman to the pavement.

Although the NRM has been active for two decades, Snecker said the group is attempting to capitalise on the rise of the far-right Sweden Democrats Party, which has 49 seats in the national legislature, and the wave of far-right populism that has hit parts of Europe and the US in recent years.

“Their agenda is violence, to scare people, to show you can’t protest against them and that they have a violent capacity,” she said. “That’s really scary.”

The demonstration was set to pass near a synagogue in the city centre, which has prompted faith leaders to express concern for the city’s Jewish community. However, a court ruled on Monday that the route would have to be changed.

Aron Verstandig, chairman of The Official Council of Swedish Jewish Communities, and Allan Stutzinky, chairman of the Jewish Community in Gothenburg, decried the police’s decision to grant the NRM a permit in an opinion article published by the Svenska Dagbladet newspaper earlier this month.

“Aside from out of fear for our own security, it evokes uncomfortable associations for us Jews. During the Holocaust, it wasn’t unusual for the German Nazis to conduct their horrendous atrocities on the most important days of the Jewish calendar,” they wrote.

Henrik Dahlberg, a media spokesperson for the City of Gothenburg, said it does not have the legal authority to prevent the march from taking place.

“Demonstrations such as this one have a very strong protection in the Swedish constitution,” he told Al Jazeera by email. “Therefore, the march in and of itself cannot be stopped.”

In 2016, the anti-racist magazine Expo documented 3,064 instances of neo-Nazi activities in Sweden. The bulk of the activities involved spreading propaganda, such as distributing flyers and posting stickers.

In a December 2016 study that examined the profiles of 159 NRM members, Expo found that more than a quarter of them had previously been charged with violent crimes, while 56 percent had been convicted of a crime.

Explaining that the group had grown in recent years, Expo added that a third of active NRM members in 2015 had not previously had any documented connections to neo-Nazi organisations.

Last week, Sweden’s Prime Minister Stefan Lofven called for action to combat the rise in far-right activity in the country. “When we now see an escalation of these extremist forces, and we are moving towards a normalization of racist parties too, then we must do something,” he said.

Wiklander explains that the NRM draws on the ideological traditions of the German National Socialists, American white supremacist groups that were prevalent in the 1980s and other European fascist organisations that were active in the lead-up to and during World War II.

“At this point, it’s the only national socialist organisation, but they exist within a larger white nationalist and far-right alignment,” he said.

“For a long time, they were a fringe movement because they were very hostile to [far-right] competition and mostly stuck to their own. In the last 10 years, they’ve [benefited from] different [white supremacist] groups coming together.”

The NRM was founded as the Swedish Resistance Movement in 1997 by Klas Lund, who has previously spent time in prison for bank robbery and manslaughter for the 1986 killing of an anti-racist organiser who intervened to stop the harassment of migrants.

READ MORE: Meet the refugee who fought neo-Nazis in Sweden

More recently, the NRM has established a branch in neighbouring Finland, where its members have attacked anti-racist demonstrations and LGBTQ pride events.

The group advocates Sweden’s exit from the European Union, the mass deportation of all refugees and migrants and what it describes as “Nordic self-sufficiency” based on National Socialist ideology, among other far-right policies.

In July 2017, a court in Gothenburg sentenced three men with ties to the NRM over bomb attacks that targeted refugee shelters and left one person severely injured. The men were sentenced to eight years and six months, five years and a year and a half, respectively.

Following the election of right-wing President Donald Trump in the US last November, the NRM staged its largest demonstration to date. More than 500 NRM supporters went onto the streets of Stockholm, the country’s capital and largest city.

In February 2016, the NRM praised a mob of more than 100 black-clad Swedes who attacked refugees and migrants in central Stockholm.

Explaining that the NRM has been “reaching out to people who are leaning toward authoritarian, far right politics”, Expo’s Wiklander said the group has “increasingly been viewed as the muscle on the far right”.

He concluded: “They are attracting more people to their demonstrations… They’ve become more visible, and they are carrying out more activities.”

Editor’s note: The article has been updated to reflect the court’s decision to change the route of the NRM’s march on September 30. 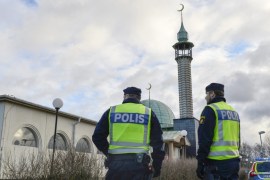 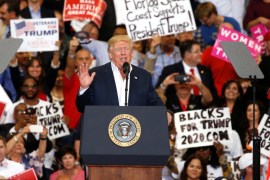 Confusion and mockery abound as US president refers to Sweden attack that never happened to justify Muslim ban. 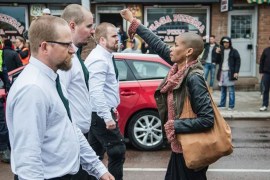 Q&A: ‘Racism is on the rise in Sweden and it is scary’

Activist Maria-Teresa “Tess” Asplund was photographed with her fist raised to defy 300 neo-Nazi marchers in Sweden.