Sulaymaniyah, northern Iraq – Walk into a cafe in the capital of Iraq’s semi-autonomous Kurdish region, Erbil, strike up a conversation about the referendum, and you will find customer after customer waxing lyrical about voting “yes” to the region’s bid for independence.

Finding a “no” voter, or someone who will boycott the vote altogether is near impossible in the Kurdish region’s capital of Erbil, controlled by President Masoud Barzani‘s Kurdistan Democratic Party (KDP).

In the city, voters largely see the referendum as history in the making and an opportunity to rid the region of a fraught and deadly shared history with Iraq.

Much of the Iraqi-Kurdish minority’s animosity stems back to an “Arabisation” campaign led by late Iraqi President Saddam Hussein’s Baathist government, which aimed to shift the demographics in favour of the country’s Sunni population.

As a result, the decades-long campaign displaced hundreds of thousands of minorities, including Kurds, Turkmen, Christians and Yazidis.

International rights groups including US-based Human Rights Watch classified the Anfal campaign – an operation launched in the late 1980s against the Kurds in Iraq’s north – as a “genocide” for the use of chemical weapons. Some 4,000 villages in the Kurdish region were destroyed, and up to 100,000 civilians were killed.

“September 25 is a historic day for all the people of the ‘Kurdistan’ region,” Baxtiyar Goran, a 25-year-old Erbil-based journalist, told Al Jazeera.

“An independent Kurdistan would put an end to all the catastrophes, opening the door for the people of Kurdistan to build up their own country and shine as a beacon of democracy and stability in a volatile Middle East,” Goran, who plans to vote in favour of independence, added.

“The result of living in Iraq has only been genocide, chemical bombardment, displacement, and the destruction of our homes, villages and towns.”

But not all Kurds are in agreement with the likes of Goran. In the region’s second-largest city of Sulaymaniyah, opinions on the referendum vary.

According to Abdul, the conditions for a referendum must include political and economic stability. He says that the Kurdish Regional Government (KRG), which is embroiled in such crises that have crippled the region, must resolve these issues before a fair referendum takes place.

“We still don’t have a united administration,” Abdul continued, referencing the KDP-controlled Erbil and Duhok governorates and the Patriotic Union of Kurdistan (PUK) controlled Sulaymaniyah and Halabja.

The long-time rivalry between the KDP and PUK, which saw both Kurdish parties face-off against each other on opposite sides of the Iraqi-Kurdish civil war, has seen some scepticism from voters in PUK-controlled Sulaymaniyah over the intentions of the largely KDP-led referendum process. The three-year civil war, which began in 1994, resulted in both parties controlling different areas of the Iraqi Kurdish region.

Like Abdul, a number of voters in PUK controlled areas see the referendum process as undemocratic, carried out without the backing of the KRG Parliament. For the first time in two years, the legislative body convened on September 15, officially supporting the referendum and its scheduled date.

The institution has been in recess since a parliament speaker, who is a member of the Sulaymaniyah-based political party Movement for Change, was refused entry to the region’s capital by KDP-affiliated security forces in 2015.

Instead, both parties have been lobbying for the reactivation of parliament, and for political factions to resolve internal disputes, before such a vote takes place.

A joint statement by both groups released this week reaffirmed the belief that while self-determination was a natural right of the Kurdish people, holding the referendum under the current political conditions and without solving internal crises in the KRG is a “dangerous step” to take.

The debate that has sprung up in Kurdish society has not merely revolved around which way to vote, or around whether the vote should take place altogether.

The debate has also included a discussion about the inclusion of the disputed territories – such as the oil-rich province of Kirkuk and parts of the Nineveh and Diyala provinces. These are controlled by the Kurdish military and lie outside of KRG’s defined borders, but are regarded by Kurdish leaders as integral parts of any independent Kurdish state.

The inclusion of Kirkuk, in particular, has incensed Turkmen in the ethnically mixed region, who dubbed the decision of partaking in the upcoming vote “unconstitutional“.

Kirkuk, regarded as part of the state of Iraq by Baghdad, and part of the autonomous Kurdish region by the KRG, officially announced its participation in the referendum last month.

Similarly, Iraqi Prime Minister Haider al-Abadi and other government officials have repeatedly said that the referendum would violate the Iraqi constitution.

“We will not allow the partition of Iraq,” Abadi said.

The potential of an independent “Kurdistan” is also perceived as a threat by neighbouring Turkey and Iran, who fear that an independent state will influence their own Kurdish populations.

Meanwhile, the United States and the European Union have both advocated for the postponement of the vote, fearing the referendum could distract from the fight against the Islamic State of Iraq and the Levant (ISIL, also known as ISIS) by rising tensions between the Kurds, Turkmen, and Arabs.

International Crisis Group’s Iraq senior analyst, Maria Fantappie, told Al Jazeera that the referendum was already creating uncertainty in Iraq and that the power struggle afterwards would determine what effect the vote would ultimately have on the region.

“It’s [the referendum] impact on Iraq will depend less on its turnout and results, and more on how Kurds and Iraqis will react to the vote and manipulate its results to achieve their political aims in the power struggle unfolding after the defeat of [ISIL],” Fantappe said.

Those who will vote in favour of independence say they are well aware of the problems that exist within the region and around the referendum. However, with the Kurdish region on the international radar following the Peshmerga‘s contribution in the fight against ISIL, “Yes” voters say the time is right for a separation from Iraq.

While an overwhelming majority of social media users utilised platforms to voice their support for independence, a countermovement led by a group of activists, entrepreneurs, and politicians in the region advocated for a postponement of the referendum under the slogan of “No for Now”.

Still, the countermovement did not succeed in convincing voters like Najwa Abbasi to vote in opposition to independence.

“If we go back 100 years, Iraq has tried to debilitate civil Kurdish [society],” Abbasi said from her hometown of Sulaymaniyah.

“I know they [voters who are voting in opposition to independence] are hesitant and I want to tell them – look back at what they did to us, we are the owners of our land. Every Kurdish house has lost a member in war,” she added.

Monday’s referendum is neither binding nor the first. In 2005, a similar referendum held by Kurdish parties revealed a desire for independence.

However, Kurds have become far more divided since the 2005 ballot, with the region engulfed in a financial crisis that has been blamed by some Kurds on the war against, as well as political mismanagement and corruption.

Barzani’s continued presidency term, which had expired in 2013, has also driven a wedge between civilians in the KDP and PUK-controlled areas, with some voters saying that they see the referendum process as a hijacking of the Kurdish independence movement – which almost all Kurds support – by Barzani.

Rebaz Jaza Abdul Qadir, a university student from Sulaymaniyah, said he would boycott the vote altogether because of his views on Barzani.

“Holding the referendum is an agenda which has been put forward by Barzani’s family in an effort to postpone presidential elections and extend Barzani’s illegal presidential term,” the 24-year-old told Al Jazeera.

Qadir said he believed the referendum was also being used to obscure failures in governing the region committed by both the KDP-led Barzani family, and the PUK-led Talabani family.

“New political unrest will occur among the parties after the referendum, I hope it won’t reach civil war,” Qadir added.

While it is expected that the vote in favour of independence would ultimately win, Kurds on both sides agree that for the referendum to be a success – regardless of what side tops the ballot – internal disputes have to be resolved and potential instability staved off in its aftermath.

The Kurdish region, made up of three governorates – Erbil, Dohuk and Sulaymaniyah – has enjoyed broad autonomy since the 1991 Gulf War, and has since then expanded their territory by 40 percent. It has been seeking independence since the conclusion of the first world war. 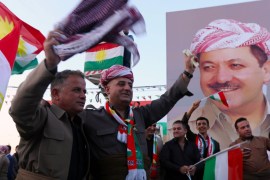