In order to protect their privacy, children featured in this article do not appear in the photo material

Kutupalong, Cox’s Bazar – Rashid is only 10 years old, but his little shoulders carry a heavy responsibility – he has to take care of his six-year-old sister Rashida.

They are among about 1,400 Rohingya children who have arrived in Bangladesh near the Myanmar border without their parents, who were either killed or are missing in the wake of a brutal military crackdown in western Rakhine State.

Rashid is mourning the loss of his parents – father Zahid Hossain and mother Ramija Khatun, who, he says, were killed by the Myanmar military.

The Rohingya accuse the Myanmar army, with a history of committing atrocities against the ethnic community, of using an attack by a Rohingya armed group as a pretext to force the community out of Myanmar.

The Child Friendly Space (CFS) at Kutupalong refugee camp in Cox’s Bazar was abuzz with activity. More than 60 children were busy colouring, drawing and playing with toys.

Rashid was quiet and his feeble voice was often drowned out by the sound of tambourines enthusiastically played by the children.

He lived with his parents and six siblings in Shikderpara village in Maungdaw until August 25, when the army attacked his home as part of its campaign that included mass killings and burning swaths of Rohingya villages – an act seen by the United Nations as “textbook ethnic cleansing”.

“It was Friday. I grabbed my sister’s hand and ran towards the nearby hill. After the army departed, I came back to find my parents dead,” he said.

He had little time to mourn in his village. He found his neighbours near the hill and tagged along with them for the rest of the journey.

“I walked for three nights to reach the Bangladesh border. I crossed the Naf river to enter Bangladesh a day before Eid on September 1,” he said.

Rashid has no clue about the whereabouts of his other siblings. “I heard that all my brothers and sister were killed.”

The distraught boy stays with his neighbours, who, he says, have been kind to him, as well as his sister.

The CFS centres, supported by UNICEF in collaboration with local aid agencies, have become a sanctuary for children in trauma, with many of them too young to even understand the enormity of the tragedy.

“When he [Rashid] came on the first day, every few minutes he would come to me and say his parents are dead,” said Faria Selim, communication specialist at UNICEF Bangladesh.

“He has eased up a bit in the past few days after he started to come here,” she said.

Rashid says he had dropped out from his school in Myanmar, but he likes the CFS, which opens six days a week.

Selim informs that there are 42 CFSs in Ukhia and Teknaf, places hosting almost all of the 429,000 Rohingya refugees, who have arrived since August 25.

“Here there is no chance of being attacked. No one is keeping an eye on us. Everybody is free to do anything,” Rashid told Al Jazeera.

He wants to be a teacher so that in the future he could teach other Rohingya children.

‘I saw the military firing at my parents’

Dilara Begum, 11, and Ajija Begum, 9, too, have lost their parents. The elder sister is still in shock and barely speaks.

“It was just before lunchtime. My mother Hamida Begum asked me to play at the premises of our house so that my father [Mahumud Hussain] could get ready for work,” says Ajija.

While Ajija was playing with her sisters Dilara and Mushtakim she heard the sound of gunfire. Scared, she ran into a bush near their house in Bargojibil village in Maungdaw.

“Hiding behind the bush, I saw the military firing at my parents. Later, they slit my father’s throat and stabbed my mother in the stomach with a big knife,” Ajija said wiping her tears, while Dilara looked lost.

Ajija did not return and in the chaos, she lost her sisters. “At the hill area, my neighbours offered me a lift after hearing that my parents were killed,” she said.

She was united with her sisters at the camp in Kutupalong. Mushtakim, who is mentally challenged, is now recovering from a bullet injury. Eight of her siblings were also killed in the attack.

Back in Myanmar, Ajija often avoided going to school as the army regularly visited there. Dilara never went to school.

“I am happy to be in Bangladesh as there is no fear of being killed. I have made lots of friends here. I am having a better time,” Ajija said.

She wants to study to “become something and to know herself”.

Dilara, who barely spoke during the entire conversation, said that Mushtakim was staying at a relative’s shanty and recovering from an injury.

‘Memory of my parents haunts us’

Nur Hossain, 12, and his younger sister Jahura Begum, seven are the only survivors of a family of nine.

“It was around 10am on August 25 when our village [Rodiongsong in northern Maungdaw] was attacked. Grabbing my younger sister Jahura’s hand, I left home running through fields with fellow villagers,” Nur said.

“My parents – Sultan Ahmed and Hajera Khatun – were killed in the attack. Village elders carried us to Bangladesh.”

He found four of his village friends at one of the schools run especially for Rohingya at registered camps.

He was a student in Myanmar, but couldn’t recall the name of that school.

Nur loved playing football, one of the most popular sports in Myanmar, but due to fear of the army, Nur had quit playing the game.

“Here, we don’t have the fear of the army. But still, the memory of my parents haunts us. I remember them very well. I was so loved by them and now they are nowhere,” he said.

Anjuman, along with her younger brother and sisters, was playing with her brother-in-law Bahadur Hossain at their home in Saheb Bazar village in Buchidong.

“Suddenly, the army stormed into our home and started firing indiscriminately,” the 11-year-old, who does not remember the exact date of the attack, told Al Jazeera.

Bahadur ran towards the door, but could not escape the bullets, Anjuman says. He died along with 10 other family members, including her parents – Gura Miah and Shamsunnahar.

She came to Bangladesh with her elder brother Anwar, 35.

Shapolu Barua, outreach officer at the Kutupalong CFS, says “most of the children here have been traumatised.”

“For example, Rashid went through a very long counselling session. He was shivering on the first day and kept on saying ‘They killed my parents,'” said Shapolu, who works for CODEC, an NGO that is implementing the UNICEF project.

Children, she says, have been categorised into two main groups – one between four and 11 years and another between 12 to 18 years old.

“The junior section is the most vulnerable,” she said, adding that staff at the centre try to make a bond with the children and “counsel them to shed the fear of the Myanmar military”.

“For 12-18 age group, we have adolescent centres, where they learn lessons on reproductive health along with other educational programmes.”

The CFS at Kutupalong is an enclosed space made of bamboo and hay sticks and currently holds 562 children – 70 percent of them arrived after August 25.

“We focus on psychosocial and recreational support , life skills based on education, protection and safety issues and health and hygiene,” Selim from UNICEF said.

“We also provide recreational items: learning toys, pens and pencils, colour pencils and also sports material,” she said, adding that many of the children were “totally numb and in trauma”.

“Some of them do not really want to talk. We do not force them and instead give them the space to settle down and open up gradually, seeing all these children having fun,” she told Al Jazeera. 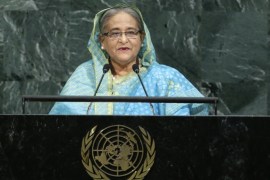 In speech to UN, Sheikh Hasina presses Myanmar to allow the return of ‘hungry, distressed and hopeless’ refugees. 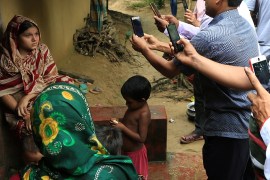 They look at us with hope, but we can only document their despair

As a photojournalist capturing the suffering of the Rohingya, I wonder whether our pictures are doing anything to help them at all.