By Charlene Anne and Fuad Rajeh

The scars from Adnan Ali’s recent kidney surgery are fading, but his emotional pain lingers.

Ali – who is unemployed, divorced and in his early thirties – recently found himself facing a stark choice. He could either sign up to fight with the Houthi rebels on the front lines of the war in Yemen, seek work in neighbouring Saudi Arabia, or sell his organs.

“There are no jobs, and my wife left me for another man,” Ali said despondently from his postoperative bed in Yemen’s Bani Matar district, southwest of the capital Sanaa.

After more than two years of war, many working-class Yemenis have turned to selling grocery items and khat – a mild, chewable narcotic – to make a meagre living. Others have opted to sell their organs to survive.

READ MORE: What it’s like to be a cancer patient in Yemen today

In Ali’s case, he told Al Jazeera that a Yemeni-Egyptian taxi driver who moonlights as an organ broker used to wait outside the Sanaa passport office, where he stalked and questioned Ali, then preyed on his financial insecurities, persuading him to sell his kidney. Ali had gone to the passport office with a plan to visit Saudi Arabia; upon discovering this, the broker showed Ali his own scars and said he had earned enough money from selling his kidney to get married and buy a car.

The broker organised Ali’s passport, contacted an Egyptian organ dealer, and created a fake medical report attesting that Ali was suffering from an illness that required travel to Cairo for medical treatment. The broker and Ali agreed on a $10,000 payment for Ali’s kidney, which was destined for an elderly man from Kuwait.

In Cairo, Ali recalled staying in a small, dilapidated rental apartment in the bustling Giza district for 25 days, while his expenses were covered by the trafficking ring. He was prevented from going outside.

Ali’s case is not unique. Although the scope of the organ trade among desperate Yemenis is unclear, other victims of trafficking rings told Al Jazeera that the networks operate anonymously in inconspicuous shisha bars and coffee shops in Yemen and Egypt.

Ali said that the doctor who performed his operation did not warn him of the potential consequences and there was no postoperative care. Patients are compelled to sign a contract that states, “It is not our responsibility if complications arise after the surgery,” he added.

“Once the surgery was done, and I received the money, I was on my own,” Ali said.

More than 20 million Yemenis currently need humanitarian assistance, according to the UN, while it is estimated that the Yemeni Central Bank’s foreign exchange reserves have dropped from $4.7bn in late 2014 to less than $1bn in September 2016. Salaries for health facility staff, teachers and other public-sector workers have been paid irregularly since September 2016, leaving more than a million state employees and their families without a regular income.

Wahag al-Maqtari, founder of the Sobol al-Haya Critical Care Hospital in Sanaa, told Al Jazeera that a majority of the victims of organ trafficking in Yemen are men, usually between the ages of 28 and 40. While he could not pinpoint how many Yemenis had resorted to selling their organs, he suggested that from what he has witnessed anecdotally, it appeared it was “being carried out on an unprecedented scale”.

The Yemen Organisation for Combating Human Trafficking, a Sanaa-based non-governmental organisation, has documented 300 cases of organ sales in Egypt since the start of the war in March 2015. This does not reflect a change from the previous five years, but according to the NGO, the real numbers could be much higher, as many cases are going unreported due to the illegality of the practice and religious concerns.

“Ninety percent of Yemenis who sold their organs have travelled to Egypt,” Nabil Fadhil, the organisation’s founder, told Al Jazeera. The most frequently traded organs include kidneys, liver lobes and corneas, and the price paid to the donor varies, he said.

There likely would have been more surgeries outside of Yemen had it not been for the airport closures implemented last year, but “some desperate families still make the journey”, Fadhil added.

Even if done inside Yemen, Maqtari said, the surgeries are carried out surreptitiously. “Patients don’t approach us directly,” he said. “They do this with the help of broker networks, and it becomes obvious.”

A few operations are done in big hospitals with proper medical care; the majority are done in unlicensed or makeshift operation theatres with inadequate equipment or staff, Maqtari added. Only 45 percent of the healthcare facilities in Yemen are fully functional.

Under the Transplantation of Human Organs and Tissues Act, approved by the Egyptian parliament in 2010, individuals who sell organs must be penalised – but a study carried out by the British Journal of Criminology in 2016 found that rather than tackling the black market organ trade, the law pushed the illegal practice further underground.

Elham al-Dulaimi, a doctor at the University of Science and Technology Hospital in Sanaa, told Al Jazeera that her facility upholds a stringent policy by which potential organ donors must obtain permission from judicial authorities before proceeding.

Fadhil said that he has documented cases in which Egyptian hospitals have bought organs from Yemenis for $5,000 and then sold them to affluent customers from the Gulf or Western countries for nearly $100,000.

Khat farmer Hussein Fari Mozghib, a waif-thin man from Ibb with piercing hazel eyes and a delicate bone structure, sold his kidney in October 2014. The $5,000 he received was enough to support his eight-member family for around six months.

His joy was short-lived, however, as his health started to suffer.

“I cannot carry items weighing more than 20 kilogrammes, and in the winter it hurts more,” Mozghib told Al Jazeera.

When the money ran out, he began working with the trafficking ring and referring cases, earning $1,000 for each person he sent to Cairo. He stopped after being arrested by Yemeni authorities.

As Yemen’s war drags on, the future is anything but certain. But for Adnan Ali, who will soon enter his second marriage with the woman of his dreams and launch a taxi service, there are signs of a brighter future.

“Arrangements are under way for the wedding,” he said, “and I am planning to buy a car to run a taxi.” 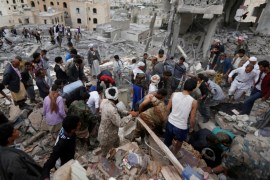 Children among dead in latest attack on Yemen civilians 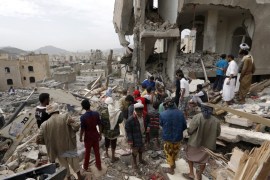