With Yemen mired in the third year of a war led by Saudi Arabia and its allies, the country’s population is facing a humanitarian crisis of unprecedented proportions.

More than 20 million Yemenis require humanitarian support, with nearly half of those in acute need of assistance, according to the United Nations. This year, a new wave of cholera cases further devastated the population, infecting hundreds of thousands of people and killing more than 2,000. Aid agencies have warned that without urgent action, the situation will continue to deteriorate.

Analysts have described the Saudi-led offensive in Yemen as a strategic failure, but although Saudi’s crown prince recently expressed his desire for an exit strategy, there is no immediate end in sight – and the humanitarian consequences will endure long after the bombs stop falling.

Al Jazeera spoke with Tarik Jasarevic, a spokesperson for the World Health Organization, about the impacts of the current cholera epidemic on Yemen’s vulnerable population.

Al Jazeera: What led to this outbreak in the first place, and what factors have fuelled its rapid spread?

Tarik Jasarevic: Cholera is endemic in Yemen. Two-and-a-half years of intense conflict have exacted a heavy toll on the country’s health system and water and sanitation services.

This is the second wave of an outbreak that started in October 2016. We are entering the peak season for the spread of diarrhoeal diseases in Yemen.

There has been a gradual disintegration of the municipal water infrastructure and systems in a context where few civil servants are being paid, and a relatively small trigger like a period of heavy rain or burst pipes creates a backflow of sewage into water pipes, an overflow of latrines and septic tanks, etcetera.

Al Jazeera: What areas of Yemen have been hardest hit, and can you describe some of the cases that you’ve come across in these areas?

Jasarevic: Cases are reported in 22 governorates and 300 districts, comprising more than 90 percent of Yemen. We frequently see children who come in to the treatment centres with suspected cholera who are also malnourished.

Malnutrition weakens the immune system of these children, while diarrhoeal diseases like cholera exacerbate malnutrition. It’s a vicious cycle in a country where 17 million people don’t know where their next meal is coming from.

Al Jazeera: This has been described as the world’s worst cholera outbreak. Can you put this into context?

In a roughly three-month period following the cholera outbreak in October 2010, Haiti had 50 percent more cases on a per population basis and over 200 percent more deaths.

Yemen’s current cholera outbreak is the largest in terms of scale of suspected cases at the current time, though not necessarily the largest historically. In any case, these comparisons are not meaningful. Comparing Haiti and Yemen is not helpful in describing either epidemic. What matters is the impact on the country, and we can see this is a heavy burden to bear.

Al Jazeera: What is the typical prognosis for someone who contracts cholera in a war-torn and resource-starved country such as Yemen?

Jasarevic: Cholera treatment is relatively straightforward: oral rehydration solution for mild cases and a combination of antibiotics and intravenous fluids for severe cases.

But cholera can also kill within hours if left untreated, and access to health services during conflict can be extremely challenging. In Yemen today, nearly 15 million people cannot access basic health services, and only 45 percent of health facilities are in service.

Less than half of the $190m that the WHO needs for an effective humanitarian response in Yemen for this year has been received.

Al Jazeera: Can this outbreak be brought under control, and what would be needed to make that happen?

Jasarevic: Our response to cholera in Yemen is working, but we must scale up. More than 99 percent of people who become sick with suspected cholera and who are able to access health services in time do survive.

To effectively end the outbreak, we must reinforce surveillance to detect and monitor the spread of the disease, expand access to clean water and sanitation and to medical treatment, and work with communities on prevention.

Individuals have an important role to play in keeping themselves and their families safe from cholera. Engaging communities is, therefore, a key pillar of the cholera response. WHO and UNICEF supported local health authorities to conduct a nationwide house-to-house awareness campaign from August 15-30.

Throughout the campaign, more than 13 million people in 21 governorates were engaged. Forty thousand volunteers travelled from door to door, providing information on proper hand-washing, preparation of oral rehydration solution, and proper home care of the people with cholera, including referral to health facilities. 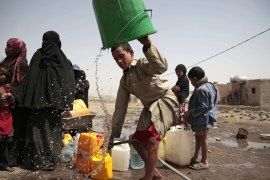 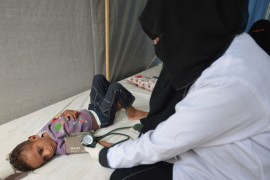