Mexico City, Mexico – US President Donald Trump is not known to be a defender of the underpaid, under-protected Mexican labour force, but his administration is making noises about the low salaries and lax regulations that workers in Mexico have to put up with.

There is a reason for that. The Trump administration believes low Mexican wages make for unfair competition for their own workforce and lure in companies that instead might have set up in the United States. With the North American Free Trade Agreement (NAFTA) on the negotiating table again after 23 years, the Trump administration, when they are not threatening to pull out of the trade deal, is looking to even up the playing field. The focus on salaries is likely to continue into the second round of renegotiations taking place in Mexico itself from September 1st to 5th.

They are paper unions - ghosts - because legally they exist, they cover all the legal requisites, but the workers aren't included in the process.

But while the US administration’s concerns over Mexican workers’ rights might not be altruistic, they do contain a basic truth. Mexican workers are, on average, the worst paid of the 35 countries in the OECD. Wages have stagnated. According to Mexico’s National Autonomous University (UNAM), the real value of the country’s minimum salary has dropped 60 percent in the past 30 years.

The reasons for that are complex, but labour expert Maria Xelhuantzi Lopez of UNAM says one issue lies at the centre of it all.

“The cause of the low salaries in Mexico is that there aren’t any unions that are regulating the working conditions or the salaries,” she says.

Since the 1980s, a phenomenon has exploded in Mexico – “protectionist” trade unions.

The unions work like this: a national or international company sets up in Mexico, and nine times out of 10, according to Lopez, rather than allowing the workers to actually form their own union, the company hires lawyers to produce a protectionist union.

These unions – which exist only on paper – sign a “collective” contract with the company and becomes the legal representative of the workers.

“They are paper unions – ghosts – because legally they exist, they cover all the legal requisites, but the workers aren’t included in the process,” Lopez says.

“Experts agree that 90 percent of the unions in the country (follow this model),” Lopez says.

It is clear, she says, why these protectionist unions have become so popular with employers. “What they do is to keep salaries low, maintain precarious labour conditions, keep workers rights to the minimum and increase the profits of the company,” she says.

Lopez says they are often formed before workers are even hired and always operate “behind their backs”.

READ MORE: What is NAFTA and why does Trump want it renegotiated?

International companies coming to Mexico have also learned that setting up a protectionist union is an easy way to guarantee cheap labour, according to labour expert Graciela Bensusan of UNAM university.

“Many multinational companies were complicit in this fraud,” Bensusan says. She adds that some multinationals are opting out of the protectionist model “but others keep using it, like in the auto industry”.

They made me join a union I never saw. What does that union do for the workers? Practically nothing. It's on the side of the company. It takes no notice when we ask for higher salaries and it lessens the benefits we get.

Leonardo Reyes, an employee for Honda

Mexico’s auto industry is a key component of NAFTA and many international market leaders have set up in Mexico.

Leonardo Reyes, 38, works for one of them – the Japanese company Honda in a plant in Salto, a town in western Mexico. He says that when he arrived at the firm 17 years ago a collective contract with a protectionist union was already in place.

“They made me join a union I never saw. What does that union do for the workers? Practically nothing,” he says. “It’s on the side of the company. It takes no notice when we ask for higher salaries and it lessens the benefits we get.”

Reyes says that when he and colleagues tried to form their own union they encountered resistance from the company.

“There were a lot of repercussions for the workers who did this. Some got fired, in my case I was the head of machinery and, after I entered the union, the coordinators and managers put me on the assembly line,” he says.

With a wage of around $2.25 an hour, Reyes is one of the better-paid workers in the factory. He says his lowest paid colleagues on the assembly line earn about $1.20. That is more than double the minimum wage in Mexico but a fraction of the $16 an hour earned by the lowest paid workers who are members of the US United Automobile Workers union.

Honda and the Mexican Auto Industry Association (AMIA) did not respond to multiple emails and phone calls requesting comment.

Al Jazeera also contacted the Confederation of Mexican Employers (Coparmex) for their perspective on protectionist collective contracts and unions.

“The posture of Coparmex is total respect for the labour law and for the punishment of any abuses,” said Coparmex spokesman Gustavo Almaraz in a phone interview.

The problem, according to labour experts, is that “ghost” unions, although unfair, are totally legal in Mexico.

This year, the government unveiled legislation that could in some way change that. It looks to regulate the creation, elections and activities of unions in Mexico.

But it has faced resistance, and not just from companies. The biggest alliance of Mexican workers’ unions is the Confederation of Mexican Workers (CTM). It acts as an umbrella organisation for the majority of the country’s unions and is especially powerful in the auto industry.

Labour experts have accused the CTM of taking the side of the companies and going against the very workers it is meant to support, and of having “ghost” unions in its ranks. Labour expert Bensusan of UNAM says: “The CTM’s first position was against raising the minimum salary. That doesn’t happen anywhere else in the world.”

In a press conference this August, CTM leader Carlos Aceves del Olmo was reported as saying that Mexicans earning the same as workers in the US and Canada was a “pipe dream”. Olmo’s office declined a request for comment.

A lack of transparency is a recurring theme in Mexican unions, even within the minority that are not “ghosts” and which do exist and work on behalf of employees. These unions are usually behemoths, made up of public sector workers. They grew up in a symbiotic relationship with Mexico’s Institutional Revolutionary Party, known as the PRI, which governed the country for more than 70 uninterrupted years until 2000.

The only thing we can thank President Trump for is the fact that he's making us have a national debate over our economic model.

There is a name for them, too – “charro”, meaning cowboy.

According to Lopez, the labour expert at UNAM, the moniker is appropriate for the union leaders, who grow rich off membership fees.

“There’s no transparency. In most cases, the money goes to towards union corruption, to the pockets of the leaders,” she says, adding that this is not their biggest money spinner and that most of it come from kickbacks.

“More comes from the same companies that the unions are meant to counterbalance. It’s hidden in collective negotiations,” she says. “That’s the piggy bank of the union leaders and the most powerful cases are when the company has given houses or land to the union.”

The leader of the teachers’ union – Elba Esther Gordillo – has become an emblematic case of corruption. Gordillo is connected to three mansions in San Diego in California (one of which was valued at $4.7m and included a jet ski and a boat), and in 2008, she handed out 59 Hummers to loyal union subordinates. She was eventually imprisoned in 2013 for racketeering and money laundering.

Oil workers’ leader Carlos Romero Deschamps has also become known for his penchant for luxury yachts and apartments. Various national media outlets reported that he gave his son a Ferrari valued at around $2m. All this on a salary which, last time he allowed it to be known, was around $1,200 a year.

Protection for corrupt union leaders doesn’t come just from the companies that benefit from their tractability, but also from the political class – while the leaders make it worth their while. The most famous case of illicit payment from a union to political parties came again from Deschamps’ oil workers’ union. In the presidential campaign of 2000, they illegally supplied more than $120m to the candidate of the ruling PRI.

But the long entrenched alliance of union leaders, companies and politicians could now be under threat from outside of the country.

When NAFTA was signed in 1992, agreements over labour rights were placed in a poorly enforced sidebar to the main text. Now the US administration is pushing to bring those sidebar policies into the main NAFTA text, forcing the Mexican government to ensure the “effective recognition of the right to collective bargaining”.

The irony that it’s President Trump, little loved south of the US border, who is pressing for more rights for Mexican workers is not lost on Bensusan.

“The only thing we can thank President Trump for is the fact that he’s making us have a national debate over our economic model,” she says.

For labour experts, despite the US government’s ulterior motives, it still provides hope that the NAFTA renegotiations might be the spur needed to act against “ghost” unions and get a better deal for the country’s workforce. 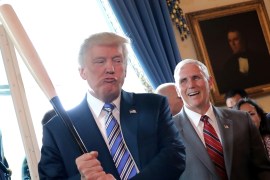 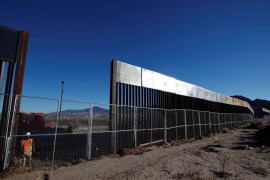 What’s behind the Great Wall of America? 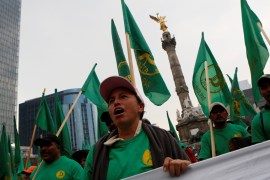