There is something romantic about being out on the remote steppes of Mongolia. Flaming sunsets burst across the vast plains with their endless views. Wild horses gallop past, kicking up trails of dust.

Together with the 101 East film crew, I am headed east in a four-wheel drive to the home of a nomadic herder named Bilguungerel, also known as Billy. The road ended two hours ago and there are no signs, landmarks or internet to guide us here, but we keep going. The isolation feels like freedom.

“How far away?” I ask our local guide.

I try again. “How long till we reach them?”

“Maybe five more hours. Why do you like to be so precise? We are not used to that,” the guide says, laughing. Time and space are treated differently here. It’s difficult to stick to a schedule.

We spend the next 10 days sharing the ger – a round tent traditionally used by nomadic families in Central Asia – occupied by Billy, his wife and three children. We follow Billy on his daily chores, tending to his herds of horses and goats. I wonder how the family feels about having a whole crew of outsiders suddenly descend on their lives.

Billy’s family wake and sleep with the sun and the summer days are long. It has been exceptionally dry this year so they have to work hard to feed and water the herds.

Billy owns 200 horses which roam wild on the steppes.

“We love our horses, they are our friends,” Billy explains.

Five of them are especially dear to him and are never far from sight: they’re his race horses which he has been preparing for this year’s Naadam festival. The horse races at the festival are a celebration of thousands of years of Mongolian tradition and there’s a lot of pride riding on the event.

This year, Billy’s five-year-old son, Babu, will make his debut as a jockey.

Every morning and evening, father and son are out on the steppes training the horses on 20-kilometre runs. Babu rides, with his father following beside him on a small motorbike. After months of preparation, the big day is just a week away.

‘If he lasts the night, he will live’

One day, the hot and arid weather takes a drastic turn. The rain doesn’t stop. That night, as temperatures plummet, a horse becomes ill.

Outside, under the full moon, it is freezing. The sick horse is writhing on the ground, a pool of blood beside it. Billy pours two cups of vodka and holds them below the horse’s nostrils. He tells me that the fumes help to stir the horse.

The children huddle around the animal, watching intently. No one speaks and the wind is deafening. When there is nothing more to be done, they get up and go inside.

“If he lasts the night, he will live,” Billy says. The mood is sombre, but more accepting than sad.

Billy expects that half of his livestock will die this coming winter, when temperatures will drop to -40 degrees Celsius. This is the harsh reality of life on the steppes.

Faced with mortality, I am reminded of the remoteness of our whereabouts. The next family lives more than an hour’s drive away. The distance to the nearest town, where the family buys fuel and water, is similar.

There is a hill nearby that the family can hike up to get a phone signal to make calls. We are hours from the nearest hospital.

The next morning, we find the young horse survived.

Days later, the weather improves, just in time for Naadam.

Dressed in their Sunday best, the family heads out to the festival to watch Babu’s first race. He’s excited, but it’s a heart-stopping event.

Competing against more than 60 riders, the young jockey’s feet slip from the stirrups. We watch from the car with Billy as he drives alongside the 24-kilometre open track.

Anxious, Billy calls out to his son. Babu does well among the pack and comes in sixth. He’s proud of himself, and so is his family.

That afternoon we say our goodbyes in the family’s makeshift tent at the festival site. Plates of deep fried pastry and bowls of vodka make the rounds. It’s a celebration and everyone is in good spirits.

We pass the breathtaking landscape on the long drive back to the capital, Ulaan Baatar. This time, I have seen enough to know that life on the Mongolian steppe is not all that romantic – but the reality is even better. 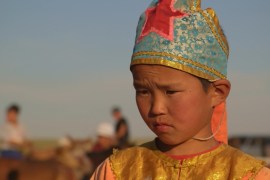 In Mongolia, child jockeys are dying and suffering painful injuries in some of the world’s longest horse races. 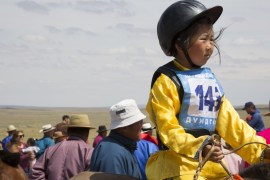 ‘If we don’t have horses, we’re not Mongols’