British police have launched a fresh appeal for information on the murder of a famous Palestinian political cartoonist in London 30 years ago, hoping someone might feel more able to speak up three decades later.

Naji Salim Hussain al-Ali, who received a number of death threats for his cartoons satirising Arab and Israeli politics, was shot in west London on July 22, 1987.

He died in hospital just over one month later, aged 51.

Scotland Yard’s Counter Terrorism Command (CTC) is appealing for information about the gunman and a second man later seen driving away from the scene.

“The brutal murder of Mr Al-Ali devastated his family and 30 years on they continue to feel the loss,” CTC commander Dean Haydon said.

“A lot can change in 30 years: allegiances shift and people who were not willing to speak at the time of the murder may now be prepared to come forward with crucial information.”

Speaking to Al Jazeera, al-Ali’s son said that people with influence may have withheld information crucial to finding out who was behind his father’s assassination.

“There were people active on the political scene at the time – who still are to a lesser extent – they have information which they did not share,” he said.

Al-Ali’s cartoons were often depicted from the perspective of Handala, a small refugee boy that always had his back turned as a symbol to the unrealised right of return for Palestinian refugees.

The cartoons were perceived as critical of the Palestine Liberation Organization leadership, as well as Israeli and Arab governments; they won him international acclaim but also resulted in a number of death threats made against him.

“My brush is my only weapon, I use it to stand against the vicious forces of evil in our world,” al-Ali once said.

The police said they were keeping an open mind about the motive for al-Ali’s killing.

He was shot in the back of the neck in broad daylight while walking from his car to the Knightsbridge office of Kuwaiti newspaper Al-Qabas, where he worked at the time.

He was described as about 25 and of Middle Eastern appearance, with thick, collar-length black hair that was wavy at the back.

The black automatic handgun, a 7.62 Tokarev pistol, was found on open ground in London in 1989.

Test firings showed markings on the bullets that matched those on the cartridge case recovered from the murder scene.

A second man, described as being in his 50s and of Middle Eastern appearance, was seen running with his left hand inside the right side of his jacket as if he was concealing something, and getting into a silver-grey Mercedes car shortly afterwards.

The police believe the second suspect was hiding the weapon in his coat.

Witnesses also reported seeing another man, in his 50s and also of Middle Eastern origin, running nearby shortly after the incident, with his left hand inside his jacket as if concealing something.

He then got into a silver-grey left-hand drive Mercedes and drove away.

“Speculation has raged for many years over who might have ordered the killing,” said Al Jazeera’s Paul Brennan from London.

“At the time police arrested several suspects with links to the PLO and Israeli Mossad but with little in the way of hard evidence. No one has ever been charged with the murder.”

Commander Dean Haydon, head of the Met’s Counter Terrorism Command, which is reviewing the case, said the police have “followed a number of lines of inquiry which have not resulted in us identifying these two men”.

“Allegiances shift and people who were not willing to speak at the time of the murder may now be prepared to come forward with crucial information.” 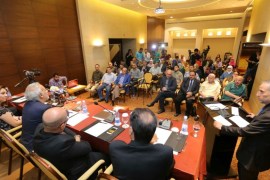 The Media Creativity Award for Palestine aims to highlight unconventional depictions of the Palestinian cause. 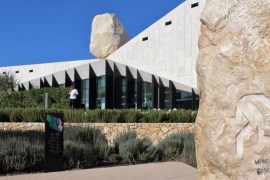