Somebody upstream calls and the team rushes forwards, rolling out a body bag as they do so.

A man is standing on the riverbank pointing to a ball of branches, mud and plastic. He gestures that there is a bad smell.

The body collectors wade through the water and start searching under the rubble. After five minutes one of them pulls out a foot; mangled, white and rotting. They drop it into the body bag.

This group of volunteer body collectors, all of whom are young men from neighbouring communities, has been working for seven days to gather the remains of those killed by a deadly mudslide in Sierra Leone on Monday, August 14.

So far, 499 bodies have been unearthed. More than 600 people remain missing. Those who know the affected communities estimate that the real number of victims could be well over 1,000.

“The problem,” says body collector Mohamed Jalloh, “is that many of the bodies were torn up by boulders and trees.”

READ MORE: Sierra Leone mudslide: What, where and why?

After weeks of heavy rain, the side of Sugar Loaf Mountain collapsed, crushing the settlement below called Regent.

The mudslide sent a torrent of water, mud and rocks tumbling down the valley and swept away houses in two other communities; Kaningo and Kumayama.

Some of the people living higher up the riverbanks were able to escape their flooded houses by climbing onto their roofs. But those on the lower flats had no chance.

With body parts still strewn around the riverbanks a week after the disaster, there is a high risk of diseases, including cholera and typhoid, spreading.

The Ministry of Health has issued a statement urging the public to “drink only water collected from a safe source” and to “wash all fruits and vegetables well with clean water before eating”. They say that this will help to reduce outbreaks of water borne diseases.

In Regent, volunteer body collector Aruna Momoh says they are still unearthing body parts. “There are still people buried,” he says. “We have managed to get the ones in shallow ground out, but there are more deep down.”

He has been at the site every day since the disaster. “I live nearby and rushed here on the morning of the mudslide. It happened around 5:45am. By the time I reached there were government ambulances and NGOs. Machinery didn’t arrive until Tuesday. By Thursday the place started to stink, the smell of rotting flesh was everywhere,” he says.

Fesellie Marah, a young man from Kumayama, says that ambulances and stretchers didn’t reach his community until Monday afternoon. “All we had were gloves and some lappas [sheets of colourful material]. We were pulling masses of bodies out of the rubble and piling them up in the front room of a broken house,” he says.

“We’d use the lappas to collect body parts – feet, legs, hands … once they were full, we would tie them up and put it in the same room as the bodies. In the afternoon government ambulances and The Red Cross came and collected the corpses.”

READ MORE: Is climate change to blame in Freetown?

He remembers how families were crowding the bodies, crying and screaming. Some were trying to identify their family members, but it was almost impossible because of the condition the bodies were in. Many were crushed, and they were all covered in mud.

Marah says he saw a boy being swept down the river, screaming and holding on to a floating fridge. “We couldn’t reach him, but we were all shouting encouragement, telling him to hold on tight. Further downstream he caught on to a palm tree and managed to climb out. He survived.”

In Kaningo, Mohamed Jalloh and his friends are still working to collect bodies. Jalloh works as a night guard in an NGO’s compound. Since the mudslide, he has been working his regular job at night and collecting bodies by day.

“Since Monday I have hardly slept,” he says. “Each day I finish work at 6:30am and come here by 7. Then I sleep for just two hours in the late afternoon. I have so much sympathy for my brothers and sisters who were killed. I want to help reduce the health risk by collecting all the body parts. If we sit down and do nothing, then more people will die from diseases.”

Although Jalloh and his colleagues have worked hard to try and collect all the corpses from the wreckage, there are still decaying body parts strewn around, one week on.

Further down the river, a group of boys is watching a dog eat something beside a pile of muddy branches and plastic. A sharp, sickly smell hangs in the air. The dog is chewing on a piece of human flesh.

“There are bodies under there,” says one of the boys, pointing to the rubble. “But we can’t get to them, the dogs went in and started pulling out bits of bodies.”

An old man arrives, groans in disgust and throws a stone towards the dog. It runs away, dropping the muddy flesh on the ground. 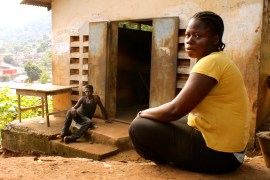 Sierra Leone is Ebola free but a legacy of fear remains

The deadly virus crippled the country’s healthcare system, with grave consequences for maternal and infant health. 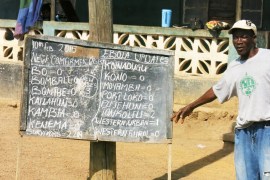