Billowing clouds of smoke cloaked the sun, orange flames sprang dozens of feet into the sky, and the stench of petrol hung in the air. Everywhere Muhamed Oussama looked, it was apocalyptic.

For several months, this was the daily grind for Oussama, a 38-year-old Iraqi firefighter from Kirkuk.

Oussama, who works for the firefighting division of the Iraqi civil defence department, was one of hundreds of Iraqi firefighters on the front lines, extinguishing dozens of massive oil fires that the Islamic State of Iraq and the Levant (ISIL, also known as ISIS) set last summer during the group’s retreat from Qayyara to Mosul. The infernos transformed the oil-rich Qayyara region and its countryside into a fiery hellscape.

Oussama had been fighting fires for about a decade, but the sea of flames staring him down was unlike anything he had laid eyes on. It was like teetering on the edge of a volcano.

“I was afraid that I might die many times,” he recalled. “You do not know when you might die. The fires were huge.”

Qayyara had been a strategic stronghold for ISIL where oil was a crucial source of income. But torching the wells was also strategic. It offered the group cover from coalition air attacks for their withdrawal to Mosul. In that, they succeeded: The towering plumes of smoke were so monstrous, they could be observed from space by a NASA satellite.

IN PICTURES: ISIL’s blazing trail of destruction in Qayyara

ISIL also littered the areas around the raging oil fires with landmines and explosives, adding a further element of danger to Oussama’s already treacherous job.

One day, a friend of his and fellow firefighter, Mohammed Jarallah, fell into a sulphur pocket near one of the blazes and died.

“Something went wrong then, and he rushed to help trapped civilians and other firefighters, and then he died after saving them,” he added. “[He] fell inside a sulphur pocket fighting these fires. He died leaving five children behind.”

Oussama was torn. Firefighting in an active war zone was taking its toll.

“We used to eat and sit down together, and [it] was hard to lose him,” he said.

In March, Iraqi firefighters successfully doused the fires. They sprayed large volumes of water on the well heads and used wet sand to smother burning pools of tar surrounding the well heads.

But ISIL’s blazing footprint on the region is still smouldering in the wake of the oil fires. The fallout has been tremendous.

The roughly 37,000 people who live in the vicinity of the fires in the Qayyara region now also face potential long-term health risks.

“The fires affected my daily life gravely,” said Hamdi Jasim, an Iraqi teacher and father whose house was roughly a kilometre away from one of the burning oil wells. His children complained of skin irritation due to the smoke and were unable to go to school, he said. Despite the health risks from living in such close proximity to the blazes, he and his family could not afford to relocate.

“The children got sick, and there was not enough money to treat them because we were living under ISIL control,” he said. “I could not treat them. They are everything to me.”

Ethar Sadoun, 24, also a Qayyara resident, retreated to a nearby town.

“The plumes of smoke [were] hazardous to health, which led us to move out,” he said.

Sadoun has since returned to Qayyara, but traumatic memories linger. At the height of the fires, houses were begrimed by the smoke. Gobs of oil rained down from the sky. The wool of local farmers’ sheep and mountain goats turned black. Inky films of grease clung to clothing and skin. Children, accustomed to the sites and sounds of war, frolicked in the glow of the fires, kicked footballs around and scurried back and forth with toy guns clenched in soot-stained hands.

Even the tap water ran black.

“You feel the grease inside you, almost,” said Joey Lawrence, a Canadian photographer who travelled to Qayyara to photograph the oil fires. “Imagine being someone that lives right next to it and breathes it in, 24 hours a day – what kind of health risks that would create. It’s insane to think about. It’s probably as bad as smoking a thousand packs of cigarettes.”

The smoke was so thick that one morning, Lawrence had to use a flashlight to put his camera gear away. He said it was like being trapped in a giant oven.

“This place looked like Mordor,” he said, comparing the Iraqi countryside to the nightmarish terrain from JRR Tolkien’s Lord of the Rings novels.

“The effects that [the fires] were having on people’s health was really quite shocking,” said Amy Christian, a spokesperson for Oxfam who helped coordinate humanitarian aid during the crisis.

Christian, who is based in Erbil, spent several days in the region – and she, too, was afflicted by the treacherous conditions. Her clothes felt sticky after a few hours. After a day or two, she had difficulty breathing and suffered severe headaches and nausea.

“When I cleaned my teeth at the end of the day, the toothpaste I spat out was black,” she said. “You can imagine how much was going into my lungs, and into my stomach, and into my body from breathing it in for those short few days.”

Christian got to know several families in Qayyara during her work there. An elderly man in one family, who previously had respiratory issues, died in the midst of the blazes, she said. The family suspected that the oil fires cut his life short.

Clinics in the region were overloaded with patients suffering from shortness of breath, dizziness, headaches, fatigue, stomach problems and exacerbated asthma attacks.

Tayseer Alkarim, an oncologist who treated hundreds of people affected by the fires, said at the time that “intensive pollution” was affecting almost everything, including people, animals, plants, soil, air and water.

Between September and November 2016, Alkarim estimated that he was treating 90 patients a day in relation to the fires. His medical team distributed 25,000 paper masks to people in the area. Alkarim, too, was struck by prolonged fits of coughing due to the smoke.

Even though the fires have since been extinguished, Alkarim said the region’s population faces an impending health epidemic.

The ISIL oil fires hearkened back to images of the Gulf War in 1991 when Saddam Hussein’s forces lit 750 oil wells on fire in Kuwait. Approximately four to six million barrels of crude oil burned each day, staining the desert sands black.

“The [US] veterans of the Gulf War did see some immediate reactive airway diseases,” said Greg Gray of Duke University’s School of Medicine, who authored medical reports on the long-term effects that the Kuwait oil fires had on US soldiers’ health.

Gray said that he was unable to confirm any long-term impact on soldiers’ health stemming from Kuwait’s Gulf War oil blazes. Nonetheless, the doctor was adamant that local Kuwaiti populations there might not have been so lucky – and that Iraqi villagers in Qayyara today could be at serious risk for increased levels of disease due to their exposure to the oil fires ISIL set.

“It’s biologically possible that intense exposure to smoke from such fires could [do long-term] damage [to] the lungs,” he added. “There could be acute and long-term exposure manifestations, but it’s difficult to assess.”

The Kuwait oil fires remain one of the worst man-made environmental crises in history – and one that parallels the disaster in Qayyara. During the Kuwait oil fires, regional surface temperatures dipped far below normal. Simultaneously, smoke prevented heat from exiting the atmosphere.

Scientists consequently warned of an extensive rise in global warming due to a five percent increase in carbon dioxide and greenhouse-gas emissions. Others predicted conditions mirroring a nuclear winter.

The ISIL oil fires in Iraq have not triggered as widespread a panic in the scientific community, but the environmental fallout in Qayyara still looms.

“What is clear, is that there will be a deposition of this black carbon and sulphur dioxide within a few hundred kilometres downwind from the sites,” said Vincent-Henri Peuch, a United Kingdom-based environmental scientist with the Copernicus Atmospheric Monitoring Service.

Peuch, who studied the Iraq oil fires using satellite technology, said that he detected and tracked as many as 100 fires in Qayyara.

“This can affect a number of things: the ecosystems, the crops,” Peuch said. “Some of the crops may be damaged, so there will be an impact when the plumes land again. These soot and sulphate particles will go on the ground, affecting the vegetation and agriculture.”

Like the Kuwait oil fires, Peuch said that the Qayyara blazes generated a noticeable jump in carbon dioxide emissions. Comparatively, he noted that the Qayyara oil fires had a slightly less atmospheric impact than the deadly wildfire in January that recently displaced thousands in Chile.

For Oussama, the Iraqi firefighter from Kirkuk who dodged landmines and risked his life to extinguish the ISIL oil fires, smothering the flames in Qayyara was not only a joyous moment but a symbolic one as well.

“I was very happy,” he said. “It’s considered a victory for the government against ISIL. It’s proof for other countries so they can know how resilient Iraqi firefighters are.”

Looking towards the future of Qayyara, he said that now the challenge lies with cleansing ISIL sympathisers from the region in order to build a new generation for his country. But the accomplishment of toppling Iraq’s oil fires – and his sacrifice – is bittersweet. Something else about what lies ahead now torments him.

“I don’t know If I have developed some sort of an illness that’s due to being exposed to fumes and gases,” he said. “I [inhaled] gases, and any hidden illness might show now and maybe in the future.” 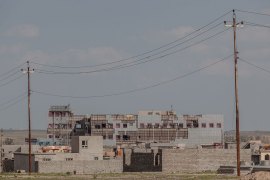 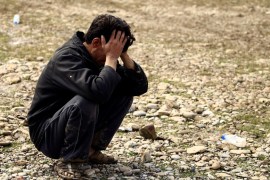 Iraqi families with relatives affiliated to ISIL are struggling to find a place for themselves in their own country.