Hebron, occupied West Bank – For weeks, members of the Abu Rajab family have been confined to their home in the heart of Hebron’s historic Old City.

They cannot leave for fear that settlers will occupy the house. When absolutely necessary, one family member takes a short trip to buy food or other necessities, before hurrying back inside.

“We’re always careful about going out and coming back in, and we make sure not to leave the house alone,” Hazem Abu Rajab, 28, told Al Jazeera as he sat outside on their porch.

On July 25, a group of 15 settler families broke into apartments belonging to the Abu Rajabs’ ancestral family home and moved in. The same evening, the settlers physically attacked members of the Abu Rajab family while attempting to invade their primary residence. Yet when Israeli authorities arrived on the scene, they attempted to arrest the Abu Rajabs, they said.

For six days, the Abu Rajab family could not leave their home at all, due to a military order that forbade anyone from exiting or entering, Abu Rajab said. The Palestinian Civil Administration tried to deliver food on the fourth day but was turned away.

The property the settlers forcibly took over remains the subject of a legal dispute. The same settlers occupied the home once before in 2012, claiming they legally bought the property – an allegation that the Abu Rajab family denies. Israel‘s civil administration ruled that the settlers have been unable to provide proof of their purchase and the Israeli high court ordered them to leave. The property has since been declared a closed military zone.

Last month, the civil administration agreed to hear the settlers’ appeal of the decision. In the meantime, the settlers have continued to illegally occupy the home.

Amid Israel’s security measures, which include movement restrictions for Palestinians, in addition to harassment from settlers, many Palestinians have moved out of the Israeli-controlled H2 area of Hebron.

According to a 2007 report by Israeli human rights organisation B’Tselem, 42 percent of Palestinians living in H2 – more than 1,000 families – have left their homes since 1994.

In 1997, the Hebron Protocol divided the city into two areas: H1, controlled by the Palestinian Authority, and Israeli-controlled H2, which includes the historic Old City. Some 600 settlers live illegally in H2, under the protection of thousands of soldiers.

“[The harassment] is part of their plan to empty the area and replace it with settlers. The last attack was just yesterday. The settlers attacked our neighbour’s house. They were throwing stones from the roof [across the backyard] and hit a 10-year-old girl while she was in her garden, injuring her in the head.”

Settlers regularly throw rocks at the Abu Rajabs, and a soldier peed onto their backyard from the top of their building’s roof, he said. Their settler neighbour has also poured skunk water on them.

According to Israeli human rights organisation Yesh Din, there has been no progress over the years in terms of holding settlers accountable for their violence. Only eight percent of cases monitored by Yesh Din between 2013 and 2016 led to the prosecution of offenders.

About 100 metres from the Abu Rajab home, children play in front of 41-year-old Nael Fakhuri’s house, inside what appears to be an outdoor fenced-off enclosure. In 2012, Israel erected a fence along the road outside his home, which leads to the Ibrahimi Mosque. The road was divided into a broad, paved street accessible to Jews, and a derelict side pathway accessible to Palestinians.

An extension of Israel’s “discrimination fence” and a gate added in front of his home in May has made Fakhuri feel besieged. A loud alarm sounds each time the gate opens.

“When the cage is closed, it’s as if we’re living in the heart of a prison,” he told Al Jazeera. “The Israeli army sometimes opens the gate at 7, sometimes at 8, 9 or 10am; it depends on their mood, and they close it when they want.”

Fakhuri used to head to the market every morning at 5am to buy items and sell his sheep, but he can no longer do so because of the locked gate. He says this has caused a 70 percent drop in his profits. To feed his sheep when the gate is locked, he must take a detour of about 600 metres around the neighbourhood; his sons help him drag a cart up and down sloping alleys and stairways made out of bumpy stone. His herd has dwindled from around 65 sheep to about 15.

According to B’Tselem, such restrictions are further isolating Palestinian neighbourhoods in an attempt to push Palestinians out of the area.

“These drastic measures, which have taken a toll on tens of thousands of Palestinians, constitute collective punishment. The Palestinians who still live in the area are denied the ability to lead normal lives and their daily experience is unbearable,” B’Tselem said in a statement. “In imposing this policy, Israel is effecting a silent, ongoing transfer of Palestinians from the heart of Hebron.”

The Israeli army did not respond to Al Jazeera’s request for comment on the matter.

“They’re surrounding us more and more so we [will] leave the area,” Fakhuri said, noting that he has seen 15 to 20 families move away from his neighbourhood in the past year.

The Palestinians who remain in the Old City are either too stubborn or too poor to move away. Abu Rajab says that no matter how tough life in H2 gets, he will never give up his home. He recalls growing up in Hebron when the markets were thriving and the streets were bustling with hundreds of people.

“We didn’t see any settlers here before,” he recalled. “[This neighbourhood] was one of the most beautiful and vibrant areas in Hebron.”

Today, it resembles a ghost town, with abandoned homes and closed shops lining the streets. Israeli flags hang from both sides of his house and roof.

“It’s impossible to even imagine leaving my house. It’s a part of our family history. This house is more than 650 years old; my ancestors built it,” Abu Rajab said. “We’re not going to leave at all. The settlers have to leave.” 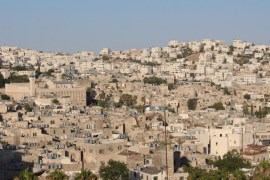 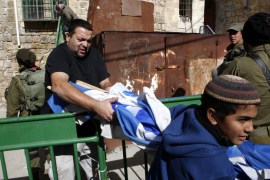