Nikki Haley, the US envoy to the United Nations, made headlines in June when she denounced what she claimed was a pattern of “anti-Israel” behaviour at the UN.

“I have never taken kindly to bullies, and the UN has bullied Israel for a very long time,” she said. “We are not going to let that happen any more. It is a new day for Israel in the United Nations.”

While Haley’s words were music to Israeli leaders’ ears and echoed long-standing talking points of pro-Israel advocacy groups, analysts say there is little substance to her allegations that, in the words of Israeli President Reuven Rivlin, Israel has been “the UN’s punching bag”.

According to human rights lawyer Noura Erakat, the attention given to Israel/Palestine at the UN harkens back to a particular historical moment in the 1960s and 1970s, when “national liberation movements and newly decolonised countries used the UN as a site of protest” against “imperialistic” Western politics.

While issues concerning Namibia, South Africa, Cape Verde, Vietnam, Laos and others have in one way or another been resolved, Erakat told Al Jazeera, “the only one that hasn’t is Palestine”.

In 2016, the UN Security Council’s activity focused on the likes of North Korea, the Democratic Republic of Congo, Mali, Somalia and Libya. Sudan and South Sudan produced the most Security Council resolutions last year, with 11, while just one resolution dealt with Israel and the occupied Palestinian territories. It was the first in almost eight years.

It is a different story, however, elsewhere within the UN, where Israel faces frequent condemnation for its actions through bodies such as the UN Human Rights Council and the General Assembly.

“But this must be viewed in the context of the UN political organs as a whole,” Dugard added. “The Security Council and Quartet on the Middle East [UN, European Union, United States and Russia] are notoriously pro-Israel and refuse to pay adequate attention to Palestinian issues.”

The UN’s top official for the Israeli-Palestinian conflict is the United Nations Special Coordinator for the Middle East Peace Process, an office that “represents the secretary-general and leads the UN system in all political and diplomatic efforts related to the peace process”. The post comes under the authority of both the secretary-general, as well as the Department of Political Affairs (DPA), headed by US diplomat Jeffrey Feltman.

During his time as Special Rapporteur, Dugard told Al Jazeera that some senior officials in the DPA “made no attempt to conceal their pro-Israel feelings to me”. He believes that more attention should be paid to the “bias” of the Security Council, Quartet and Secretariat.

In 2007, then-outgoing Special Coordinator Alvaro de Soto said in a leaked “End of Mission Report” that US and Israeli pressure was compromising the ability of the Quartet, and the UN, to act even-handedly in Middle East negotiations.

The current UN envoy, Nickolay Mladenov, is unlikely to make such complaints; he has made no secret of his admiration for Israel as a “strong democratic country“, while as Bulgarian foreign minister in 2010, Mladenov visited the region and “made extremely friendly public comments about Israel at a time when such comments from foreign ministers around the world [were] anything but the norm”, according to a report in The Jerusalem Post.

Recent months have seen an uptick in anti-UN hostility from Israeli officials. In March, UN official Rima Khalaf resigned from her post as executive secretary at the UN Economic and Social Commission for Western Asia (ESCWA) after the secretary-general’s office forced the withdrawal of an ESCWA-commissioned report on Israeli apartheid. A subsequent ESCWA report on the effect of the Israeli occupation was denounced by Israel’s ambassador to the UN as a “blood libel”.

In June, Israeli media reported that the foreign affairs ministry was demanding that the UN terminate the contract of senior humanitarian coordinator Robert Piper, under threat of revoking his visa. Piper was deemed to have overstepped by describing the 50-year occupation of the West Bank and Gaza Strip as “ugly”. The same month, Netanyahu called for the dismantling of UNRWA, the UN refugee agency.

Such attacks have led some to question Haley’s claims that Israel is a victim of bullying, rather than the bully. In 2015, Israeli officials reportedly threatened UN staff in a successful attempt to prevent the Israeli army from being listed as a serious violator of children’s rights. Dugard’s successors have also faced detention and denial of entry.

Noting how the US has protected Israel in the Security Council through its veto (or threat of veto), a Western diplomatic source told Al Jazeera that “over substantive reports or initiatives critical of Israel, the US and Israel always exert high-level political pressure and the office of the secretary-general usually buckles”, leading “to a serious credibility gap for the UN”.

When Haley, Netanyahu and others make the accusation that everyone is singling out Israel, Erakat said, “in fact, the exception is made in the reverse direction – Palestine is singled out from similar treatment to other colonies or other peoples living under foreign domination and subjugation. Palestine, like other sites of settler-colonialism, remains an exception to the world order.” 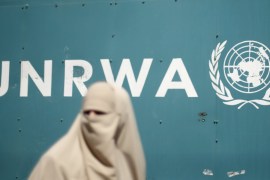 Why is Netanyahu trying to disband the UNRWA?

Israel wants to dismantle the UNRWA because the agency keeps Palestinian’s right to return to their homeland alive. 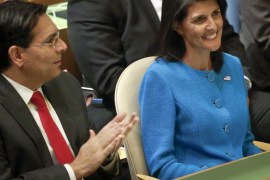 Inside the US fight to fix Israel’s global standing

US and Israel lead a campaign of intimidation against the UN to forcibly rehabilitate Israel’s international standing.