Less than half of Lebanon’s school-aged Syrian refugee children enrolled in school last year, and it is expected that at least 50 percent will drop out of classes by the time they are nine years old. Half of the remaining number will leave school by 10, according to the United Nations.

Transport, regardless of how low the price, is often unaffordable. Language can be a barrier, as some subjects in the Lebanese curriculum are taught in French or English, and in other cases, parents worry about bullying. Many times, girls are expected to stay home to assist with chores, while boys are expected to work and provide for their parents.

Odey, Mohammad and Saddam are just three among thousands of Syria’s lost generation.

In a makeshift schoolroom inside an apartment in the southern suburbs of Beirut, children are busy memorising their ABCs when a young boy enters to make an announcement: He is leaving classes to go to work.

“I will not have time for school any more,” said 12-year-old Odey, noting that he would be dropping out of the programme that was supposed to prepare him for the official Lebanese school system.

His family left Aleppo more than a year ago and found a home in Beirut for around $300 a month. Six children, along with their parents and grandmother, share a concrete cube in the Shatila Palestinian refugee camp.

“Dad has diabetes and needs insulin. Grandma broke her back and had a surgery. She is in very poor health. It costs a lot to take care of them,” Odey said. “We have to work. Every family member has to work as much as possible. I am paying for the daily expenses and my dad is saving to repay a debt.”

Their rent has not been paid for almost a year. Debts are piling up, and Odey’s job brings an indispensable $6 home each day.

It is not hard for children to find work in Shatila. Butchers, grocery stores and coffee shops all welcome cheap labour to carry around boxes, fill shelves and sweep floors. Odey, who works in the market, spends 12 hours each day emptying boxes and making sure that new products are properly arranged.

Although he admits that he would prefer school, he does not dwell on his future: “I do not know what I want to be when I grow up. What if I die before? When I grow up, then I will decide what I want to do.” There is no sadness or fear in his voice.

His mother is acutely aware of how badly the family needs the extra money. “Two of my younger sons also work. They are 10 and seven,” she told Al Jazeera. “My husband works occasionally, when his health allows him to, but that is not enough. And I cannot work because someone needs to take care of the youngest children.”

Her eyes roam the floor of the cramped room as she speaks. “Life in Lebanon is extremely hard,” she added. “But at least [it’s] not as dangerous as in Syria.”

Their home was destroyed by bombs and there is not much left to go back to, she said. For Odey, his family’s old life is something he avoids thinking about.

“Nothing makes me afraid,” he said. “We just need to pay the rent.”

When Saddam grows up, he wants to own a grocery store, just like the one where he has worked for the past four years – ever since his family left their home in Syria. Twelve years old, he has not spent a day of his life in a formal school.

“Every day, I wake up at 8am and then I go to work, where I clear empty boxes or put products on shelves,” he told Al Jazeera. “I come home around 8pm. After dinner, I go to sleep and the next day is the same.”

This weekly routine earns him $43; it does not even cover the family’s rent.

Saddam’s father, who is ill, spends most of his time aimlessly roaming the streets of southern Beirut and occasionally helps clean a nearby mosque. His mother has heart problems, diabetes and hypertension. They have nine children, four of whom are married with their own family responsibilities.

The UN helps them with food, but it is never enough. The family quickly burns through its $189 monthly food card.

“Saddam has to work simply because we are poor,” said his mother. “I am afraid about his future. I can see his childhood is far from normal, but there is nothing we can do about it. He needs to work.”

A shy, introverted boy, Saddam has been changed by the war. He speaks quietly and is an easy target for bullies.

“I am sad because I cannot go to school. But the boss is good; he does not make me work very hard and I do not get too tired,” he said with a smile.

Still, not a day goes by that he does not wish he was back in prewar Syria.

“Syria is better than Lebanon. I was born there and I felt comfortable there. I had friends. I wish we would go back, but it is impossible because of the war,” he said.

Since the war began, thousands of Syrians have flooded into Shatila, which was already crowded with Palestinian refugees. The camp provides some of the cheapest accommodation options in Beirut; some of the apartments have no windows, and makeshift bathrooms often leave waste flowing out into the small and winding alleyways.

Saddam lived with his family in the countryside of Aleppo until their house was bombed. He saw people die in front of their doorstep.

“Shatila is safer,” he said. “But I still see people fight, and sometimes blood is spilled on the streets of the camp. I do not know why people fight, but it is scary.”

Mohammad disappears around a corner in the maze-like Shatila refugee camp, jumping over puddles and adeptly avoiding loose electricity cables.

“I still go to Bukra Ahla centre,” he said, referring to an informal education centre whose name translates to “Tomorrow is more beautiful”. The intermittent hours spent at the centre of the Soutien Belge Overseas, a Belgian non-governmental organisation, are his only taste of education: “That is when I rest from work.”

A shabby staircase, barely wide enough for the 12-year-old to walk up, leads to the apartment where his family lives.

The six of them share two rooms: a bedroom/living room and a kitchen/dining room. They live without a refrigerator or washing machine.

“I remember Syria was beautiful,” Mohammad said. “I wish we could go back, but only if the war ends and everything goes back as it was. If the school is rebuilt, I would go back.”

He and his family fled Syria a year ago after the local school was bombed. There was no future left for them in Aleppo.

“I get very scared when I think of war. What made me scared most is the sound of fighter jets. But now I feel safe,” Mohammad said.

A shy boy, Mohammad uses as few words possible to communicate. Before he speaks, he looks at his mother, his primary source of comfort and safety.

“He is very afraid of the thought of going back to Syria,” said his mother. “He is much better now, psychologically and emotionally. He is much calmer. But the work is making him very tired.”

Mohammad works in a shop that sells household products, earning $23 a week. His father is unemployed and money is scarce. With rent costing around $330 a month, the family had to ask Mohammad to start contributing.

“Work is okay,” he said, shrugging his shoulders in resignation. “The boss sometimes gets angry and yells at me, but only when I make a mistake.”

Mohammad says he does what is asked of him, but the mornings are hard; he wakes up thinking of his friends from back home, his old school, and the life he used to live.

“When I grow up, I want to be a pharmacist,” he said. “Just like my sister’s husband.”

But without any formal education, Mohammad’s dream will be nearly impossible to achieve. 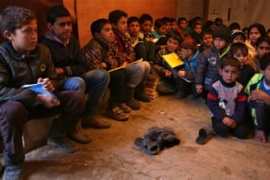 No easy answers for Syrian students in Lebanon

An estimated 250,000 Syrian refugee children in the country are not in formal schools, aid organisations say.