Tied to the wire mesh above the painted wall, a single poster shows a young man wearing a black suit, bow tie and graduation cap. Clean shaven and with a sash draped over his left shoulder, the young man looks straight ahead.

Taken in mid-July, the photograph shows Mohammed Sharaf on his 18th birthday at his high school graduation ceremony. His parents, Mahmoud and Nimeh Sharaf, set up a tent outside their home for Mohammed to celebrate with friends and relatives.

But a week after the festivities, Mohammed was killed during violent clashes between Palestinians and Israeli forces that spread throughout occupied East Jerusalem and the West Bank on July 21. Two other young men were killed the same afternoon.

The tent became a mourning space, where Mohammed’s parents greeted family members and friends who came to express their condolences. The graduation photograph was used on the “martyr posters” pasted to walls across the West Bank.

Nimeh described Mohammed as a popular, ambitious young man who studied hard and wanted to work in the medical field. “Mohammed was preparing to go to university in the autumn,” she told Al Jazeera. “He was trying to decide between studying medicine and nursing. His teacher was helping him to choose which university to attend.”

READ MORE: ‘They killed him because he was an Arab’

The Sharaf family usually attended Friday prayers at al-Aqsa Mosque, but on July 21, religious leaders in the city had ordered mosques closed and called for worshippers to pray in the streets near al-Aqsa, amid protests over Israel’s decision to install metal detectors and security cameras outside the entrances to the holy site. The move followed a deadly attack on July 14 that killed two Israeli policemen and the three attackers, all Palestinian citizens of Israel.

That day, Nimeh said, the family had gone to pray in the Ras al-Amud neighbourhood, but they were separated when clashes broke out between worshippers and Israeli forces.

“The clashes started straightaway after the prayer,” she said. “We were separated, so we all headed for home separately.”

Mahmoud said that he returned home and was preparing to rest when he received a phone call.

“A young man called me and said that my son was dead,” he told Al Jazeera. “He was taken to the medical centre and the young men took him from there to be buried immediately. We were not able to bring him home to say goodbye.”

The exact sequence of events that led to his death remains murky. According to the Palestinian health ministry, Mohammed died from gunshot wounds. Initial reports on local news sites stated that the teenager was shot by an Israeli settler, but after questioning a suspect, Israeli police did not lay charges.

“I don’t think there is any chance of justice,” Mahmoud said. “We know that if we want to claim justice, the Israelis will demand that he is removed from the ground to be examined. We do not want this.”

He blamed the Israeli decision to install new security measures around al-Aqsa for the deaths of all three men in Jerusalem that Friday, arguing that Palestinians had no choice but to boycott the measures and pray outside the compound.

“If al-Aqsa was open, we would have prayed inside and none of this would have happened,” Mahmoud said.

Like the Sharafs, the Abu Ghannem family feels a deep connection to the holy site. Their home in at-Tur, a Palestinian neighbourhood on the Mount of Olives in occupied East Jerusalem, is around a kilometre from al-Aqsa.

Mohammed Abu Ghannem had recently completed his second year of a computer science degree at Birzeit University. He had attended evening prayers on the streets outside of al-Aqsa with his mother, Suzan, the week before he was killed.

“In his final days, it was all he talked about,” Suzan told Al Jazeera. “He was very touched by what was happening at al-Aqsa.”

On July 21, Suzan went to pray in the streets of the Old City with thousands of other worshippers, while her son prayed outside the Old City in Wadi al-Joz. As she headed back home, she heard the sound of gunfire in her neighbourhood.

“I called my sister because she was closer to the area,” she said. “While I was talking to her, I heard the young men in the background saying that Mohammed had been killed. That is how I heard.”

Around the same time, Mohammed’s father, Hassan, also received a phone call from the young men who had taken him to a nearby hospital.

“I went straight to the hospital,” Hassan told Al Jazeera. “I saw him at the hospital and said goodbye. I gave the young men permission to bury him but then the soldiers tried to take him. I tried to prevent them, I ran to stop them, but I could not continue any more – I could not walk. The guys took him to the cemetery and buried him.”

Part of the incident was captured on video, showing a chaotic scene outside the hospital as young Palestinian men tried to lift a lifeless body over a wall in order to prevent it being confiscated by Israeli authorities. The footage was widely shared on local news and social media, heightening outrage among Palestinians.

“It was very, very hard to watch this video,” Suzan said. “You can’t imagine how hard it is to see his body being taken away like this. But it is still better than having the soldiers taking his body or his body being confiscated.”

Mohammed’s parents described their son as a popular young man – polite, funny and religious. The eldest of five children, his nickname in the neighbourhood was “the prince” because of his generosity. When his grandfather died last year, he began sleeping in his grandmother’s house because he did not want her to feel lonely.

Following Mohammed’s death, Hassan said that he was harassed by Israeli intelligence services, who warned him to stop speaking to the press about his son.

“I spoke to the media and said I was proud that my son was a martyr,” he said. “The intelligence called me and threatened me to stop saying things that I would regret later.”

On July 24, police arrived at the family home and detained Hassan, along with his cousin, Ismael. He said he was accused of encouraging young men to attack Israeli forces in East Jerusalem, which he denied. He was released later the same day without charge.

“It was very hard, not because of the interrogation,” he said. “It was hard because I had just lost a loved one, my son, my best friend.” 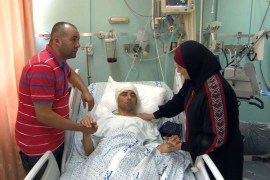 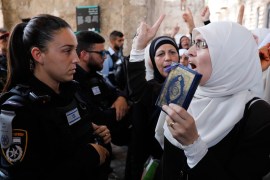 New Israeli measures of control will fuel the uprising in the occupied Palestinian territories, experts say.