Washington, DC – Last month, an interfaith group was barred from catching a flight to Israel from an airport near Washington, DC. At the Lufthansa check-in counter, the group of Jewish, Muslim and Christian delegates were told that Israeli authorities had instructed the airline not to allow them to fly to Tel Aviv.

“We weren’t given any more information, we were given no documentation,” said Noah Habeeb, a 23-year-old student who was travelling with the group. “We were told that there’s nobody else we can speak to about it, that speaking to TSA [the Transportation Security Administration] or US security officials would be irrelevant because the decision was solely from the Israelis.”

It quickly emerged that Israeli authorities had blacklisted the group because of their support for BDS – the Boycott, Divestment and Sanctions movement – which works to pressure Israel into ending its occupation of Palestinian and Arab lands and to grant its own Palestinian citizens full rights.

The two women and three men who were banned are members of various activist groups that support BDS: Jewish Voice for Peace, Presbyterian Peace Fellowship and American Muslims for Palestine.

“We were prepared for interrogation at Ben Gurion – I was. I’m Arab and Jewish, all of us who have Arab heritage in any way were expecting that, but not in this way. This is new,” Habeeb told Al Jazeera.

OPINION: The legal ways you can counter the anti-BDS campaign

Israel has regularly banned foreigners, including Jews, from entry for their activism or political views, but in March, it formalised its policy and began enforcing the ban more forcefully. Israel’s parliament passed an amendment into law denying entry to foreigners who express public support for boycotting the country or its settlements in the West Bank.

“It appears that this is a new front in the war against Israel for which the state was so far reluctant to prepare,” the amendment to the state entry law read. “This amendment aims to prevent people or representatives of companies, associations or organisations who publicly call to boycott Israel from actively working within state territories to promote their agenda.”

Interior Minister Arye Dery and Strategic Affairs Minister Gilad Erdan acknowledged in a statement that the group was barred from coming to Israel under the provisions of this new law, and Ministry of Foreign Affairs spokesman Emmanuel Nahshon said authorities have the right to deny entry to those it deems a threat to its security.

“Every country has the right to say that certain people who work actively against it are not welcome,” Nahshon told Al Jazeera. “The same applies to the US or to any other country in the world. There is no reason whatsoever why we should allow people whose main purpose in life is the destruction of Israel to travel [here].”

A related bill is also being advanced at the Knesset. If passed, it would ensure that the government’s pushback against BDS is shrouded in secrecy. Heading the fight against BDS, the Ministry of Strategic Affairs wants its efforts to combat attempts to “delegitimise Israel” exempt from the country’s Freedom of Information Law, which permits citizens to seek information from a public authority.

Erdan said the bill, which already passed a first reading, was necessary. “Since this is a battlefront like any other, the ministry put together a strategy for running the campaign against this phenomenon,” he said on July 18.

Since its inception in 2005, BDS has gained significant momentum, most notably in the cultural, religious and educational arenas. But despite its success in persuading some unions and banks in Europe and elsewhere to divest from companies that violate Palestinian rights, the movement has not made a significant dent in Israel’s economy.

READ MORE: Why BDS supporters in British universities fear they are being silenced

Nonetheless, BDS’ actions have left Israel increasingly concerned about its image abroad, as the movement’s support base continues to grow in the US and Canada, as well. In 2016, the Knesset even held a conference to discuss various methods to tackle BDS, and allotted 100 million shekels (around $28m) to that cause.

US bills to counter BDS

Israel’s efforts to combat BDS have meanwhile grown beyond its borders. In recent years, a slew of bills banning the boycott of Israel or its settlements have come to the fore in the US Congress and state legislatures.

“Over the past two years, we’ve seen a proliferation of legislation at the state and federal level,” said Lara Friedman, president of the Washington, DC-based Foundation for Middle East Peace.

“The immediate catalyst for this legislation – and the actual focus of its impact – isn’t the BDS movement, but increased efforts in the international community, and particularly by the EU, to differentiate between Israel and settlements.”

The Foundation for Middle East Peace has documented at least 28 bills introduced since 2015, targeting Israel boycotts and including in its definition of Israel its settlements in the West Bank. Critics say these anti-BDS bills are problematic because they conflate Israel with its illegal settlements, and stifle free speech.

“What we have are efforts to protect and normalise settlements, cloaked as efforts to fight BDS,” Friedman told Al Jazeera. “[This] leads us to the broader free speech issue: much of this legislation is brazenly unconstitutional, seeking to exploit concern about BDS to undermine the constitutionally protected right to speak out and engage in activism based on one’s political beliefs.”

These bills can be broken down into four major strands, according to Friedman. The first is at the state level, and it seeks to bar companies and individuals that boycott either Israel or settlements from winning state contracts.

The second, also at the state level, seeks to have states divest from companies that boycott settlements or Israel, and a third, which has popped up at both the federal and state levels, seeks to exploit a very broad definition of anti-Semitism to effectively shut down both BDS and criticism of Israel on university campuses.

The fourth is a bill currently advancing in Congress: the Israel Anti-Boycott Act would impose huge sanctions – fines of up to $1m and 20 years in prison – on those supporting or advocating boycotts of Israel, including its settlements, advocated by international organisations like the EU or UN.

“Backers of this legislation insist it is necessary to push back against EU- and UN-backed boycotts of Israel, despite the fact that not a single European country, nor the UN, calls for boycotting Israel,” Friedman said.

READ MORE: The history of the BDS movement

As outrage grew over the proposed measure, with groups like the ACLU asserting its unconstitutionality, some members of Congress have said they are now open to amending or at least reviewing the legislation. In a surprising move, one of the original co-sponsors of the bill has even withdrawn her support for the legislation.

“They’re now realising how draconian [this bill] is,” said Rahul Saksena, a lawyer at Palestine Legal, a group that supports pro-Palestine civil rights activists. “It is fundamentally ridiculous that our lawmakers from both major political parties are supporting a bill that questions First Amendment-protected activism.”

Saksena believes that amending the law is not enough to offset the chilling effect it will have on free speech and grassroots activism, on Palestine specifically.

“I’m concerned that with an overzealous presidential administration, pressured perhaps by Israel advocacy groups – including the ones that support this bill – if it’s enacted, it will be viewed as yet another tool to crush Palestine advocacy.” 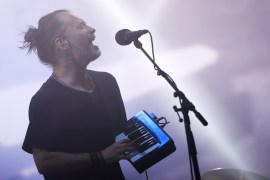 Cultural boycott of Israel, not dialogue, is needed. We had dialogue for decades and that did not bring any justice.