The new measures of control implemented by Israeli forces in Jerusalem’s Old City after a deadly gun battle will only lead to more attacks and an escalation in violence, analysts say.

The installation of metal detectors and turnstiles at the entrance to al-Aqsa Mosque compound, the site of the attack, has enraged Palestinians, who believe the new measures are an attempt by Israel to change the status quo at the holy site.

For a week, Palestinians have refused to enter the compound through the detectors and have resorted to praying on the streets. Over the weekend, Israeli forces responded to their protest with assaults and beatings. After Friday prayers, three Palestinians were killed and hundreds injured, further aggravating the heightened tensions.

The July 14 attack that killed two Israeli policemen, carried out by three Palestinian citizens of Israel who were shot dead, came in the context of what has been termed the “Jerusalem Intifada (uprising)”, which began in October 2015.

Since the uprising began, some 285 Palestinians have died in alleged attacks, protests and raids. Simultaneously, 47 Israelis have been killed by Palestinians in car-ramming and knife attacks.

But the new measures at al-Aqsa, taken by Israel to confront such attacks – which are widely seen by Palestinians as legitimate armed resistance to the 50-year occupation – are expected to only feed the cycle of violence, according to those on the ground.

“Israel is restricting freedom of movement through security checks for all Palestinians as a punishment for the action of some individuals,” Zakaria Odeh, director of the Civic Coalition for Palestinian Rights in Jerusalem, told Al Jazeera.

“We believe that this action by the Israeli government will lead to more violence rather than stability. It will increase the protest and resistance of the Palestinians to the Israeli occupation.”

READ MORE: Who are the guardians of al-Aqsa?

Over the past two years, Israel managed to curb the wave of attacks against its forces in the occupied Palestinian territories by increasing its nightly raids of Palestinian towns, embarking on mass arrests, and maximising the number of soldiers in occupied areas. But the perceived quiet has started to crumble with the crisis over al-Aqsa.

Since the metal detectors were installed last Sunday, Palestinians have carried out three alleged attacks against Israeli soldiers. Following Friday’s events, a Palestinian stabbed three Israelis to death at an illegal Israeli settlement in the West Bank.

Nisreen Alayan, a lawyer with the Association for Civil Rights in Israel – East Jerusalem, believes the new measures will only add fuel to the fire.

“Thousands of Palestinians come in from the West Bank during Ramadan and on Fridays, so the metal detectors will lead to more congestion and more tension and pressure on people,” Alayan told Al Jazeera.

“As we’ve seen in the past, these measures have only led to more attacks and deaths on both sides. In the history of Jerusalem, such measures have never calmed things down,” she added.

Jamal Zahalka, a member of the Israeli Knesset, agreed.

No one can rationally expect that the more than six million Palestinians who currently live in the occupied Palestinian territories will eternally endure dispossession, injustice, denial and humiliation without reacting to the violence they face.

“There is no way that tens of thousands of people will be able to enter through such detectors in reasonable time. So that people can enter, you will need long hours to enter – especially at times like Ramadan,” Zahalka told Al Jazeera. “Entry is already difficult through wide gates. So how do you think they would be able to coordinate passage through these detectors one by one?

“It is clear that what Israel is doing is causing popular anger among the Palestinian people in all the places they are present. And I think that this will continue to enrage Palestinians, whether or not that necessarily leads to more armed operations against the occupation,” Zahalka added.

On Wednesday, the Awqaf, the Islamic Authority in charge of the compound, warned that “the longer Israel delays the removal of the metal detectors, the worse it is going to get”.

Israeli authorities closed off the Old City, including al-Aqsa Mosque compound, for two days after the attack, barring anyone except those who lived there from entering. They also forced Palestinian shopkeepers to close their businesses, for the first time since 1969.

While Jordan retains control over the compound itself through the Islamic Waqf that administers the holy site, Israel imposes control on areas outside the compound through its occupation of East Jerusalem, where the Old City lies.

Israel already restricts Palestinian entry to the site through its separation wall, which cuts off the West Bank from Jerusalem. Of the three million Palestinians in the occupied West Bank, only those over a certain age limit are allowed access to Jerusalem on Fridays, while others must apply for a hard-to-obtain permit from Israeli authorities.

By adding the metal detectors, experts say Israel is further changing the status quo of the holy site and restricting freedom of worship. As an occupying power, Israel is forbidden from doing so under international law.

INFOGRAPHIC: Al-Aqsa and the Old City of Jerusalem

“It is much bigger than the issue of the electronic gates. Everything Israel is doing in East Jerusalem is a clear violation of international law,” said Khalil Shaheen, a Ramallah-based political analyst at the Masarat think-tank.

Under the 1947 United Nations partition plan for Palestine, Jerusalem was meant to be internationally controlled by the UN for its importance to the three monotheistic religions. But Israel claimed the holy city to be its “eternal, undivided capital” after it illegally annexed East Jerusalem in 1967 and extended its law there.

The illegal Israeli control of East Jerusalem, including the Old City, violates several principles under international law, which outlines that an occupying power does not have sovereignty in the territory it occupies.

“In those two days, Israel had full control over al-Haram al-Sharif; it had the keys to the mosque, and now it is taking control over the entry of Palestinians into the site. It is violating the freedom to worship,” Shaheen said.

Yara Jalajel, a former legal adviser to the Palestinian minister of foreign affairs, called the new measures of control discriminatory.

“The measure also limits the exercise of many human rights such as freedom of movement, and access to a place of worship. In consequence, it is safe to conclude that placing these electronic detectors on the entrance of al-Haram al-Sharif entrances is unlawful,” Jalajel said.

The issue of al-Aqsa Mosque compound and Israeli control over it is a red line for Palestinians, as was recently reaffirmed by Palestinian religious leaders – which means that an escalation in violence is not unlikely.

“The issue of al-Haram al-Sharif stands as a symbolic, but very strong catalyser of the routine of injustice and oppression that Palestinians in Jerusalem are facing, and that causes a continuous eruption of popular anger and uprisings,” Jalajel said.

“No one can rationally expect that the more than six million Palestinians who currently live in the occupied Palestinian territories will eternally endure dispossession, injustice, denial and humiliation without reacting to the violence they face.” 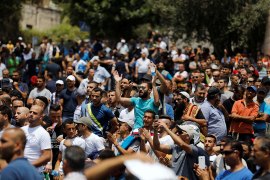 At least three Palestinians killed and over a hundred protesters injured in clashes over the al-Aqsa Mosque controversy. 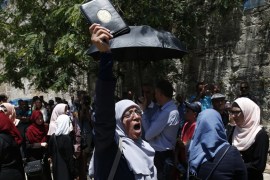 What triggered the violence at al-Aqsa Mosque?

Israel gradually reopens the holy site compound, closed for the first time in 48 years after a gun attack.