New York, US – It was an ordinary afternoon when Anthonia Iheme left her work at a nursing home in Hennepin County, Minnesota, and got into her car. But as she was about to pull out of the car park, she was shot – twice. Her vehicle lurched forward and clipped the side of a parked van before going over a pavement, down a small hill and striking a chain-link fence bordering the nursing facility. The gunman followed. He approached the driver’s window and fired several more shots.

The attacker was Anthonia’s husband. It was July 24, 2008. After murdering his wife, he called 911 and declared: “I have killed the woman that messed my life up … a woman that destroyed me.”

Years later, Grace Ogiehor-Enoma sat quietly on the J train heading to her office in the New York borough of Brooklyn. When the train emerged above ground, her phone rang. The caller had hidden his ID.

“Tell me why I should not kill my wife now,” he raged.

Although she receives similar calls 10 to 15 times a year, they never cease to startle Ogiehor-Enoma. The man, calling from the state of Georgia, launched into a tirade against Nigerian nurses in the United States.

“Some of the women, they deserve what they get,” he said. Ogiehor-Enoma let him vent.

After 10 Nigerian women – eight of them nurses – had been killed in the US by their partners between 2006 and 2008 – shot, stabbed or bludgeoned to death – Ogiehor-Enoma decided to act.

The nurse and executive director of the National Association of Nigerian Nurses in North America (NANNNA) started handing out her mobile phone number at community gatherings and events. It became an unofficial, de facto hotline for Nigerian men abusing or contemplating killing their partners, for couples seeking help, and for abused women.

The unofficial hotline was part of her organisation’s efforts to understand and tackle domestic violence among Nigerians in the US. Why was there so much violence against nurses? What should be done?

The National Network to End Domestic Violence reports that three women are killed every day in the US by their partners. According to the Bureau of Justice Statistics (BJS), black women in the US have historically experienced intimate partner violence at rates higher than white women.

These numbers, however, fail to account for the plurality of experiences within the African-American community. The BJS’ National Crime Victimization Survey did not track domestic-related murders and murder-suicides by perpetrators with an immigrant status until July 2016.

NANNNA wanted to determine the specific factors driving violence in the Nigerian diaspora. In 2011, they conducted an informal investigation into the murders of Nigerian nurses, gathered anecdotal data by reviewing comments on Nigerian news sites and blogs, hosted focus groups and used knowledge gleaned from the hotline.

Their findings revealed a recurring theme for Nigerian women in the US. They earned more than their partners and worked long hours, which kept them from what their partners perceived to be their domestic duties and led to suspicions of infidelity.

It also revealed a clash between a particular strain of patriarchy – as embodied by the Nigerian man accustomed to the norms of his male-dominated homeland – and feminism, as represented by the acculturated Nigerian woman.

Women were accused of “losing their identity” in the US and being corrupted by its “women-friendly” legal system.

NANNNA is currently collaborating with two psychiatrists at Yale University, Theddeus Iheanacho and Charles Dike, to formally research domestic violence against nurses in the US and Nigeria. Based on news reports of fatal domestic violence cases, Iheanacho estimates that on average in the past decade about three to four Nigerian nurses are killed by their intimate partners every year.

“In Nigeria, the balance of power, most of the time, is in the man’s hands, so he has less recourse to violence,” says Iheanacho. “Domestic violence is acceptable in Nigeria.”

Nearly a third of all women in Nigeria, 28 percent, have experienced physical violence. Nigeria has disparate pieces of legislation. A few states have passed legislation on domestic violence, but others permit husbands to physically “correct” their wives. Nigeria signed the Violence Against Persons (Prohibition) Act into law only in 2015, after a decade-long legislative process. The bill finally tagged spousal battery as “an offence”.

“[But] there is no enforcement of laws around domestic violence in Nigeria,” says Iheanacho.

Sometimes the abuse can escalate to extreme violence because women often stay in abusive relationships and refuse to take advantage of the different sources of aid available to them in the US. They believe as Ogiehor-Enoma puts it, “that as Nigerian women you have to be married to gain the respect of the community”.

One of the reasons nurses are targeted is because it is a common profession for Nigerian women in the US.

Based on data from the Migration Policy Institute as of 2015, Nigeria was the third source country for foreign-born registered nurses in the US. The field is relatively easy to get into; one can become a certified nursing assistant, picking up extra shifts and working for $12.78 an hour, in a matter of weeks.

“Nigerian nurses [also] marry Nigerian-American men as tickets/passports to higher income and better quality of life,” states the NANNNA study, which also revealed that some Nigerian-American men often return to Nigeria to marry nurses or women they later convince to adopt the profession.

After bringing their female partners to the US and or funding their nursing education, some of the men feel entitled to their partners’ salaries and insist on controlling their income. Once the women start to work, the men expect a return on their investment, says Ogiehor-Enoma – but in the US they often find it harder than anticipated to control their partners.

“Decisions about how money is spent are a source of conflict. The women were blamed for rebelling against this expectation and sometimes flaunting their superior contribution to their peril,” says the NANNNA study.

It is not just the prevalence of the nursing occupation in the community that accounts for why most of the victims of fatal domestic violence cases are nurses. For Iheanacho, the murders of nurses are almost symbolic.

“Nurses are just representative of a professional woman,” he says. “A nurse from Nigeria represents a successful professional, potentially independent, woman.”

Ogiehor-Enoma receives calls from irate husbands, complaining that now their women are nurses they no longer feel respected by them.

Her hotline has deepened understanding into the issue, and it is also filling a void – offering help to a community that is often not reached.

Official marriage counselling or involving the authorities in marital disputes is not common in the Nigerian community “because back home we tend to focus on elders; reporting the woman or the husband to the mother-in-law or to the family member to discuss the issues,” Ogiehor-Enoma says.

Community members, like most immigrants, are often unwilling to seek help from official sources of aid for fear of the authorities and of betraying their own group.

Research findings suggest West African immigrants are more likely to turn to informal avenues such as religious leaders, friends and relatives for help with domestic violence than the authorities, psychologists or marriage counsellors.

The advice and counselling Ogiehor-Enoma dispenses draws on her medical training, her Nigerian background and common sense.

When she receives calls from men, she refers them to local NANNNA leaders in their state; and she directs abused women to the National Domestic Violence Hotline. The calls are confidential and are often from nurses and their partners. But it is difficult to get these men and women to trust and use resources outside the community.

After the 2011 research, NANNNA presented its findings to the Ministry of Health in Nigeria and created domestic violence groups in their 13 chapters across the US.

Ogiehor-Enoma faces a lack of resources to create an official hotline with designated responders other than her as well as the culture of silence around domestic violence that prevents more people from using existing services to openly discuss intimate partner abuse.

More research, services and programmes tailored to the cultural needs of the community are needed to effectively monitor and curb domestic violence, she says. This would involve collaborating with diaspora groups and religious centres such as churches and mosques.

There have been no fatal cases since the death of Nigerian-American nurse Nnenna Laura Ogbonna-Onwumelu in Baltimore, Maryland on February 16, 2016.

The calls to Ogiehor-Enoma’s hotline are decreasing, and she isn’t certain why, but she attributes it partly to a lack of awareness and people’s unwillingness to discuss domestic violence. Perhaps opening a direct line to her community has also helped with curbing domestic violence, but without the data, it’s hard to tell.

Ogiehor-Enoma, like Iheanacho, believes the murders are just the tip of the iceberg, as the abuse endures and remains normalised below the surface. For their study, Iheanacho and Dike screened 100 Nigerian nurses in the US and Nigeria, and while their final findings will be reported in November, Iheanacho says the majority of the women screened positive for intimate partner violence.

As much as the Nigerian diaspora tries to save face and tackle its issues internally, Ogiehor-Enoma admits their aims cannot be met alone. More external assistance and resources are needed for community-run programmes; particularly programmes targeting men. “Our community needs help,” she says. 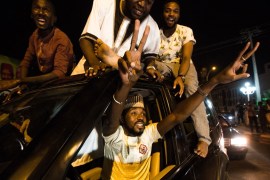 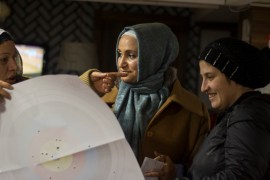