As the war in Syria enters its seventh year, the uprising that began in 2011 and the subsequent armed opposition that surfaced has slowly withered away, with many towns and villages reaching agreements with the Syrian government to give up the areas they were fighting for.

While the city of Damascus has remained under government control throughout the war, residents of the suburb of Jobar took up arms to fight Syrian President Bashar al-Assad‘s forces.

The besieged town has built a vast system of underground tunnels that have served as a lifeline for civilians and fighters. They have managed to continue their daily lives, building schools in shelters and passages to nearby towns for food and other basic supplies.

For several months a group of filmmakers, led by exiled Syrian director Maher Jamous, have been living and working amid Jobarians to document their struggle and to find out why they are so determined not to give way.

Al Jazeera spoke to Maher Jamous about the making of the documentary and the battle for Jobar.

Al Jazeera: Why did you choose Jobar to focus on? What is special about Jobar?

Jamous: What happened in Jobar took place in many other Syrian towns. Every day that the Syrian crisis developed, we saw more and more foreign intervention. Without a doubt, most of the towns and villages that surrounded Damascus saw the townspeople themselves take up arms. In Jobar specifically, there are no foreign fighters – it’s the people of the town who are fighting.

There were a set of evacuation agreements with the Syrian government and we saw the towns fall to government control, one after the other.

The only difference was that most of these towns, almost all, reached a point where they could not sustain themselves and continue with the sieges being imposed on them by government forces.

To save civilians, opposition fighters struck agreements with the government and fighters were expelled from many towns.

But Jobar continues to resist. Jobar, until today, is persevering. The families maintain that they will not give up or bow down. They say “we will triumph or die”.

What made Jobar different as well is that it is in the heart of Damascus, which is one of the main reasons why I chose Jobar. It means that the regime – despite all its claims – is not in complete control of the capital.

Al Jazeera: Can you tell us about the making of the film? How did you get the equipment into Jobar?

Jamous: I got in touch with some of the people I knew in Jobar. Most of them were very active during the uprising, taking pictures and videos and publishing them online.

After speaking with them about life in Jobar, I found that it really deserved being highlighted. So we began to collect information about people in the neighbourhood. They would send me profiles of different people and their stories.

We began working online and developing our ability to communicate. We sent them internet routers and other equipment to ensure they would have internet access and could send us the material.

At the same time, we were sending them equipment to film: cameras, a stabiliser, etc.

This is a bit of a sensitive issue, but there is no doubt we smuggled the equipment in through tunnels. At the end, it got to Damascus and from there to Jobar. The equipment was delivered in five rounds – we weren’t able to get the last set of equipment, which was lighting equipment, through. So we worked without any lighting.

Al Jazeera: Did you contact the Syrian government to be able to get the equipment in?

Jamous: Well, the smuggler is responsible for getting through checkpoints and so on. I’m sure there were some kind of bribes involved.

Al Jazeera: In the film, you show the system of tunnels built by the people of Jobar. Can you tell us more?

Jamous: Due to the amount of tunnels in Jobar, there is a life above and under the ground. There are kilometres of tunnels, which were dug up with very basic tools. Some are 10 metres deep.

These tunnels have specific points where a fighter is stationed between one building and another.

The people try to not show any movements above the ground when there is shelling. They’ve built the tunnels so that they’re able to live their lives normally without needing to be above ground and that the shelling doesn’t eradicate their ability to move freely.

They have one main tunnel which they use to transfer the wounded and which the ambulance uses, from the medical centres.

There are also tunnels connecting Jobar with other areas such as Ghouta. Usually, food supplies and other essentials come from Ghouta.

The government knows that there are tunnels, it’s not a secret. Sometimes they take measures, such as opening the sewage and flooding some of the tunnels.

Al Jazeera: What was the biggest challenge you faced making this film?

Jamous: The biggest challenge was trying to convince the people in Jobar that we’re doing something that would be useful.

Firstly, that we would be revealing to the outside world the level of atrocities and crimes committed by the Syrian government while also showing the people’s resistance and their dignity in fighting for their town.

And secondly, convincing them that making this film will not do them harm – that they could trust us.

Another important aspect was ensuring that we would be able to film in the tunnels. When we were able to get approval for filming in the tunnels, which took a while, I felt that we were going to get great and powerful material.

The bombardment and the war forced us to delay our filming on many occasions, and to be honest, I was very worried about the safety of the people I was working with. There were fighters and civilians who were killed after we filmed them.

You cannot make such a film in this period of time without being confronted with the reality of death. One of the personalities in the film is the graveyard keeper. He has buried some 20 people from his family alone.

Death is a central part of their daily lives.

Al Jazeera: Are you concerned that you are putting people’s lives in danger, especially with showing the tunnels and their sources of livelihood?

Jamous: We had agreements with them about where we could film and not. It’s underground so it’s not really clear. All the people in the film know that they are under the threat of being killed at any second – whether they are shown in a film or not.

We also changed some of the names of people who have relatives in Syria and outside.

Al Jazeera: What is the message of the film?

Jamous: There is a nice scene in the film; there are kids in Jobar, studying in schools and getting on with their lives. They organised a little event in the school one day and put out a message that they wanted the world to hear. I believe that the message of these kids is the message of the film.

This is the message of the film. Syrians are being killed and Syria is being destroyed. The claim of terrorism was created to prolong the life of the Assad regime. Our message is to reveal the truth about what is happening in Syria. 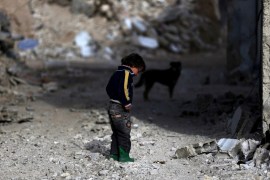 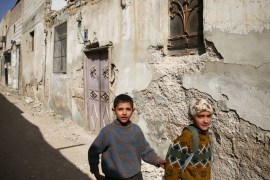 ‘Starvation around the corner’ if humanitarian aid is not allowed into besieged areas in the capital, UN officials say.