It is Ramadan and the minarets are silent. The call to prayers have been replaced by the sounds of artillery bombs.

My back hurts from the flak jacket, so I sit and lean on a wall.

Everything is pitch-black from where I sit at the checkpoint, but I can still feel the movements of police, their sadness and exhaustion cutting through the dark.

It’s the eighth day of the siege, and the strain is showing on everyone.

This is Marawi City in a time of war, a place where lines once clearly defined are now often blurred.

A police officer comes up to me and asks if I have medicines because his colleague is running high with fever.

“Of course,” I say as I hand over some paracetamol.

Aerial bombardments are relentless, even in the dead of night. It no longer bothers me. I take out my notebook and I start writing, slowly at first.

But in the distance, I can hear the desperate howling of stray dogs. Their cries are unlike anything I have heard before. It sends me into a panic. There are dead bodies in the city yet to be retrieved.

We can all smell death.

I close my notebook and ask our team to leave our position immediately.

The government claims members of the Maute group have been cornered, but very few government officials admit that a military solution is enough.

Weeks before it happened, talks of an impending attack by terrorist groups was rife but the intelligence information coming in was sparse. Now, more than a month since the siege started, the whole situation is starting to look like a colossal blunder.

As the war continues, how does one even quantify loss from both sides? How does one measure security, let alone victory?

Perhaps these can only be weighed by the seemingly insurmountable amount of grief around us.

So much blood has been spilled in this city, and Marawi has turned desolate.

READ MORE: Rodrigo Duterte – One year on, as popular as ever

In the more than ten years that I have been covering Mindanao, I have learned how to identify an artillery strike from a grenade based on how they drop. I have also learned that if a bullet whizzes past me, it is a close call.

These days I am learning that the war in Marawi is unlike any other. Even a military officer admits the destruction in Marawi is worse than the burning of Jolo in 1974, during the time of martial law under the Marcos regime, when thousands of Moros perished.

I fear it may just be the start of another vicious cycle of violence.

Now, more than 30 years since the Marcos regime ended, this is how martial law begins.

In a little over a month, thousands of voiceless bakwits – men, women and children, young and old – cramp themselves in evacuation centres where they endure heat, despair, and persecution.

This is martial law, where ordinary civilians risk their lives to rescue those who remain trapped in the midst of fighting in the city.

Unlike top police officials who go around for photo ops in bulletproof gear, these volunteer rescuers venture into the city wearing white, plastic helmets and vests made of cloth, with prayers clutched in their hearts as their only protection.

This is martial law, where the state uniform means command in the midst of criticism, injury, and death, and where the cost on the military piles high as generals call on soldiers to pay the ultimate price.

The best of the military hardware is here. Thousands of soldiers have been deployed and air strikes have been relentless, with the police force also at the military’s disposal.

And yet the leadership of the military can’t even commit themselves to saying when this will be over.

Another day, another deployment

Wildflowers stained with blood, a fading Arabic inscription on a wall, a broken shoe, a dead animal. This place is an image of destruction and death.

We drive near the besieged areas of Marawi and it is a city scarred, that much is clear. This place is a pile of rubble and steel; the streets are empty, and it is dirty and hot in here.

And yet, the worst is yet to come.

Lives were interrupted, and what is left of the city is far from comforting. One of these days, the military operations will stop, air strikes will cease, and the sound of fighting will be replaced by the sound of prayer as the people return to their city – a sound that will linger as the people continue their struggle towards peace and healing.

For the people of Marawi, this war means nothing but a lifetime of grief. 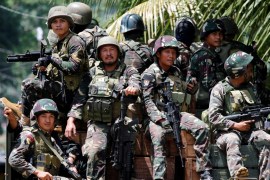