The appointment came shortly after Morsi, a Muslim Brotherhood member, relieved several senior military leaders of their duties. The move was intended to promote a younger generation of army generals, closer to the idea of democratic transition and the notions promoted by the January 2011 popular uprising that ended President Hosni Mubarak‘s 30-year rule.

At the time of his appointment, Sisi was known as a long-time military officer and the former head of military intelligence. A year later, on July 3, 2013, Sisi led a military coup that removed Morsi, following mass protests over a worsening economic and human rights climate.

Since the toppling of Morsi, Sisi became increasingly known as the “people’s saviour”. He won the 2014 presidential election with 97 percent of the vote, according to the state’s election commission.

A Human Rights Watch report on Cairo’s notorious Scorpion Prison revealed that most of the inmates were political prisoners, and that they “suffered abuses at the hands of Interior Ministry officers, including beatings, force-feedings, deprivation of contact with relatives and lawyers, and interference in medical care”.

Extrajudicial killings rose from 326 in 2015 to 754 in the first half of 2016, according to al-Nadeem Centre, an Egypt-based human rights group that works with victims of torture.

In August 2016, the Egyptian Coordination of Rights and Freedoms released a report on prison conditions in Egypt under Sisi’s rule, documenting 1,344 incidents of torture and intentional medical neglect in detention facilities and prisons between 2015 and 2016.

In 2014, Sisi issued a decree that granted the military wider jurisdiction, allowing the armed forces to prosecute civilians in military courts. These trials often lack evidence and are solely based on investigations led by national security officers. According to Human Rights Watch, the law has “formed the basis of 7,400 or more military trials of civilians” to date.

There are also reports of forced disappearances, with Amnesty International recording three to four disappearances a day between 2015 and 2016. The rights group acknowledged that the number could be much higher, since numerous families fear repercussions for reporting a disappearance.

In 2016, Egypt’s supreme court upheld a 2013 law that effectively banned any public gathering of more than 10 people, sentencing offenders to up to five years in prison. Another law ratified by Sisi ordered the creation of a Supreme Council for the Administration of the Media, a body that has the authority to revoke media licences and fine or suspend publications and broadcasters – a move criticised as a blow to press freedom in the country.

In June 2017, 64 news websites that were not aligned to the state media’s narrative were blocked before the 2018 presidential elections.

Egypt also remains under a state of emergency, which was declared in April after deadly church attacks killed nearly 50 people. The state of emergency grants the president powers to censor, monitor or halt forms of communication.

Under Sisi, public space has continued to shrink, with civil society becoming further repressed. In 2016, the Egyptian parliament passed a law that heavily regulates the operations of more than 47,000 non-governmental organisations and charities across the country, making them subject to a governmental supervisory body.

Prior to the ratification of the law, which Sisi signed in May 2017, several organisations – including al-Nadeem Centre – were forcibly shut down as part of what analysts describe as a widening crackdown on civil society and dissent.

Egypt’s economic conditions have also declined under Sisi’s rule. Political instability and regional insecurity have damaged tourism in the country, which never fully recovered from the 2008 global economic crisis.

As a result, Egypt devalued its currency by 48 percent, which – along with strict government price caps – made scores of medical products unprofitable to produce or import.

In Egypt, 28 percent of the population lives under the poverty line, and unemployment rates reached 13 percent in 2016. In May 2017, Egypt’s inflation increased to 30 percent, the highest in the past three decades.

In 2016, the government agreed to transfer control of two strategic Red Sea islands – Tiran and Sanafir – to Saudi Arabia, sparking outrage and public protests. Although a lower court had previously ruled against the deal, Egypt’s top court later nullified that verdict.

Hundreds demonstrated against the move in the streets of Cairo in the first mass protests under Sisi. A total of 71 protesters were arrested and sentenced to two years of imprisonment.

Dozens more were arrested in June 2017, as police cracked down on a second demonstration. Journalists and activists criticised the deal while it was being debated in parliament, accusing Sisi of selling land in return for Saudi aid. The deal was ultimately passed.

With Sisi widely expected to run for a second term, the government has increasingly silenced opposition candidates. In May 2017, ex-presidential candidate and opposition leader Khaled Ali was arrested pending investigations.

Ali, a human rights lawyer who had suggested he may run for president in 2018, was the main lawyer behind bringing a case against the government for agreeing to sign the Tiran and Sanafir deal.

Egypt is also gripped by conflict in the Sinai Peninsula – a volatile desert region split into two governorates, north and south, which has been a hotbed for various armed groups.

Fighters based in the Sinai who are affiliated with the Islamic State of Iraq and the Levant group (ISIL, also known as ISIS) vowed earlier this year to increase attacks against Egypt’s Coptic Christian minority.

The country has seen a string of attacks in the past year alone against the Coptic minority and its police and military personnel.

In an attempt to stifle attacks, Sisi announced that a “counterterrorism” campaign would help to stabilise the country, but local rights activists say the government’s measures have proved to be largely ineffective. 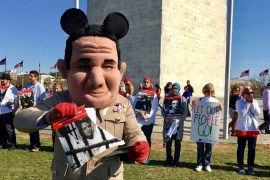 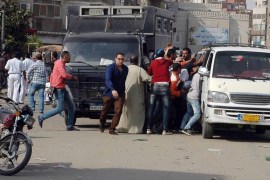 At least 130 people are arrested as rallies erupt across the country against poor economic conditions and rising costs. 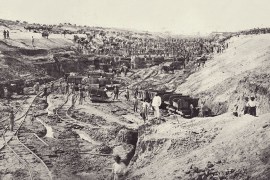 The history of the canal offers a cautionary legacy to those hoping to win Egypt a good place in international economy.