London, UK – On the surface, the scene inside Finsbury Park Mosque in North London is as it would be at mid-afternoon on any other day in Ramadan.

The British capital is in the midst of a heatwave and worshippers inside take siestas and play with their smartphones to whittle away the hours before their fasts end.

But this day isn’t like any other. Just an hour earlier both the British Prime Minister Theresa May and the leader of the opposition Labour Party, Jeremy Corbyn, were on the scene in a show of support for the local Muslim community.

The night before, as worshippers finished their taraweeh prayers, a man driving a rental van mounted the pavement and drove into a crowd of people leaving the Muslim Welfare House, which is a two-minute walk from Finsbury Park Mosque.

.@EmilyThornberry, @DavidLammy and I spoke with Finsbury Park Mosque's congregation about how we'll get through this difficult time together pic.twitter.com/Yf5aMF9ZcV

At least one person at the scene died, three others were critically injured and several more suffered non-life-threatening wounds.

The suspect, named as Darren Osborne from Cardiff, is alleged by those present to have declared his intent to “kill all Muslims”.

He was saved from being beaten by survivors only by the intervention of an imam and local youths, who protected him until the police arrived.

Images later emerged of the suspect sporting two black eyes while being held upright by officers.

Police are treating the attack as a potential terrorist incident and politicians from all sides have responded accordingly.

May called it an “attack on British values” and Corbyn, who is also the local MP, described it as “horrific and cruel”.

Outside Finsbury Park Mosque, the scene is one of frenzy as TV crews set up for live broadcasts, photographers hustle for the best vantage spots, and reporters pursue local people for interviews.

Londoners, with fresh memories of the Grenfell Tower disaster last week and the recent London Bridge and Westminster attacks, arrive to pay respects and lay flowers at the mosque’s walls.

The gestures of solidarity are welcomed by local Muslims but also present is a sense that the attack was the culmination of years of hardening sentiment against the community.

Fatima, a student and regular worshipper at the mosque, tells Al Jazeera that the area has experienced Islamophobic violence before.

“In 2015 Finsbury Park Mosque had an arson attack against it and someone tried to throw a fire bomb to the women’s section,” she says, adding: “There’s actually a metal roof now installed over the women’s section to protect that.”

For Fatima, it’s important that the condemnation by politicians is matched with political action to protect Muslims from further attacks.

“We have to come together and ensure that the government tackles far-right extremism and introduces legislation that specifically targets Islamophobic attacks and hate crime against Muslims in this country.”

Ali Habib, who lives a few minutes away from the scene of Monday morning’s attack, has also noted a sharp rise in Islamophobia in the past two years, which he says has been brought on by the growing confidence of the far-right and their thinly veiled calls for action against Muslims.

“You have the rise of the far-right, you have [Islamophobic] people on social media, you have columnists like Katie Hopkins writing things like “we need a final solution” and this [attack] has happened now,” he says.

Hopkins, a Daily Mail columnist, was sacked from her show on the London Broadcasting Company (LBC) for a tweet she made after the Manchester concert bombing, which evoked the Nazi euphemism for the extermination of the Jewish people or “final solution”.

The role the media plays in fomenting Islamophobic sentiment and providing a platform for anti-Muslim ideology is the subject of intense scrutiny on social media after the attack.

In one widely retweeted post, a user named Russell Simpson facetiously asks: “If only we knew how Darren Osborne was radicalised” over a collage of British tabloid front-page headlines about Muslims.

Among the headlines are frequent claims that Muslims are trying to enforce their own customs on the country, one story about Muslim schoolchildren attacking a “British” child, and one by the Daily Express that simply reads “Muslims tell British: Go to hell!”

If only we knew how Darren Osborne was radicalised… pic.twitter.com/PY43SAPRxQ

Miqdaad Versi, the assistant secretary general of the Muslim Council of Britain, says the problem is not limited to right-wing newspapers.

“Not only do you see it in the tabloid press, which you see a lot of, but also within mainstream organisations, mainstream broadcasters, spreading this hatred.”

He recalls a recent BBC appearance by the Spectator columnist Douglas Murray, in which he argued “less Islam” would help to counter terrorism.

Had a Muslim committed the same kind of atrocity, we would already have several dozen opinion pieces, commentaries and analyses, and the pundits would be talking about exactly how the attacker was radicalised

According to Tallha Abdulrazaq, a researcher at the University of Exeter’s Strategy and Security Institute, the entire Muslim community is subject to levels of scrutiny that are rarely applicable to other groups.

“Had a Muslim committed the same kind of atrocity, we would already have several dozen opinion pieces, commentaries and analyses, and the pundits would be talking about exactly how the attacker was radicalised,” he says referring to the Finsbury attack.

“That entire discourse is missing from the terrorism we saw at Finsbury Park, or even from the discussion over the terrorist murder of Jo Cox last year.”

For Abdulrazaq, violent acts committed by white perpetrators go through a process which detaches the act from political motivation.

That idea has some subscribers on social media.

The front page for The Times newspaper on Tuesday reads “Jobless ‘lone wolf’ held over attack on mosque” with a subheading that carries a claim by the suspect’s family that he suffered from mental health issues.

“This is definitely 100 [percent] how The Times would portray an Islamist terrorist attack,” wrote Guardian columnist Owen Jones, in a tweet responding to the front page. 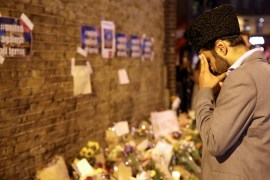 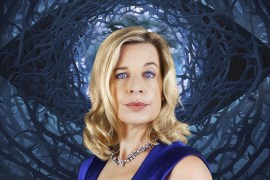 The far-right British columnist and her hate filled anti-Muslim rhetoric is the symptom of a more sinister problem.