Phnom Penh/ Takeo, Cambodia – When Soth Yun was a young woman, she spent years secretly in love, too frightened to reveal her feelings.

It was the 1970s, and Cambodia was under the control of the Khmer Rouge, a Maoist movement that imposed forced labour on Cambodians and deprived them of food and basic necessities, such as medicine. Anyone deemed an enemy of the government was executed.

People were also punished for having relationships that weren’t sanctioned by the government, which considered reproduction to be the sole purpose of sex.

Yun’s love was particularly subversive as it did not serve the government’s aim of increasing the population: she loved another woman.

Between 1975 and 1979, the years that the Khmer Rouge was in power, at least 1.7 million people died due to starvation, overwork or arbitrary killings. An estimated 13 to 30 percent of Cambodia’s population at the time perished under the Khmer Rouge.

The government separated families and segregated the population according to age and gender. People were considered tools for building a classless agrarian society.

It was these conditions that brought Yun and Houy Eang together.

“We were working in the same group digging an irrigation canal. She was sick and I helped her. She was nice to me,” says Yun, who is now 61, recalling how she and Eang met in 1973.

They were in Takeo province, one of the first areas to fall under the control of the Angkar, the government’s high command.

Yun never said anything about how she felt. Then Eang was transferred to another work unit, and the two women were separated.

“I was always waiting for her to come back,” Yun says. When Eang returned five years later, just before the Khmer Rouge was overthrown, Yun confessed her love.

Today, 44 years after they first met, they remain together. They live in Sdok Prey, a small village in Takeo province, two hours south of the Cambodian capital Phnom Penh.

Their story is not uncommon. Other women found love in the gender-segregated society imposed upon them. But surviving the Khmer Rouge while in a secret relationship wasn’t the only hurdle they had to face; many of the women who stayed together have been shunned by their families, friends and neighbours.

When asked how, despite the hardships, her relationship has endured, Yun reflects: “I think lesbian couples are more stable than other couples. And we have been through a lot of suffering. We stay together no matter what.”

Some of these older couples now support younger women and talk to their families about understanding their daughters’ sexual orientation.

“We know how tough it is and we want to help them to be accepted,” Yun says.

ALSO READ: The question of genocide and Cambodia’s Muslims

Secret love under the Khmer Rouge

A 2011 report from the NGO the Documentation Center of Cambodia titled “Cambodia’s Hidden Scars”, explores the enduring trauma inflicted by the Khmer Rouge on survivors and ensuing generations.

According to the report, the Khmer Rouge’s objective to “dismantle the traditional Cambodian family unit” was a “major assault” on relationships. During this period, children were uprooted from their families and sent to communal homes to “foster allegiance to the state rather than the family” and encouraged to denounce their parents, relatives and friends.

Unmarried men and women often lived in separate work groups, but mixed for specific tasks. The Angkar carefully controlled interactions between the opposite sexes and imposed forced marriages where partners were chosen arbitrarily in order to weaken family ties.

“In a society where sex was understood as penetration, women having a close relationship could be seen as less suspicious,” according to Theresa de Langis, an associate professor of Global Affairs at the American University of Phnom Penh. She leads the Cambodian Women’s Oral History Project which collects survival stories from the Khmer Rouge period.

“When I told a Khmer Rouge cadre that I was in love with a woman, he thought it was a joke,” recalls Noy Sitha, another woman who met her lifelong partner, Hong Saroeun, during this time.

“‘If you can make children, I will give you a position in the Angkar’, he said.”

He assumed their bond was comradeship – something encouraged by the Khmer Rouge. He even allowed her to request permission to live in the same house as Saroeun.

“He agreed because he thought we were just friends,” she says.

The women met in their working group in 1975.

“She was very funny and this is why I became interested in her,” says Sitha, who remembers that even the arduous task of digging a large canal couldn’t erase Saroeun’s smile.

“We were not living in the same house but I was sneaking in at night,” Sitha says.

Some of the cadres, as the low-level leaders often overseeing working groups were referred to, grew suspicious.

The group leader who first discovered their relationship tried to have them executed, based on code number six of the combatants’ 12 codes. This moral code prohibited the abuse of women, including rape, but many interpreted it as banning any kind of flirtation, sexual or love relationship outside a state-sanctioned marriage.

But the superior the group leader complained to was sceptical that Sitha and Saroeun were in a relationship, and the couple were spared punishment.

Under the Khmer Rouge, women, who had traditionally remained at home or whose public activities were limited, were put to work alongside men.

“It was actually equality of suffering,” says de Langis, who explains that women suffered more as their identity was eroded by the disintegration of families.

“They [the Khmer Rouge] took out many of their reproductive roles, not only having babies but also raising and caring about other members of the family,” de Langis says.

Rape, prohibited under code number six, was widespread and often linked to forced marriages. The Extraordinary Chambers in the Courts of Cambodia (ECCC), the tribunal judging the crimes committed by the most senior leaders of the Khmer Rouge, is currently investigating this, among many other crimes. The case is now in its final stage and in mid-June the tribunal will hear the closing statements of the prosecutors, the defence teams and the civil parties’ lawyers before a sentence is handed down.

Forced marriages were sometimes a punishment meted out when code number six was violated.

“When they knew I was in love with Eang, they tried to force me to marry a man. I told them I would rather die,” Yun says. At the time, she hadn’t yet confessed her love to Eang but “they saw I was too nice to her”.

“I was lucky because at that moment the cadres changed,” Yun adds.

In some districts, women were allowed to refuse marriages, sometimes with the promise of working harder. But forced marriages were a common practice, and few could escape them once they were settled.

“People were not allowed to make any objection to the decision of the Angkar and a marriage order was no exception. Refusal to marry could have resulted in torture, imprisonment or death,” says a 2013 report on sexual violence during the Khmer Rouge period, written by Kasumi Nakagawa, an expert on gender issues at the Pannasastra University of Cambodia.

In a photo taken a few years after the fall of the Khmer Rouge, Sitha poses confidently with short hair and a yellow button-down shirt; Saroeun wears her long hair untied. Today, Sitha dresses in shirts and slacks; Saroeun always wears a sampot, the traditional Khmer skirt.

According to Srun Srorn, founder of Rainbow Community Kampuchea (RoCK), one of the first LGBT groups in the country, lesbians in Cambodia often adopt traditional Khmer gender roles.

Sitha not only dresses as a man but is also the main economic pillar of the household, thanks to her work at a public radio station, while Saroeun usually stays at home and takes care of the housework.

“Lesbians in Cambodia have their own identity, different from other countries,” Srorn says. “Even if they dress as women” – which couples do at times to conceal their relationship – “their roles are husband and wife,” he says.

The couple has struggled to be accepted by society. Sitha still hides her relationship from their neighbours.

“When we walk in the street, people talk about us and say: how can two women sleep together?” Sitha explains. When people ask her about their relationship, she tells them they are “just friends”.

“Lesbian relationships are particularly incomprehensible to Cambodian society, which can lead to situations where family members use dramatic means in an attempt to break-up same-sex relationships,” according to a 2010 report from the NGO the Cambodian Center for Human Rights, which documents cases of women whose families lock them up at home to stop them from seeing their partners, or force them to marry a man.

“Other LGBT groups also have problems with families, but it is increased in the case of lesbians, because they are women and, in Cambodia, women have more pressure than men,” says Chhoeurng Rachana, an LGBT rights activist at the organisation CamASEAN, a local NGO which combats discrimination against minority groups.

Women’s identities in Cambodian society have been traditionally codified in the Chbab Srey poem, which has been passed down for generations. The verses form a code of conduct, with instructions for women, which include staying at home to serve their husbands and families, Chhoeurng says.

Yun and Eang survived the Khmer Rouge, but their relationship came close to falling apart at the hands of their relatives.

First we were afraid of the Khmer Rouge. After that, of our families, Yun says.

When their families found out about their relationship, Eang’s locked her up, but she managed to escape and the two briefly eloped. But they returned a few weeks later when they ran out of money. It was only in 1984, when Eang’s father died, that she was able to openly move with Yun into their own home. When they did so, their older relatives stopped talking to them and today most still haven’t accepted their relationship.

Wider social acceptance, they say, has steadily increased thanks to the work of organisations like RoCK and CamASEAN, who have been advocating for LGBT rights over the past decade, visiting the families and neighbours of same-sex couples to talk to them about different sexual orientations.

“They have helped in making people in the village to accept us,” Yun says.

Both couples know that the strength of their relationships could help reassure the families of other younger lesbians. They visit these couples’ communities, talk to their relatives and friends and organise exhibitions, debates and concerts about LGBT issues.

“We don’t have to fight with our families anymore but young lesbians still face discrimination from their relatives that don’t accept them,” Yun says.

Sitha composes and performs songs at events to raise awareness about the discrimination that lesbian couples face in a society that loves singing and dancing.

“How difficult is our lesbian life? It is very painful. Nobody supports us and tears drop every day. Why am I different from people around?” Sitha asks in one of her songs.

Ironically, Sitha says, while their living conditions were harder during the rule of the Khmer Rouge, their love was for the most part easier. “Today, life goes by fast and we meet new people every day,” she says. “And many don’t like us.” 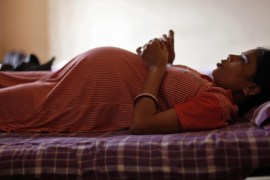 As India bans foreign surrogacy, clinics look towards Cambodia, but what will it mean for the rights of surrogates? 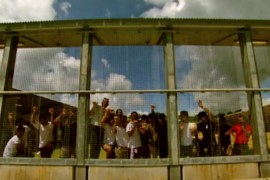 Outsourcing refugees: ‘How will I survive’ in Cambodia?

Why Australia’s controversial refugee resettlement deal with one of the world’s poorest countries is ‘a failure’.