One of the first things I noticed when walking into the modest home of the Cukurs, is a framed picture wrapped in a patterned brown cloth, prominently displayed next to a plaque emblazoned with Islamic calligraphy in the bare living room.

I soon discovered that behind the cloth, was the family’s greatest pride, and now greatest heartbreak – the last school portrait of their 17-year-old daughter, Rozerin.

Rozerin’s mother has been speaking with a psychologist to help cope with the grief and outrage following her death more than a year ago. The psychologist told her it was best for her not to look at the photo.

“I go crazy talking about my daughter. She is always in my heart,” says Fahriye Cukur. “They did not have the right to do this. They came and stole our child and cut out a piece of our lung. My daughter was not guilty.”

The tension is palpable in Diyarbakir. Hundreds of people such as Rozerin have been killed since a ceasefire disintegrated in July 2015 between the Kurdistan Workers’ Party or PKK, and the Turkish government.

The United Nations says that at least 355,000 people, mostly Kurds, have since been displaced, and numerous politicians, including the former co-mayors in Diyarbakir, have been imprisoned.

The PKK, designated a “terrorist” group by Turkey, the European Union  and the United States, launched an armed struggle against the Turkish state in 1984 for more autonomy. Since then, more than 40,000 people have been killed in the conflict.

A ceasefire between the PKK and the state broke down in July 2015 and thousands have been killed in the conflict since then.

“We were forced to take security measures and had to establish order. However, we have tried to respect human rights as much as we could,” says Abdurahman Kurt, deputy chairman with the ruling AKP party and a native of Diyarbakir.

He says the government tried to make peace with the PKK and was ready to pay the political price for doing so.

The Cukurs never imagined their studious daughter, a pacifist, would become a casualty of the same violence that drove the family out of their burned-out village a generation before.

“We have one reason [for her death],” says Fahriye Cukur. “Because we are Kurds. Because of one language. One name. They kill our children and then call them terrorists.”

The Cukurs say their daughter was a student in January 2016 when she was trapped by the violence in Diyarbakir as she tried to retrieve her notes at school and was shot by a Turkish army sniper.

It took the family five and a half months to retrieve her body so they could bury their child.

“I have been so distracted by my daughter’s death,” says her father Moustafa Cukur.

“It ended half of my life. I say to the [Turkish] state what do you want from me? You took everything from me. Now you should kill me or jail me.”

The family says it won’t stop speaking out about what they view as the injustice of Rozerin’s death. But that has risks. Moustafa Cukur says he is now under investigation for aiding and abetting the PKK and spreading propaganda. He says the only thing he is trying to spread is awareness about the plight of the Kurds. 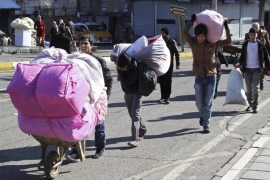 There is no better alternative to the peaceful settlement of the Kurdish issue.