Ongoing consultations between the UN-backed government in Tripoli, representatives of the interior ministers of Italy and other eight European countries aim at bolstering an agreement signed in February, when Libya agreed to tackle the smuggling of migrants into Europe.

On Monday, during talks with European officials in Rome, Libyan Prime Minister Fayez Serraj asked for 800m euros ($864m) in military, rescue and emergency equipment to curb illegal migration across its border into Europe. Serraj’s demands will also include 10 rescue ships, helicopters, ambulances, and motor vehicles, as well as satellite phones and diving equipment, for a total estimate of about $864m.

In 2016, more than 503,700 migrants entered the EU borders illegally, of whom some 364,000 crossed the Mediterranean Sea, according to figures published by the European agency, Frontex. The year of 2016 has become the deadliest on record with 5,096 deaths at sea recorded.

Frontex says that while migrants arriving from the Middle East and Asian countries via the Western Balkans route have sharply declined, while those taking the Central Mediterranean route are steadily increasing.

The EU has already committed about $216m to Libya in financial aid, but Monday’s meeting discussed ways to find additional financial resources to meet Tripoli’s demands. In February, Italy committed to provide military training for the local police forces.

The meeting’s primary objective aimed to create a permanent high-level contact group in charge of implementing a plan to control North Africa’s borders and stems the flow of migrants through the Central Mediterranean route into Europe.

The growing instability in Libya has become a matter of concern, especially for Italy, which bears most of the migrants and whose receptive infrastructure is on the verge of collapse. Since the beginning of 2017, some 20,000 migrants have been rescued out at sea by Italy’s coastguard.

On Sunday, 3,315 were rescued in one day of 25 different operations along the Italian coasts.

Italy and Greece have been pursuing, virtually single-handedly in Europe, a policy of rescue and shelter of illegal migrants in the obliviousness of the EU institutions, and in opposition to neighbouring countries that are rejecting and sealing off their borders to illegal immigration.

In the meantime, Rome has been pursuing a solution to the political stalemate in Libya, in the hope that the UN-backed Libyan Political Agreement (LPA), signed in 2015, would finally take off and help the Tripoli government establish control over its borders and as a result over migrants routes across its territory.

But the deadlock between Tripoli and the Tobruk-based House of Representatives (HoR) is far from over. Under the influence of renegade General Khalifa Haftar, the HoR is refusing to acknowledge the UN-sponsored Government of National Accord(GNA) formed by Serraj, who also heads the Presidential Council.

READ MORE: Can Russia resolve the conflict in Libya?

Supported by Egypt and Russia, Haftar and his Libyan National Army (LNA) have taken control over much of the country’s eastern region. On Saturday, Haftar’s forces claimed victory against rival armed groups in the southwest of Benghazi, ending weeks of resistance by fighters camped in several tower blocks.

But after the capture of the stronghold, Haftar’s army exhumed the body of Benghazi Shura Council’s leader, Jalal Makhzoum, and put him on public display outside the Saiga Camp. It was an act that reminds of the crimes committed by the Islamic State of Iraq and the Levant (ISIL, also known as ISIS), Libyan sources say.

“This is a criminal and inhuman act committed by fighters who identified themselves as the Libyan National Army,” said the Tripoli-based Presidency Council (PC) in a statement issued on Sunday. The PC called upon all tribes in the east, as well as activists, politicians and media outlets to condemn the act.

The statement condemned Haftar’s calls for violence and bloodshed in Tripoli, accusing him of seeking to re-establish a dictatorship. “We condemn the statements made by the so-called General Command and its leader Khalifa Haftar about his threats to enter Tripoli by force, which could cause bloodshed in the capital.”

On Friday, Haftar’s supporters infiltrated a peaceful protest in Tripoli that demanded an end to the presence of militias in the capital. The protesters on Martyrs’ Square chanted hate slogans against the city of Misrata and its people, a strong ally of the government in Tripoli.

Haftar’s territorial gains in Benghazi add to the successful takeover of key oil ports, two of Libya’s biggest oil terminals in the so-called Oil Crescent, from the Benghazi Defence Brigades on March 3. The House of Representatives, loyal to Haftar, has said it will no longer share the revenues of the oil sales with the government in Tripoli, thus defying a UN-resolution requiring that Libyan oil be sold by the National Oil Company based in Tripoli.

The consequences for the central government led by Serraj could be catastrophic, as a drop in oil revenues would accelerate the country’s financial collapse.

But Haftar is unlikely to acknowledge the UN-sponsored plan for Libya, as long as Russia will grant him its support. Russia has made a public display of its support for Haftar by inviting him to Moscow and promising to extend a helping hand in the name of the common battle against “terrorism”.

Moscow’s involvement in Libya, with security contractors allegedly deployed in the east of the country, has prompted a top US commander to elicit a stronger role by the Trump administration in the North African country.

“Russia is trying to exert influence on the ultimate decision of who becomes and what entity becomes in charge of the government inside Libya. They’re working to influence that decision,” Marine General Thomas Waldhauser, head of US Africa Command told the Senate Armed Services Committee.

“This is very concerning,” said Waldhauser, whose testimony also focused on the economic stalemate that puts many young Africans at risk of being co-opted by “terrorist groups”, or pushed into the web of human traffickers.

Frontex says that while migrants arriving from the Middle East and Asian countries via the Western Balkans route have sharply declined, those taking the Central Mediterranean route, from Libyan shores to Italy, are steadily increasing.

Arrivals from West Africa saw a ten-fold increase in comparison to 2010. The majority of these migrants are from Nigeria, Eritrea, Guinea, Ivory Coast and The Gambia.

Most of the migrants arriving in Italy try to move onwards to other EU countries, often resorting to smugglers.

However, by the end of 2016, some 176,000 migrants were still in Italy due primarily to restrictions imposed by neighbouring states at the northern borders, says the UN Refugees Agency. 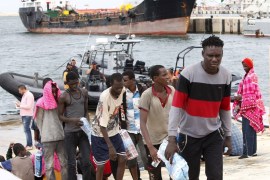 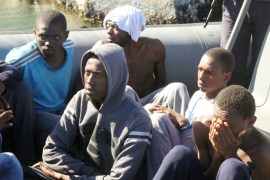 Dozens of people feared dead in shipwreck off Libya

More than 100 people rescued off Libyan coast, but 25 are still missing in latest boat disaster in the Mediterranean. 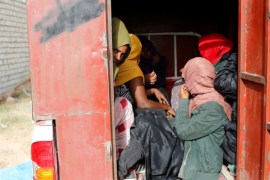