Nairobi, Kenya – One month after Al Jazeera published the story of Dorcas Kiteng’e’s struggle for cancer treatment in a nation whose doctors are on strike, the 25-year-old has died due to lack of proper care.

Some 5,000 public sector doctors walked out on December 5 after Kenya’s leaders failed to make good on a 2013 agreement to raise salaries, hire new physicians and improve conditions in public hospitals. The standoff between the health ministry, which lost $53 million last year due to corruption, and the doctors, continues to drag on. Nobody knows how many hundreds or thousands of Kenyans have died as a result of the government’s refusal to pay and the doctors’ refusal to return to work until that happens.

This is the story of one of those victims – the final days in the life of Dorcas Kiteng’e.

Al Jazeera met Kiteng’e on January 30. She was stoic, sitting in a wheelchair outside Kijabe Hospital, which became overwhelmed with Kenyans seeking treatment after public hospitals turned them away when the doctors walked out.

Kiteng’e had been sick since December, suffering from abdominal pain and having trouble walking.

Many Kenyans prefer to avoid the nation’s understaffed and under-resourced public hospitals if they have the money to afford private care. At public hospitals, “sometimes you are told there is no blood,” Mutambuki says. “You’re told, ‘Buy syringes, go and find someone to give you their blood’.”

“It’s a bad system,” Mutambuki says. “Our hospitals are not for life. They’re for death.”

In January, Mutambuki took Kiteng’e to three different private hospitals in Nairobi. But all were either too overburdened to perform the surgery to remove cancerous tumours from her ovaries and breasts, or demanded more money than her family could afford.

At last, the doctors at Kijabe that day declared Kiteng’e fit for surgery, so her family cobbled together the 100,000 shilling (about $1,000) deposit and were told to come for the operation the following week. But “it was just being delayed, delayed, delayed,” Mutambuki says. There was a backlog of surgeries, likely due to the abnormal number of Kenyans seeking care, so they’d have to wait until the following week instead.

But by the time a surgeon reviewed Kiteng’e’s medical imaging, her cancer had reached stage four. Instead of surgery, she’d need to go back to Nairobi in the hopes of finding a hospital that would offer her chemotherapy.

Kenyatta National Hospital, Nairobi’s largest public health facility, had been operating on only a small staff of military doctors since the usual doctors went on strike. But some doctors still operated privately out of an adjacent clinic, so Mutambuki took Kiteng’e there. For two weeks they waited, hoping the chemo would come through.

“That two weeks, Dorcas was in so much pain. She used to cry and cry,” Mutambuki says. “They’d tell her to take drugs for the pain, but in three hours the pain would be unbearable.”

Mutambuki begged a doctor to admit Kiteng’e for a biopsy and chemo.

“He said, ‘If there was no strike, I would admit you at Kenyatta immediately.’ He said they would do a biopsy much cheaper” than the private clinics, Mutambuki recalls.

“But he said there would be a long queue,” so Mutambuki decided she had no choice but to transfer Kiteng’e to a private hospital instead.

To cheer her up while she waited there, Kiteng’e’s family kept her company, filling the small hospital room with chatter and warmth. But on Wednesday night, Kiteng’e died there, alone.

The next day, Kitenge’s husband, Daniel, walked around in a daze. “He was unhinged,” Mutambuki says of her brother. “He has these two little kids – seven and three. He doesn’t know where he’ll start. He has never had to take care of those kids by himself.”

Mutambuki believes Kiteng’e’s life might have been saved, if only Kenya’s public sector doctors had been around to treat her during the three-month ordeal.

If she could tell Kenya’s leaders one thing, she says, “I would ask them to stop making all this political.”

“It becomes a war of words instead of trying to find solutions,” says Mutambuki of the ongoing standoff.

“The president is in power. What is he doing?” she says of Uhuru Kenyatta, who is seeking re-election this August. “He should be talking to the doctors. What is all this childishness? Why can’t he take responsibility and do what is right with the doctors?”

Earlier last week, the government and the medical union seemed close to ending the standoff. They’d drafted a revised agreement that would have allowed for a 50 percent pay rise – still less than half of what the doctors were entitled to under the original agreement.

According to news reports and posts by various medical union members, the government refused to send the agreement on to Kenya’s governors for ratification until the doctors called off the strike.

But having entered into deals that Kenya’s government has reneged on before, the doctors refused, at which point the chairman of Kenya’s Council of Governors, at a press conference flanked by the president, announced the government was withdrawing its offer.

In late January, the Naivasha Sub-county Referral Hospital, a two-hour drive north of Nairobi, was eerily empty on account of the strike. The blue door to the operating room was locked shut.

“There’s no one to do the operations,” explained Douglas Osoro, a pharmacist there.

Osoro said the hospital couldn’t look more different from usual. He typically works 12-hour shifts with barely a moment to rest between making the rounds with doctors to visit patients and recommend certain treatments, fulfilling the prescriptions, and then going along with the nurses to help administer the drugs.

Public sector nurses are threatening to strike as well, for similar reasons of pay and overworking.

“One nurse here takes care of 40 patients in a night!” Osoro said. “If nurses go, people will stop trying to come to the hospital entirely because there’s no point.”

Recently, some Kenyan nurses did precisely that, protesting against delays in the payment of their salaries and delays in promotions.

According to Kenya’s medical union, Kenya has registered about 9,000 new doctors in the last 32 years, but an estimated 25 percent of them are no longer active. A major shortage has resulted from a lack of funding. In 2014, Kenya was estimated to spend just $78 of its budget on healthcare per capita. In contrast, South Africa spent $570, the UK spent $3,935 and the US spent $9,403 a person that year, according to estimates by the World Bank.

Even basic treatment is sometimes unavailable in Kenya’s public sector.

“My second day, I was really shocked when I saw a patient who couldn’t afford dialysis,” said Osoro of his residency. “If you look at the amount of people who have kidney problems, dialysis is supposed to be a basic, basic service to the public. It costs about 10,000 shillings (less than $100) per session.”

And yet, “If you don’t have the national health insurance fund, you have to pay it out of pocket,” Osoro said. “Nine out of 10 people in Kenya can’t afford that.”

“The system is failing everyone – us, and the patients,” said Marcy Gichinga, a pharmaceutical intern in Naivasha who was also on strike.

“If doctors had their way, we wouldn’t just leave patients,” Gichinga said. “If there were a way to reach an agreement without going on strike, we would do it.”

Health officials have attempted to paint the 2013 agreement as unreasonable, arguing a new one should be written in its place. Wilfred Machage, chairman of Kenya’s Senate Health Committee, called that document “illegal”, saying, “Nobody has prevented doctors from coming up with another legal document”.

“These are problems that we want solved,” said Osoro, of Kenya’s underfunded and overburdened public healthcare system. “I sympathise with people who think doctors want money and it’s a bit selfish. But ultimately this is for the patients. We want better conditions for our patients. Our patients are everything to us.”

Dorcas: ‘She was beautiful’

The day after Kiteng’e died, Mutambuki recalled her sister-in-law as a timid-but-loving mother of two. When Mutambuki’s brother first married Kiteng’e, “she was just a village girl and very shy”.

“But soon, whenever we came home she would welcome us. She was always cooking for us,” Mutambuki says. “She’d run around trying to make us comfortable. She was beautiful.”

Mutambuki recounted Kiteng’e’s final Christmas Eve when, despite her pain, she lifted herself to slowly rotate her hips to the jovial Taarab music Mutambuki had put on the stereo.

“There’s a song called Pole Samaki” – Swahili for Sorry, Fish. “It talks about how fish suffer. When a man is eaten by a fish or a shark, it makes news. But when we eat a fish, nobody cares. That is the one she danced to.”

“That made Dorcas get up and dance despite her pain,” Mutambuki says. “She got up and danced the whole track.” 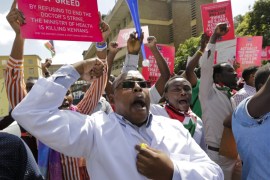 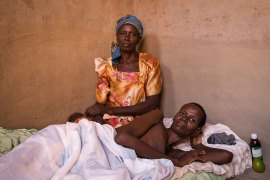 Since its only external beam radiotherapy machine broke in April, Ugandans having been dying of treatable cancers.