The fourth round of UN-led Syria talks, dubbed Geneva 4, wrapped up last week with a tentative agreement between warring sides on an agenda for future negotiations – but a problematic work plan coupled with shifting international priorities could draw out the already lengthy diplomatic process.

But the negotiations, the first in 10 months, turned out be little more than closed-door consultations – evidence of a diplomatic process kept on life-support by the international community for lack of any other option.

Any real movement on the key opposition demand for a political transition remained stalled amid disagreements over the make-up of the opposition delegation and the government’s demand to add “counterterrorism” as a core subject of negotiation.

De Mistura originally convened the talks to tackle the tenets of UN Security Council Resolution 2254, which deals with the subjects of governance, UN-supervised elections and the formation of a new constitution.

But discussions on political transition were sidelined by a deadly suicide attack on military installations in the government-held city of Homs at the outset of the talks, as representatives of Syrian President Bashar al-Assad‘s government and its Russian backers increasingly shifted the focus towards the necessity of combating “terrorism”.

Regardless, de Mistura said the parties ultimately agreed to the framework of an “overall political package for a negotiated transitional political process” in Syria made up of four core subjects of debate, or “baskets”. The first three were given clear implementation timelines and expectations, but analysts say the fourth may prove problematic.

During the next six months, parties are expected to address all issues related to the establishment of “credible, inclusive and non-sectarian governance” and to set a schedule and process for drafting a new constitution. UN-supervised elections should be held within 18 months.

The fourth basket, added due to government insistence and Russian pressure, deals vaguely with issues related to “counterterrorism and security governance, and also confidence-building measures”.

In all previously held diplomatic rounds – from Geneva I to Vienna to Astana – Damascus has framed the war in Syria as a fight against “terror”, but analysts say the inclusion of “anti-terrorism” as a central and equally weighted topic of discussion could sideline momentum towards a political solution.

Further complicating matters are the commonalities between the UN-led process and a separate Russian-led track in the Kazakh capital of Astana. While the Geneva track addressed “internal and external conditions conducive to the spread of terrorism”, de Mistura said, all “immediate operational counterterrorism issues” would be dealt with in Astana on March 14.

He urged parties in Astana to “do everything possible” to address confidence-building measures, such as the release of arbitrarily detained persons and the assurance of humanitarian access to besieged and hard-to-reach areas of Syria. Both were key opposition demands in Geneva.

“What’s happening in Astana was basically a way to steer and reshape Geneva – not necessarily replace it, but to make it a Russian-led process,” Hassan Hassan, a senior fellow at the Tahrir Institute for Middle East Policy, told Al Jazeera. “And I think, to a large degree, they’ve succeeded.”

Since the last round of UN-led talks, Russian military intervention has helped to shift the tide of the war in Assad’s favour, culminating in the government capture of Aleppo in late December. Since then, Moscow has helped to forge a fragile nationwide ceasefire.

While de Mistura reiterated several times that the Geneva and Astana tracks were “two hands working together”, Russian influence at the Geneva talks was clear.

Days later, at the final ceremony, both de Mistura and the HNC had changed their stance by accepting the additional basket.

De Mistura created an opportunity for the regime to change the conversation, to play with time and to negotiate about negotiations and not about political transition.

“The addition of a terrorism basket in Geneva is dangerous,” writer and political analyst Omar Kouch told Al Jazeera, noting that it could derail the push for political transition. “De Mistura created an opportunity for the regime to change the conversation, to play with time and to negotiate about negotiations and not about political transition.”

Ayham Kamel, Middle East and North African director at the Eurasia Group, said the negotiating framework, which entails that all four baskets are discussed concurrently, is “conducive” to bringing the government to the table.

“The structure prevents the government from claiming there is no point in having political discussions before counterterrorism talks. They don’t have that excuse any more,” he told Al Jazeera.

The muddled, overlapping diplomatic agenda will likely be further complicated by the narrowing priorities of key international players and the shifting trajectory of the war.

“Russia’s approach is problematic, as is the approach of the US, Turkey and Jordan,” Hassan said. “None of them is seizing the opportunity to steer the conflict in a less bloody direction. Instead, they are all focused on their own narrow goals.”

Jordan, a key backer of rebels in Syria’s south, has shifted its strategy over the past year after a series of deadly attacks linked to the Islamic State of Iraq and the Levant group (ISIL, also known as ISIS). Rumours of increased contact between Amman and the Syrian government, in addition to the presence of Jordanian representatives at the Russian-led talks in Astana last month, suggest that Amman is tapering its agenda across the border to protect against domestic threats.

The United States and Turkey, on the other hand, are focused on making “quick, tactical gains on the ground, instead of investing in long-term stability”, Hassan said.

Once a leading backer of the war to oust Assad, Ankara’s priorities have narrowed since last summer’s attempted coup to a primary focus on pushing armed Kurdish groups and ISIL back from its border. This shift has been accompanied by a growing rapprochement with Moscow; the two powers cobbled together a shaky truce and have worked to consolidate the ceasefire through meetings in Astana. On Friday, Putin hosted Erdogan in Moscow, where the two leaders congratulated each other on their “exceptional cooperation” in Syria and reaffirmed their commitment to reaching a settlement.

Turkish troops, with the help of allied Free Syrian Army (FSA) fighters, now control a large swath of territory inside Syria, and Damascus is not at all happy about it. In a letter to the UN on Friday, Syria’s foreign ministry reiterated its calls on Ankara to withdraw its troops, accusing it of “supporting terrorism”.

The US has remained largely absent on the political level in Syria since Donald Trump assumed the presidency, but on the ground, the Pentagon announced this week that it was deploying hundreds of additional troops to Syria as part of a push to retake ISIL’s self-declared capital of Raqqa.

A sizeable portion of those troops are now serving as a buffer force between the FSA and the SDF in the northeastern city of Manbij, as the race for Raqqa threatens to pull the two NATO allies into open conflict.

“The narrative on the ground has fundamentally shifted more permanently towards a focus on confronting terrorism,” Kamel said. “The challenge now is whether these new dynamics can be integrated into the political process. If not, then bit by bit the negotiators in Geneva will become irrelevant and things will head further towards the Astana project, which means less politics, less concessions and more military.” 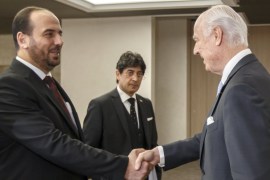 Warring sides agree to more negotiations as week of unsteady talks, threatened by a crumbling ceasefire, comes to close. 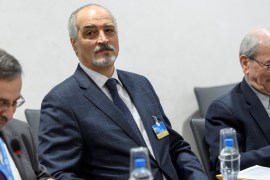 Government delegation accuses opposition of holding talks ‘hostage’ as they disagree over discussion on ‘terrorism’. 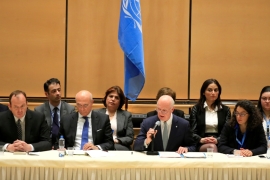