Gaza City – People initially laughed and told her she would fail, but 22-year-old civil engineering graduate Majd Masharawi persisted – and after more than a year of experimenting, she believes she has a solution for Gaza’s stalled reconstruction.

Masharawi and her friend, Rawan Abdelatif, last year finished creating a type of brick that can be used to literally rebuild Gaza from its ashes. Green Cake is the world’s only brick that uses coal and wood ash as filler material instead of the usual sand and aggregate. It is stronger than an ordinary brick, yet half the weight and price.

The pair came up with the concept after brainstorming ideas to launch after they graduated to help decrease Gaza’s high unemployment rate, which exceeds 40 percent.

“We asked ourselves, what is Gaza suffering from? The main thing is a shortage in building materials,” Masharawi told Al Jazeera. “I told [Abdelatif], cement is a big issue. Let’s find an alternative.”

Amid the decade-long Israeli-Egyptian siege of Gaza, many materials deemed “dual-use” have been banned from entering the Palestinian territory, or are allowed only in limited quantities.

This has stalled Gaza’s ability to rebuild after the 2014 Israeli offensive, which destroyed 18,000 homes. About 75,000 people remain displaced, according to the United Nations, with many still living in temporary corrugated iron structures. Several babies died this year amid freezing conditions and a lack of heating.

So far, Gaza has received only a third of the cement required for reconstruction, and only 20 percent of the destroyed housing units have been rebuilt. Due to the limited amount of cement allowed into the territory, bricks are costly and of poor quality, Masharawi said.

Searching for an alternative, she learned that an enormous amount of ash goes to waste, as much of the world relies on coal to generate electricity. The United States and China together produce 800 million tonnes of ash annually, half of which ends up in landfills, Masharawi noted.

In Gaza, three restaurants produce 100 kilograms of ash each day, while more than seven tonnes of ash is produced weekly in mud pot factories. Masharawi realised that recycling the ash to make bricks would make great use of a material that would otherwise be buried in the sand, posing an environmental hazard.

“I thought this is a good idea because it won’t be just applicable in Gaza, but all over the world,” she said.

After 10 failed attempts, Masharawi took her first prototype brick to a local factory for a compressive strength test to make sure that it could withhold weight, but it collapsed, having sustained a strength of only 0.2 megapascals out of the required three.

“The lab man laughed at us and said, ‘Please girls, go to the kitchen and make something else; maybe actual Green Cake,'” Masharawi recalled.

She and Abdelatif continued experimenting, changing the way they mixed the substance to make it more homogenous and adding new materials. Dozens of samples later, they strengthened their prototype to 2.7 MPa; it now stands at 3.4 MPa.

They named it Green Cake for its environmental friendliness and light weight. Out of 800 applicants, they won first place in a local start-up incubator called Mobaderoon III, which provided them with funds to help finance their first production in September, when a client commissioned them to build an exterior wall with 1,000 bricks.

Green Cake’s cheap price and excellent quality has attracted local interest, but it has been difficult to promote internationally amid the siege. The women were supposed to compete in the finals of the MIT Arab Startup Competition in Saudi Arabia last year, but could not get permission to leave through the Erez checkpoint.

“At the time I was very disappointed,” Masharawi said. “While we were presenting our idea on Skype, we lost connection, so we finished presenting over a phone call.”

If you want to do something, you have to believe it and do it with faith … because you're the only person responsible for the future.

Testing the brick has entailed another set of challenges. While they could conduct local tests on its strength, absorption and gravity, there are no laboratories in Gaza to test out its durability and fire resistance, and to conduct a chemical analysis.

“I told Rawan we have to try to send a prototype to the West Bank, but it’s not allowed,” Masharawi said.

She received some good news last summer, after tying for first place out of 40 competitors in the Japan Gaza Innovation Challenge, which provides investment opportunities for projects that enhance living conditions in Gaza.

“Her idea to produce construction materials from used ash is truly innovative, and we highly value her passion to rebuild destroyed Gaza with her Green Cake,” judge Seiichiro Yonekura told Al Jazeera.

The most thrilling part for Masharawi was when the Japanese delegation took her Green Cake brick back to Japan to complete the remaining tests, which were successful.

“They changed my life deeply; they did many things for me that I couldn’t do in Gaza,” Masharawi said. “They asked me, ‘What do you want?’ I told them I want more knowledge about material science, about testing, about the engineering business, and this is what I’ll get from them.”

As part of the prize, she will travel to Japan this month to train with the construction and engineering corporation Maeda, where a team of scientists will help her to further develop her brick. “Now I have hope again,” Masharawi said.

And as the price of cement in Gaza continues to rise, Masharawi says she is more determined than ever to find an alternative.

“There are no limits for human beings’ minds,” she said. “If you want to do something, you have to believe it and do it with faith … because you’re the only person responsible for the future.” 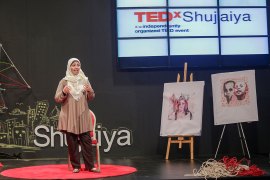 One Palestinian female artist’s battle with cancer in Gaza. 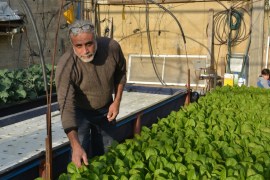 Alternative farming on the rise in besieged Gaza

As fertile land shrinks and water crisis deepens, Palestinians are searching for different ways to feed their families.