New Delhi, India – Sangeeta Gupta still cannot forget the moment she was “assaulted by eight to 10” men in the presence of the police, who she says did not intervene.

“The goons should be arrested as soon as possible,” the undergraduate student at Aurobindo College of Delhi University said, referring to Akhil Bharatiya Vidyarthi Parishad (the All Indian Students Council) or ABVP.

The ABVP is a nationalist student group which has been accused of assaulting students and teachers on the campus on Tuesday and Wednesday.

Gupta on Thursday joined other students and activists in front of the headquarters of the Delhi Police to demand that the police register an official complaint, a First Information Report, against ABVP activists and their supporters.

“I came here for justice. If the Delhi Police will not give me justice then who else can,” she said, showing a prescription for medicine that she brought to prove she was admitted to hospital after the attack.

On Tuesday, ABVP activists disrupted a two-day seminar organised by the Literary Society of Ramjas College at Delhi University entitled, Cultures of Protest.

More than a year on, Delhi Police has yet to file a charge sheet for the case, but the ABVP made it clear they did not want Khalid and Rashid on the campus.

The college’s eventual decision to cancel Khalid’s participation did not pacify the ABVP, which dominates the student union at Delhi University.

Amnesty International India said there was a “growing threat to freedom of expression on Indian university campuses”.

“Universities are supposed to be safe spaces for debate and discussion. But the events at Ramjas College are a shameful reminder of how intimidation and threats continue to restrict free speech on university campuses,” Aakar Patel, head of Amnesty International India, said in a statement.

Khalid has been vocal against the government’s military operation in the mineral-rich tribal areas of Chhattisgarh and Jharkhand – two states ruled by Hindu nationalist Bharatiya Janata Party (BJP).

Violence erupted after students, led by the leftist All India Students’ Association and Students’ Federation of India, marched against ABVP’s actions.

“The police was present there, but they didn’t save us; instead they helped ABVP activists in beating us,” Prakash told Al Jazeera. “There are many students who were admitted to hospitals because of the injuries.”

Threats of rape and acid attacks

Swali Prakash, an undergraduate student at the university, told Al Jazeera that she wanted the culprits to be put behind bars.

“Five to six ABVP activists asked me if I am a communist, they said if you are a communist we will throw acid on your face and rape you,” a visibly terrified Prakash, a student of English literature, said. She declined to reveal the name of her college out of fear of reprisal.

Dozens of students and faculty members have been injured in the incident that raises many questions about the freedom of speech and security on campuses around the country.

This is not the first time that the ABVP has been accused of resorting to violence to send a message.

READ MORE: Kanhaiya Kumar on sedition and ‘freedom’ in India

A student of JNU, Najeeb Ahmad has been missing since October last year after a scuffle with ABVP activists. In 2015, the screening of a documentary on the Muzaffarnagar religious riots was disrupted at Delhi University’s Kirorimal College.

Since Narendra Modi of the BJP came to power in 2014, far-right Hindu groups have been emboldened, with vigilante groups taking the law into their hands – such as the 2015 lynching of a man rumoured to have eaten beef – to enforce their interpretation of nationalism and Indian culture.

Sumangala Damodaran, professor at Ambedkar University based in Delhi, said: “Universities are being targeted, teachers and students are beaten, freedom of speech and expression is being curbed.”

“The [Modi] government has let loose their goons everywhere in this country and these kinds of incidents are increasing day by day,” she said.

In a Facebook post, Danish Shafey, a faculty member of Delhi University, accused ABVP activists of attacking seminar participants without any provocation.

Shreerang Kulkarni, national media head of the ABVP, denied that their supporters assaulted anyone.

“They [the students] are lying, our members didn’t assault anyone,” he said, admitting nonetheless that “there was a fight between his supporters and the AISA and SFI activists”.

Kulkarni told Al Jazeera that they have no problem with the seminar but his groups will not allow Khalid to speak there. He accused Khalid of “chanting slogans against our country”.

Khalid was expected to speak about the war in the Adivasi areas, India’s tribal areas.

The government has deployed tens of thousands of troops in the Bastar region of Chhattisgarh state – the epicentre of a decades-long Maoist rebellion.

Activists say innocent tribal people are bearing the brunt of police excesses, such as mass sexual violence and extrajudicial killings.

The ruling BJP, the political wing of the RSS, and ABVP criticise those activists who oppose a military solution to the conflict.

As students, academics and activists from across Delhi staged a sit-in in front of the Delhi Police headquarters, Dependra Pathak, the Delhi Police spokesman, assured action against “errant policemen”.

“During yesterday’s protest in North Campus, it has come to notice that a few cops had indulged in inappropriate and unprofessional action. An inquiry has been instituted and strict action will be taken,” Pathak said on Thursday.

Hours later, three policemen were suspended and the case was transferred to the crime branch, but so far no arrests have been made.

Khalid, who gave a speech at the police headquarters, said ABVP and its supporters want to “create an environment of fear”.

“Goondagardi [hooliganism] is not nationalism,” he said, adding that “one day, democracy will win and all those who are against [democracy] … will lose”. 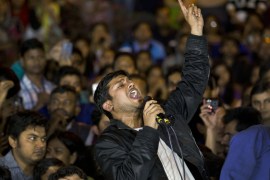 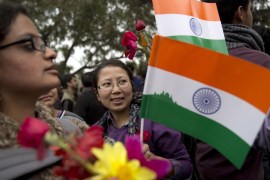 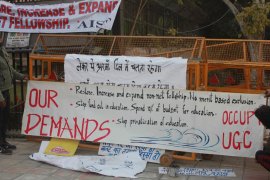