Sinwar will take over from Haniya, who served out his two-term limit some time in April. Sinwar was jailed by Israel in 1988 and spent the next 23 years in prison, where he was a key leader of Hamas members in the Israeli prison system.

Palestinian sources in Gaza close to Hamas described Sinwar’s rise to power as a bridge between Hamas’ political leadership and its powerful armed wing, Izzedine al-Qassam.

“Sinwar’s ascension to the leadership position was not something dramatic or unexpected. His election shows that Hamas has democratic institutions and a pool of leaders who can step up to leadership positions when they are called upon,” said Lebanon-based senior Hamas leader Osama Hamdan, who runs the group’s foreign-relations portfolio.

The Palestinian sources, who declined to be identified for this story, said Sinwar could be instrumental in smoothing Gaza’s relations with Egypt and could ultimately play an important role in trying to avoid another costly military confrontation with Israel given his “security background”.

The sources added that, contrary to previous reports, Sinwar was not a co-founder of Izzedine al-Qassam. He was in an Israeli prison when the armed group was founded in 1989.

Avi Issacharoff, an Israeli journalist, draws a distinction between Sinwar and regular Hamas politicians such as his predecessor Haniya or Khalil al-Haniya, who was also elected last week as Sinwar’s deputy.

Issacharoff says Sinwar is cut from a different cloth in the sense that he does not come from a purely political background. Rather he hunted down and killed “Palestinian collaborators”.

But Issacharoff believes Sinwar is not an “adventurer”, meaning that despite his background, he would not be reckless enough to drag the Palestinians in Gaza into an unwanted military confrontation with Israel.

Issacharoff said Israeli prison officials told him that Sinwar was treated for a serious head surgery around 2006 that saved his live.

Although Hamas is a “movement”, structurally it operates like a system of “federations” that includes Gaza, West Bank, Hamas prisoners in Israeli jails, and Hamas members abroad or in exile.

Each federation elects its own consultative council and local leader.

These elections will set the stage to elect Hamas’s overall general congress, or the General Consultative Council, which in turn will elect its political bureau and its head, to replace the current leader Khaled Mashaal, which will take place some time this April.

Hamas’ new crop of leaders will face numerous thorny challenges that will determine whether: there will be yet another war in Gaza; reconciliation with its Palestinian rival Fatah; and rapprochement with Egypt, which treats Hamas-ruled Gaza as more a foe than an impoverished neighbour or an Arab brother.

Currently, Egypt, which supports Hamas’ rival Fatah, has a frosty, if not antagonistic, relationship with Hamas because of its control of Gaza.

Sinwar’s ascension to power in Gaza will not bring any dramatic change to any of Hamas’ positions on any of the issues it is currently dealing with.

This is especially true regarding the reconciliation talks with its rival Fatah or its regional policies towards Israel or the Arab states, according to several senior Hamas officials who spoke to Al Jazeera on the condition of anonymity.

These officials say that Hamas operates on consensus and voting in its decision-making process, which prevent its leaders from ending up behaving without restraint or assuming dictatorial powers.

But a new challenge arose during a meeting in Washington DC on Wednesday between Benjamin Netanyahu, the Israeli prime minister, and Donald Trump, when he dropped the long-held US policy of supporting a two-state solution.

Unlike Fatah and the Palestinian Authority headed by President Mahmoud Abbas, who staked their very existence on the Israeli and American acceptance of the two-state solution, Hamas officials see no existential threat to their  political standing.

“Hamas is relatively unfazed by the era of new politics heralded by the Trump administration. They have no expectations that the road ahead will be anything other than as difficult as it has been or that it may even get worse again,” Beverley Milton-Edwards, a visiting fellow at Brookings Doha Centre, told Al Jazeera.

All forms of resistance

Hamdan, the Hamas foreign-policy chief, said the group would not be affected by the new US policy and would persist with all forms of resistance to Israeli occupation until statehood was achieved.

Asked if resistance means just engaging in military confrontations with Israel, Hamdan said: “That’s only a part of it, and only if we are attacked first.

“Resistance for us could be peaceful one such as boycotting Israeli consumer products, challenging Israel legally and defending ourselves militarily should Israel attacks us.”

On whether Hamas is willing to engage in peace talks with the Israeli government to reach a peace deal, the officials said: “Talking peace with the Israeli, under the current conditions, is futile.”

They say Hamas has learned from the experience of the Palestine Liberation Organisation and the Palestinian Authority, both of which have little to show after 24 years of negotiations with the Israelis. 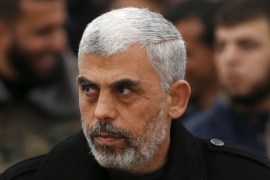 Yahya Sinwar, known as the founding member of the Hamas military wing, was chosen in secret elections.