When fighters from the Islamic State of Iraq and the Levant (ISIL, also known as ISIS) group captured Kirkuk last October, hundreds of people poured onto the streets to help security forces fight back in the northern Iraqi city.

Among them were dozens of fighters under the blue-and-white Turkmen banner, representing a rare occasion when Iraq’s third-largest ethnic group united to defend the community.

Fighters representing the roughly two to three million Iraqi Turkmen – approximately 10 percent of Iraq’s population – are part of a wider mobilisation to defend what they call Turkmen Eli, or “Land of the Turkmen”. This thin swath of land extends northwest to southeast along the frontlines between ISIL, the Iraqi army, and the Kurdistan Regional Government (KRG).

Since 2014, thousands of Turkmen have signed up to fight against ISIL, including with the Popular Mobilisation Forces (PMU), a group of predominantly Shia militia that have provided vital momentum to Iraq’s war effort but have been also repeatedly accused of committing human rights abuses.

The anti-ISIL Turkmen fighters find themselves facing other Turkmen who have joined ISIL – a dark twist in a war that has seen many communities pitted against each other.

Arshad al-Salihi, head of the Iraqi Turkmen Front, has called for the establishment of an autonomous zone following the retaking of Turkmen regions around Mosul. But many doubt the feasibility of such a zone, particularly given the sectarian divisions that have torn Iraq’s Turkmen apart since the toppling of Saddam Hussein in 2003.

Iraq’s Turkmen have suffered immensely since ISIL’s emergence. Mehdi al-Beyati, a spokesperson for the Turkmen Rescue Foundation and former Iraqi minister of human rights, estimates that 600,000 Turkmen have been driven from their homes and scattered into refugee camps. Another 1,200 Turkmen women and children are still being kept as hostages.

“We were completely unable to defend ourselves when the conflict began,” Beyati told Al Jazeera, noting that the Iraqi government had previously refused to arm the Turkmen. Meanwhile, he said, “every single Turkmen region has faced the devastation of its infrastructure – from schools to hospitals, from markets to social services. Economically, everything collapsed. There needs to be serious and urgent reconstruction as well as protection before any refugees will return home.”

The Turkmen have been an integral part of the multicultural, multi-confessional mosaic of northern Iraq for centuries. But after Saddam Hussein took power in 1979, the group became caught up in a violent struggle to cement Arab national identity.

In the 1980s, they were targeted, alongside Kurds and Assyrians, by “Arabisation” campaigns that drove them from their villages and replaced them with Arab population, part of an effort to make ethnic separatism less feasible in Iraq’s border regions. The Turkmen language was banned, as were Turkmen names.

“Because of what we lived before 2003, many hoped that a new era would begin for Iraq after the fall of Baathist dictatorship,” Beyati said. “Unfortunately, we entered a new stage of repression.”

The lack of security and economic stagnation across Iraq led to violence in the years that followed. The political system installed during the US occupation was based on sectarian representation of Shia Arabs, Sunni Arabs, and Kurds.

But the Turkmen were left out, and the system led to increasing social sectarianisation. About 60 percent of Turkmen are Shia Muslims, while most of the remainder is Sunni, although roughly 1 percent are Catholic.

There is no alliance unifying Turkmen - they've all made alliances with other political parties, and so there is no representation of the Turkmen as Turkmen.

Saad Salloum, a Baghdad-based advocate for minority rights, noted that “after 2003, sectarianism took on a political character in Iraq it had never had before.

“There is no alliance unifying Turkmen – they’ve all made alliances with other political parties, and so there is no representation of the Turkmen as Turkmen,” he said. “The primary challenge facing the Turkmen community currently is internal.”

The city of Tal Afar offers a sobering example. It was once home to 200,000 Turkmen, mostly Sunni. As sectarian identity became increasingly important in everyday life and violent incidents against the Shia minority grew in number, the community was left increasingly ghettoised. A 2007 double truck-bombing slaughtered more than 150 people and shattered the veneer of calm that had previously masked tensions.

When ISIL swept through Tal Afar, it fuelled sectarian tension in the city pitting Sunni Turkmen against Shia Turkmen, who were expelled en masse. It is unclear whether those taking part in the violence will reintegrate post-war alongside the group’s victims, if and when they return.

Calls for Turkmen autonomy in Iraq avoid delicate questions such as these. Instead, they look to similar self-rule proposals by religious minorities such as the Yezidis and Assyrians as inspiration. Both groups have received widespread international attention, but the Turkmen’s plight has been largely ignored.

OPINION: Kirkuk may be key to national reconciliation in Iraq

Beyati, whose organisation aids Turkmen refugees, argued that the presence of an autonomous region could reassure refugees hoping to return to their homes. “We are demanding international protection be extended over Turkmen and other minority regions around Mosul,” he told Al Jazeera, suggesting a district be created through which Turkmen could advocate for themselves. He also stressed the need to expand Turkmen representation in the Iraqi central government, through a parliamentary quota that would guarantee seats proportional to their numbers.

But even if such a proposal manages to bring the fractured Turkmen community together, it’s unlikely to succeed without the presence of armed forces to protect returnees. “Turkmen refugees are afraid they will be prevented from returning to their homes by local actors interested in creating demographic changes,” Beyati added.

Threats of demographic warfare haunt Turkmen history. Following Saddam Hussein’s ousting in 2003, Kurdish forces across northern Iraq began a process of Kurdification, ostensibly to reverse the Arabisation policies of previous decades. In practice, this meant uprooting tens of thousands of civilians who had been forced to move to the area through no fault of their own.

Turkmen were targeted, as Kurds sought to cement their numbers in areas they hoped to incorporate into a future independent Kurdish state.

Nowhere are Kurdish-Turkmen tensions clearer than in Tuz Khurmatu, a city 90km south of Kirkuk. The population is split between Sunni Kurds and Shia Turkmen, with Turkmen forming a bare majority.

But in recent years, Kurdish forces have been in charge of security – and Turkmen claim that dozens of people have been forced from their homes as a result. Turkmen have organised militias to protect themselves and clashes have erupted repeatedly, with the city now divided into barricaded cantons.

Kirkuk is no stranger to such divisions, either. In 2014, ISIL briefly occupied the city before being driven out by Kurdish fighters. They have not left since.

KRG authorities have been intentionally vague about the future, leaving room for leaders with their own designs. Since the October attack on Kirkuk, authorities have expelled Arab and Turkmen refugees who fled ISIL-controlled areas, accusing them of “terrorist” connections.

Locals cried foul, but were powerless to stop the move.

Historically, the Turkmens’ most ardent backer has been Turkey, which is also an ally of the KRG. Since Iraqi forces began preparing to take Mosul from ISIL, Turkey has stressed its intention of participating, drawing Iraqi ire. Baghdad has seen repeated anti-Turkey protests, as many see the move as an attack on Iraqi sovereignty.

But Turkish journalist Ceren Kenar told Al Jazeera that the country’s interest in Iraq was based on security concerns. “Both Turkey and the KRG are concerned about possible refugee flow if things in Mosul go wrong,” Kenar said, noting United Nations warnings that up to one million people could flee. “Where will these people go?”

She added that Turkey fears Iranian influence in Iraq through its support for the PMU, the Shia-dominated militias that have been involved in forced disappearances and killings of Sunni civilians.

“The violence the [PMU] uses against civilians is not less than what ISIL does,” she claimed. “Many civilians in Mosul are afraid of revenge killings.”

Many Iraqis, however, are unmoved. Rasha Al Aqeedi, a research fellow at Al Mesbar Studies and Research Centre in Dubai and a Mosul native who lived there until 2013, said that many Iraqis opposed Turkish intervention and see it as an “invading power” that could threaten national sovereignty.

She also described the proposals for Turkmen autonomy as “unrealistic”, adding that “for the time being, we’re going to see the rule of whoever has arms on the ground”. 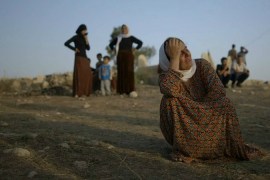 Iraq divided: The fight against ISIL

As the US strikes ISIL targets in Iraq, we report from Erbil on the consequences of the latest foreign intervention.