Gaza City – Living in what has been called the world’s largest open-air prison did not deter astrophysicist Suleiman Baraka from turning his gaze to the cosmos.

“Astronomy is the science of everything. When you study astronomy, you study yourself, because you are part of this cosmos,” Baraka told Al Jazeera from inside his lab at Gaza’s Al-Aqsa University, a small room that he shares with two research students.

Papers and books are piled up next to several desktop computers arranged in a semicircle. A whiteboard is covered with scribbled formulas, while posters of celestial bodies hang on the walls and two telescopes sit in cardboard boxes nearby.

Although humble, the small Centre for Astronomy and Space Sciences aims to put Palestine on the map for research in the field.

“Because we don’t have advanced labs, our students use theory a lot, and they are very strong in it. I have a student who published a book,” Baraka, 52, said proudly.

His own research, which won him a prestigious collaboration with French scientists, involves studying atypical events in the magnetosphere, the region within Earth’s magnetic field.

Currently the holder of the Palestinian astrophysics chair for UNESCO, Baraka in 2010 brought the first telescope into Gaza – a donation from the International Astronomical Union. Since then, Birzeit University in the occupied West Bank, has also equipped its department.

“I cannot work to US standards while trapped like a prisoner in Gaza,” said Baraka, who was banned from leaving the Gaza Strip to enter Israel and the occupied West Bank three decades ago. “December 16, 1987, was the last time I crossed Erez.”

The decade-long Israeli blockade of the Gaza Strip has severely curtailed freedom of movement for the territory’s two million citizens, who must obtain permits from Israeli, Palestinian and Jordanian authorities in order to leave. Thousands of Palestinians in Gaza have consequently missed out on study, business and work opportunities.

According to the Gisha Legal Centre for Freedom of Movement, restrictions on travel increased in 2016, despite being eased somewhat at the Rafah border crossing with Egypt in the last few months of the year.

“Last time I went to the US to work for NASA, it took me seven months to leave and two months to come back, waiting for the border to open,” Baraka said.

But the conflict with Israel has cost him much more than this: His 12-year-old son, Ibrahim, was killed in an Israeli air strike during the 2008-2009 war on Gaza. Baraka later began giving astronomy lessons to his son’s classmates as he worked through the profound sense of loss.

“I started teaching his classmates science and peace, not war and revenge,” Baraka said.

“Because you and me and everybody, you can easily die for an idea or a principle, but the hard thing is to have to live for a principle or a cause – so I decided to live for the Palestinian cause. And the best way of doing it is through science and education.”

It was this sentiment that led Baraka to organise stargazing evenings, which are open to the public. Each week last summer, astronomy students, aficionados and curious members of the public gathered on the roof of Al-Aqsa University to gaze at the universe through a telescope. Some of Baraka’s students have also formed a group, the Gaza Ambassadors of Mars, that holds workshops for youth on modern and ancient astronomy.

As a young man during the first Intifada at the end of the 1980s, Baraka says that he never engaged in armed struggle, but instead taught children in underground classrooms after regular schools were shut down by the military.

“We moved students to houses, mosques and churches. I was working in my father’s butcher shop from eight to two o’clock. In the afternoon, I volunteered as a teacher,” he recalled. “I taught physics and mathematics, geography and history. We taught the history of Palestine, which was forbidden by the occupation forces. Some of my students are now doctors and engineers.”

Several years later, as the second Intifada broke out, Baraka once again found his life steered by the events shaping Palestinian history. For two years, he worked as part of the former Palestinian leader Yasser Arafat’s diplomatic delegation, meeting foreign business representatives. But shortly after the signing of the Oslo Accords, he quit, disillusioned by the political process.

“The conclusion I came up with is that ‘rights’ have no meaning without power … I decided not to be part of the system, because I came to the conclusion that our leadership was not working to apply even what had been agreed upon,” Baraka said.

“There were some differences of opinion that destroyed the integrity of the collective work to make [things] better for the Palestinian people and cause. And I have only one life.”

According to Baraka, the “siege” on Gaza’s intellect, much like the siege on its borders, has multiple sources.

“In our universities, we have no one from outside Gaza. We should be having exchange programmes with different universities, and bring in people with different perspectives,” he said, noting that students from as far away as India have expressed interest in working in his research lab. They have been unable to travel to Gaza, however, as it can be accessed only by humanitarian workers, journalists and Palestinians via a maze of special permits issued by Israeli and local authorities.

Al-Aqsa University has also witnessed a drop in its student numbers this year, amid a dispute between authorities in Gaza and Ramallah over the university’s management.

Some 25 employees have had their salaries suspended, while at least 20 were arbitrarily suspended or transferred. The education ministry announced that students’ certificates from Al-Aqsa may not be accredited, leading to a sharp drop in the number of students enrolling, from an average of 3,000 to 4,000 to just 500 this year.

And while Israel’s last war on Gaza in 2014 took a massive toll on the territory’s collective psyche, Baraka remains among those who still believe there are better days to come. 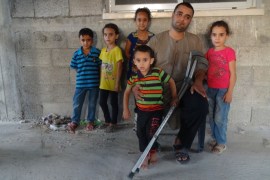 The long road to rebuilding Gaza

More than two years after the 2014 war, displaced citizens are still struggling to survive.