Johannesburg, South Africa – In the shadow of an underpass, wearing a black bob wig, Tlaleng paces along her patch of Nugget Street, scanning the downtown Johannesburg traffic.

Behind her, other women lead clients behind the crumbling walls of a gutted building in the brisk morning light. But Tlaleng, a boiled egg in one palm, is distracted, her eyes roaming a nearby post plastered with adverts for cheap abortions and penis enlargements.

Up since dawn, she is eager to finish her shift. She plans to head to a nearby clinic that is offering a miracle that afternoon: a pill that protects against HIV.

The 27-year-old mother of two came to South Africa’s economic hub with dreams of becoming a clothes designer. Until then, selling sex keeps a roof over her head.

“I don’t compromise,” she says bluntly when it comes to using condoms. “I want to get money to buy my sewing machine before I get sick – then get out. I want to make a living for my kids.”

But along the “stroll”, many have been raped or forced into unprotected sex. A recent study estimated that more than 70 percent of female sex workers in Johannesburg are HIV-positive.

Last June, as part the South African National Sex Worker HIV Plan launched in 2016, the country became one of the first in the world to provide PrEP, a prophylaxis pill that protects against HIV, free of charge to sex workers.

Peer educators, who are current or former sex workers engaged in outreach work, had visited Tlaleng on the stroll and told her about the new drug.

These peer educators are the “backbone” of the HIV plan. The three-year initiative promises to reach 70,000 sex workers through 1,000 peer educators from across South Africa, aiming to reduce HIV and improve access to testing and treatment.

Young women aged 15-24 are at such disproportionate risk of contracting HIV that the government launched a separate three-year plan last year to try to reduce infection rates. There are plans to expand young women’s public access to PrEP, with information sessions already being held in schools.

With one of the highest rates of HIV in the world – at 19.2 percent among 15 to 49-year-olds, according to the UN Aids agency – more than seven million South Africans are infected with the virus.

South Africa’s national strategy for tackling HIV is radical compared with other nations. With their demand of “nothing for us without us”, sex worker-led organisations such as the Sex Worker Education and Advocacy Taskforce directly helped to draft the plan.

“Whatever statutes are on our law books … we cannot deny the human and unalienable rights of people who engage in sex work,” South Africa’s deputy president, Cyril Ramaphosa, stated at the launch of the plan last March. “Sex work is essentially work.”

The plan demands that the Department of Justice secure a commitment to decriminalisation and also that the South African Police Service end the practice of using condoms or HIV medication as evidence of sex work and grounds for arrest.

As South Africa hosted the International Aids Summit last summer, amid heckling from sex worker rights activists, Deputy Minister of Justice John Jeffery stated that only 241 criminal cases had been filed against sex workers in the past three years.

“[Prostitution is] currently illegal,” Jeffery told Al Jazeera, however, “that’s not restricting government from embarking on plans to assist sex workers, particularly with preventing the spread of HIV and Aids.”

Last year, the South African Law Reform Commission completed a long-awaited investigation into the decriminalisation of prostitution, but the government is waiting to decide on an official position before releasing the report.

Since 2014, the World Health Organization, UNAIDS and Amnesty International have declared support for the decriminalisation of sex work, to improve access to human rights, healthcare and reduce the risk of HIV, with reports from The Lancet medical journal suggesting that decriminalisation would have the greatest effect on HIV epidemics, averting 33-46 percent of infections over the next decade.

In downtown Johannesburg, a clinic run by the Wits Reproductive Health and HIV Institute provides dedicated care for sex workers. Peer educators operate mobile health clinics to reach those on the streets, turning rented rooms in nearby brothels into impromptu testing spots.

More than 100 people selling sex in Johannesburg sat on plastic chairs in the clinic’s waiting area as peer educators explained how PrEP worked: Similar to birth control, the pill, taken every day, could give protection against the virus.

While the clinic treats and employs sex workers, the United States President’s Emergency Plan for Aids Relief is a major funder and demands an anti-prostitution pledge. Deemed unconstitutional in the US owing to its infringement on free speech and no longer applied to US-based organisations, the pledge still stands as a condition for international beneficiaries.

“We are unable to advocate for decriminalisation,” executive director Francois Venter says, though police harassment is the biggest challenge sex workers report at the clinic.

The clinic has had some success with sensitisation programmes, working with local police commanders, but “the police issue is a constant challenge,” according to Venter.

“Criminalisation is a bigger issue, but no one actually wants to speak out about this,” says Katlego Rasebitse, a spokesperson for Sisonke, the National Sex Worker Movement of South Africa.

“Even if she gets beaten by the police, I’ll just make sure her vagina is safe; she’s been raped, I’ll make sure she gets [treatment],” Rasebitse mocks the limits of the national plan. “You want to see me healthy, but my basic human rights aren’t protected.”

“We’re pretty confident regarding [PrEP] adherence,” adds Venter, “if the police behave themselves.”

Shaun Bibi, a paralegal and outreach worker with the Women’s Legal Centre’s sex worker project in Johannesburg, hands out “know-your-rights” leaflets, with the number for their 24-hour helpline to women along Nugget Street. She advises Tlaleng to report the licence plates of police who demand bribes, both money and sexual favours, to avoid criminal charges. A transgender woman and sex worker herself, Bibi speaks from experience.

The Minister of Health, Aaron Motsoaledi, told Al Jazeera that decriminalisation was not necessary to providing equal healthcare to sex workers.

With big hoop earrings, Wendy sits boss-like on a backless office chair on Nugget. When Tlaleng was arrested some weeks before, Wendy went to the station, paid the bribe and demanded her release.

“What is our government doing?” she had cried, smelling alcohol on the police officer’s breath. “You people, you’re not working!”

On a corner near Nugget, in the biting cold, a mother of three waits for clients. Nearly 50, she stands barelegged in a lurid mesh skirt and old grey jumper.

She has sold sex for eight years. A week earlier, a client had taken her in his car and forced her to have unprotected sex. She speaks about the rape as if discussing bad weather.

In the past, police have beaten her, demanded sex and jailed her for nearly a month without charge. Some clients, after bribing police to avoid arrest, come back seeking revenge. She says a woman was recently murdered by a client when she was thrown from a speeding car.

“With criminalisation, clients take advantage,” says Miriam, who is HIV-positive. “They can rape you; they can [have sex with] you without a condom.”

MAGAZINE: Stories from the sex trade

After the assault, Miriam says she went to the clinic to be treated, but never reported it to the police.

Captain William Mathusane, a legal adviser with the South African Police Service, said he was not aware of specific allegations of harassment or bribery of sex workers.

“I’m guessing the sex workers are alleging they are being terrorised or abused by the police,” he says. “Each and every citizen in South Africa, if you feel you are being victimised, [has] the right to go to the nearest police station and report such illegal conduct.”

When it comes to decriminalisation, Mathusane believes that’s an issue for the justice department, not the police.

Jeffery, the deputy justice minister, also stressed that sex workers have the right to report harassment to the Independent Police Investigative Directorate, who investigate criminal cases committed by police, but few feel they have that recourse.

“Where can I report it?” asks Miriam, throwing her hands up. “The police, they will say f*** off, you are makosha [prostitute]. They don’t care about us.”

Miriam lives with her son in a rough suburb. Because her work is criminalised, she says she cannot rely on any pensioner’s support.

“I like to work, but I’m not finding another job,” she says. “My son has to go to school; he can’t stay on the street.”

READ MORE: Prostitution is more than a labour rights issue

In the suburb of Rosettenville, dominated by pimps, police are known to chase sex workers with pepper spray. One woman said she was made to bend over while police pepper-sprayed her genitals.

Sitting on a lumpy bed, with a TV buzzing and a hot plate left on for warmth, 24-year-old Precious describes how a police officer recently forced his way into the house and beat her, while naked, as her client was leaving.

Zaza came from a rural town to make money for her young son, but her pimp got her hooked on crack. Now the work only feeds her addiction. The same week, Precious was beaten, Zaza was pepper-sprayed in the face and forced into a police van.

“They push me rough inside the komba komba [police van], take us to the station,” she explains. “They say [pay] 10 rand [$0.70] if I want to get out because you are doing business in this area of mine.”

Police then started hassling clients outside the house, refusing entry and demanding bribes. Precious says criminalisation makes it impossible to get out from under pimps, who offer a semblance of protection.

“We could leave these [pimps] and work on our own, that’s the only thing that’s keeping us with them,” she says. “We could do our own business, not giving anyone else a thing.”

In August, she started taking PrEP, provided free through a mobile health clinic. One pill each day means one less fear hanging over her.

Their rent is due soon. Clients pay more for unprotected sex, but Precious is strict about condoms: “I don’t play that game. My life comes first.”

Caelainn Hogan reported from South Africa through a fellowship with the International Reporting Project. 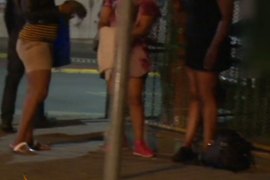 Rights groups want change in the law to give country’s sex workers – 60 percent of whom are HIV positive – more rights. 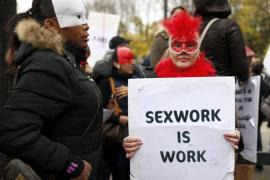 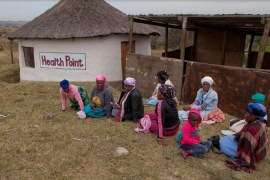 The country with the highest number of HIV/AIDS patients struggles to provide medication to its most remote areas.