Antarctica – It is the harshest, coldest and windiest continent on Earth. No journey there is ever uneventful.

It comes as no surprise then that the day after I set sail from Hobart, Australia, for a month on-board the research ship Akademik Treshnikov, a fierce storm forces us to change course.

Winds up to 100km/h and waves up to 15m high are forecast, so many of the 55 climate scientists on board start securing their experiment and re-checking the bolts holding their hardware on to the deck of the 133m-long vessel.

Among them is a team which plans to drive a robotic submarine under the Antarctic ice shelf.

Damage to their equipment would threaten their mission, and jeopardise one of the expedition’s main science projects.

I’d been invited to join the second leg of the expedition which has been organised by the newly formed Swiss Polar Institute.

It chartered the Russian research vessel to circumnavigate Antarctica, conducting 22 science research projects along the way.

The ship has already sailed from Cape Town to Hobart, via four sub-Antarctic islands. I joined it for the following leg, a voyage down to the Antarctic ice shelf itself, after which we will sail around the continent and north to Punta Arenas in Chile.

In the hours before the storm arrived, we are treated to a warm sunny evening in the southern Tasman Sea.

Albatross and petrel fly around the ship as it stops mid-ocean to allow the scientists to take water samples, dropping a large rosette of bottles to a depth of 1,000m.

Opening them in sequence to take samples at different depths, they are trying to improve their understanding of the ocean’s processes and how its vast population of phytoplankton are responding to changes in the climate.

Scientists know that Antarctica plays a vital role in regulating ocean currents and the complex marine food chain that they sustain. But they are concerned that, along with the Arctic, Antarctica is heating up faster than any other parts of the planet, giving urgency to the need to better understand what is happening.

We wake up the next morning to heavy seas and strong cold wind. And then the rolling begins.

The Russian crew adjusts course and speed to minimise the impact of the great walls of water that sweep in from the west, nudging and tipping the 12,000-tonne vessel. As the winds pick up, access to the ship’s front decks is closed.

But hoping to attach a GoPro camera to the top deck, above the bridge, I fight my way through the wind and rain, and up six flights of metal stairs. The view from the top is astounding: mountainous white-capped waves line up as far as the eye can see, disappearing in the dark sky.

The wind simply howls. Its force buffets me as I clamp a camera to the rail. The ship’s bow drives into the waves, sending great clouds of spray up and over the vessel. I had brought another camera with me, and wrestle with the wind just to hold it firm enough to be able to record what was happening.

The Southern Ocean puts on an impressive and wild display, a reminder of the raw power of nature in this part of the world.

Things calm down the next day. Except for a flooded lab, the storm caused little damage.

It did force us further west than had been planned and delayed our journey to Macquarie Island. As a result, it was decided to head directly down to the ice – the Mertz Glacier in East Antarctica.

It’s a four-day sail, so with improved conditions, the ship increases speed.

In the coming hours, we will pass through the Polar front, the area where Antarctica’s cold waters well up and push back the warm waters from the north, creating a barrier that is believed to help keep the continent cold.

In the space of a few foggy kilometres, the ocean temperature drops to just 4C. The Polar front is considered to be the point at which we will truly be entering Antarctic waters. At that point, we will be subject to the continent’s extreme weather.

It is here that the real expedition begins. 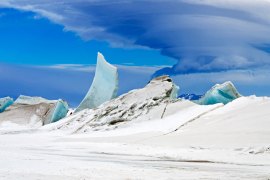 Warmer waters surrounding the ice-covered continent are having a dramatic effect, according to a new study.