Islamabad, Pakistan – On the afternoon of January 7, Ahmed Raza Naseer was sitting with his brother at their shop in a small village just outside the central Pakistani town of Nankana Sahib, when a nondescript man holding a mobile phone to his ear walked in.

He spent some time looking at their wares – mobile phones, mostly – before asking the brothers their names. After they answered, he asked which of them used a particular mobile phone number.

When Ahmed replied that he did, he was told to stand up. The 27-year-old struggled to his feet – he has been afflicted with polio in his right leg since he was a boy.

“The man tells him to take his phone and come and sit in the car outside, where a sahab [important man] is sitting who wants to ask you some questions,” his younger brother Tahir, who was ordered to stay inside, told Al Jazeera.

That was the last time his family saw Ahmed.

Naseer was the fourth person to disappear within a matter of days across Pakistan’s Punjab province. On January 4, Waqas Goraya, a Netherlands-based student, and Asim Saeed, a Singapore-based IT manager, were abducted in the eastern city of Lahore. On January 6, Salman Haider, a poet, activist and lecturer was abducted near his home in the capital, Islamabad. On January 7, activist Samar Abbas went missing while on a visit to the capital, too, bringing the total to five.

Abbas and Haider were known for their activism, espousing progressive and leftist positions in critiquing the Pakistani state and its powerful military, which has ruled Pakistan for more than half of its 69-year history and continues to dominate governance.

Haider, in particular, was known for his activism for “missing persons”, the moniker given to victims of a campaign of enforced disappearances often used by Pakistan’s intelligence agencies in its war against ethnic Baloch nationalists and others, including the Pakistani Taliban .

OPINION: Forced disappearances will not silence us

The issue of enforced disappearances is not new for Pakistan. Rights activists allege that there are thousands of people who have been “disappeared” by the state, with some allegedly killed while in custody. In December, the government’s Commission on Enforced Disappearances reported that the dead bodies of 936 missing persons had been found in Balochistan province alone since 2011.

The government denies any wrongdoing, and, in the case of the five activists currently missing, the interior ministry says it is “making every possible effort for [their] safe recovery”, according to a statement.

Now, however, these activists and citizens, as well as those calling for their release, face an even greater danger: They are being accused of blasphemy – a crime that carries a judicial death sentence and, increasingly commonly, the threat of extrajudicial murder by right-wing vigilantes.

“These [Facebook] pages … are extremely insulting to the Prophet, the Quran, Allah and Islam. They have made a joke out of this,” said Abdullah Cheema, a guest on a popular television news show on January 12. Cheema accused Goraya of running the Facebook pages in question, a charge denied by the activist’s family.

“Speaking in support of such criminals is a crime in itself,” said Cheema, while being encouraged by Orya Maqbool Jan, the show’s host and a well-known newspaper columnist.

“These blasphemers who they have captured, whoever has captured them, may Allah bless those people,” said Khadim Hussain Rizvi, a well-known Muslim leader in a sermon uploaded to YouTube on Jan 13.

“The bloggers’ disappearance is its own issue. They should definitely be produced, but no one should try and hide their crimes, and their crimes are so heinous that no one should … say that they suffered injustice,” said Aamir Liaquat, one of Pakistan’s most well-known talk show hosts on January 16.

Meanwhile, Facebook pages known for posting material in favour of the Pakistani military and intelligence agencies have also taken up the cry.

“The group of atheists committing blasphemy on Facebook … have been defeated,” said a recent post by Pakistan Defence, a pro-military Facebook page that has 7.5 million likes and is run by anonymous administrators.

Insulting Islam’s prophet carries the death sentence in Pakistan, while defiling the Quran carries a life sentence. Blasphemy accusations have often been used to target minorities and to settle personal scores, rights groups say. Currently, there are 40 people on death row or serving life sentences for the crime in Pakistan, according to the United States Commission on International Religious Freedom.

More worryingly, at least 68 people linked to blasphemy accusations have been killed by vigilantes or mobs since 1990, according a tally maintained by Al Jazeera. They have included those accused of blasphemy, their lawyers, their relatives, judges hearing their cases and members of their communities (PDF).

“Anyone even accused of blasphemy practically carries a death sentence even if they are [released],” says Zohra Yusuf, chairperson of the Human Rights Commission of Pakistan (HRCP), expressing her organisation’s “alarm” at the accusations being levelled at both the disappeared and those campaigning for their release.

Gul Bukhari, a Lahore-based rights activist, sees the campaign of accusations as aimed at silencing the campaign for the five men to be recovered.

“People are beginning to see a pattern. That when you can’t bring formal charges and you disappear people, and when there is outcry over this, they attempt to silence that by activating the blasphemy brigade,” she told Al Jazeera.

Shahzad Ahmed, whose internet rights group Bytes for All works on censorship and freedom of expression in Pakistan and has examined such campaigns before, characterises the current slew of online blasphemy allegations as both “coordinated” and “structured”.

“There are some [Facebook] pages who are spearheading it, creating memes, sharing photos, and those are then spread. And some make their way to mainstream media. So this is very coordinated, or you can say that it is structured.”

For the families of those disappeared, all of whom categorically deny the allegations, the message is clear.

“This is being done to dissuade people from supporting him and to agitate people against him,” says Talat Saeed, the wife of Asim Saeed, one of those abducted from Lahore.

“Such elements are trying to paint our missing family members as anti-state and anti-religion and inciting people to commit violence against them and our families,” reads a statement from the relatives of Goraya and Haider, issued on Wednesday.

And the attacks have already begun. At a rally in the southern city of Karachi on Thursday, right-wing religious leaders hurled rocks at a peaceful protest calling for the release of the activists.

“I swear to Allah, as long as there is a Sunni Muslim who holds Mumtaz Qadri’s ideology in Pakistan, we will not let those who disrespect the Prophet live!” yelled one religious leader at that rally, referring to a man venerated by many for killing Pakistani politician Salman Taseer in 2011 over blasphemy allegations.

The implications at play – of both the disappearances and the subsequent campaign to accuse them of blasphemy – are chilling, say Pakistani activists.

“This is extremely disturbing because they have now entered the digital world, and obviously social media, in particular, has more open space for people to express themselves,” says Yusuf of HRCP.

“The message is being sent that any criticism of either the military or those linked with the military will not be tolerated.”

With the stakes so high, few activists will dare stick their necks out, out of fear for their lives, says Mahvish Ahmad, a journalist and founder of the magazine Tanqeed.

“Disappearances of people mean the disappearance of voices – and of an alternate, dissenting political dream for what Pakistan can be. They only have to pick up a handful of people, as they’ve done now, to scare and silence us all.”

For others, the government inaction on locating the disappeared has given those responsible the ability to act with impunity.

“The government appears either unable or unwilling to find them, and its gross incompetence is likely to result in a chilling effect on the freedom to express dissenting views in Pakistan. That space was never very large; it is now definitely endangered,” says Madiha Tahir, a New York-based academic and journalist.

For the families of the disappeared, meanwhile, questions of shrinking space in the public sphere are academic. The ordeal of simply not knowing where their relatives are, what condition they are in, or indeed whether they are still alive, is all that matters.

“I have many questions right now, and no answers,” says Tahir Naseer. “I hope that [my brother] is returned soon, so that I can ask him myself. So that I can at least know what the whole issue here was.” 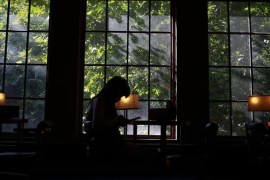 The Stream takes a look at online harassment in Pakistan and how women are fighting back. 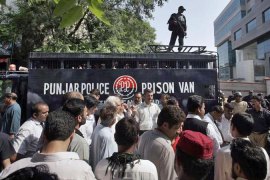