The job of the US president comes with the title “commander-in-chief”. Many regard that as the most important role.

On Wednesday night, on board a former aircraft carrier which is now a museum, we saw the first joint forum of the US presidential election campaign.

And suitably for the venue, it concentrated on foreign policy and military matters.

There was not to be a head-to-head. That confrontation between Hillary Clinton and Donald Trump will come in the first presidential debate later this month.

Instead, the candidates followed each other on to the stage, with 30 minutes allocated to cover important global questions.

First up was Clinton. The Democrat faced questions about her use of a private e-mail server, her support for the war in Iraq and the allegations from her opponent that her policies while secretary of state have left the Middle East in a mess.

If she had hoped the e-mail scandal would have blown itself out by now, she was wrong. And she’ll have to sharpen her answers before the first debate.

In fact, she spent so long answering questions on the e-mail scandal that when she tried to address the details of the Iran nuclear deal, she was hurried by the moderator.

She also made the bizarre statement that “no Americans died” in the turmoil in Libya.

Four Americans died in an attack on the US consulate in Benghazi four years ago this week, an event which still casts a long shadow over her time at the state department.

Clinton also acknowledged that her support for the war in Iraq – she was serving the Senate at the time – was “a mistake”.

Trump, Clinton’s Republican rival, sent social media ablaze when it came to the war in Iraq.

He insisted he had opposed it from the very beginning – he didn’t.

In fact, he gave a radio interview where he expressed, albeit lukewarmly, support for an impending invasion.

And even though numerous fact-check organisations have pointed this out, he continues to insist his judgment on the issue was impeccable.

Trump insisted his business experience had prepared him to be commander-in-chief because he’d done deals all over the world.

Throughout the campaign, Trump has insisted he had a secret plan to beat ISIL and that he knew more about the armed group than the generals. That message has changed just in the past few days.

Now he will ask the generals to take the first 30 days he’s in office to draw up a comprehensive plan to defeat ISIL – even though he suggested he might demand new generals as he’s unimpressed by the record of the current incumbents.

Trump now receives intelligence briefings. And he insisted that Obama is not following what he’s being told by the experts.

Given that the briefers do not give policy advice but simply lay out the facts, Trump said he divined the problem because, “I’m pretty good with body language, I could tell they were not happy.”

Predictably, both sides left the USS Intrepid claiming they had won the evening.

What it did show is that the candidates have a lot of homework to do before the first presidential debate.

That will draw huge audiences, will be 90 minutes with no breaks, and a lot less forgiving.

The tension between the two candidates was palpable and they weren’t even on stage together.

The stakes couldn’t be higher on September 26, for the campaigns – and the country. 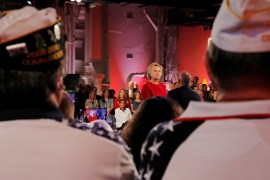 Both candidates came under fire for their past actions and future plans at the Commander-in-Chief forum.