A forceful cry breaks from her lips as she spreads her arms wide open. The words come out in Greek, but her grief can be felt in all languages.

“Just one day was enough to lose everything,” she says, dressed entirely in plain mourning black.

“Respect me,” she wails, before falling to her knees to touch the centuries-old earth.

This is Despoina Bebedeli, the renowned actress who starred over the weekend in Hecuba: A Refugee, the first play to be performed in an ancient theatre on the uninhabited Greek island of Delos in more than 2,100 years.

The play, which is based on two monologues written by Athenian tragedian Euripides, tells the tale of Hecuba, the queen of fallen Troy who, as a captive, mourns the loss of her husband and children during the Trojan War.

Over the centuries, this tragic heroine of Greek mythology has become an anti-war icon whose suffering lays bare all the horrors caused by conflict.

“In this theatre, this forgotten monument, where no theatrical speech had been heard for thousands of years, we decided to stage the absolutely timely story of Hecuba,” said Dimitris Athanasoulis, director of the department of antiquities of the Cyclades – a group of islands in the Aegean Sea – which co-produced the play.

“Our goal was to highlight the grave problem that affects all of us here in the eastern Mediterranean Sea: the plight of war and being a refugee,” he told Al Jazeera.

Organisers said they chose Delos, situated in the heart of the Aegean, to raise awareness about the drama of refugees risking everything to reach Europe’s shores.

Millions of people fleeing poverty, war and repression in the Middle East, Asia and Africa have tried crossing the Aegean in recent years. Thousands have died undertaking the perilous journey.

“Last year, we experienced all these intense and horrific events; children drowning in our sea,” Nikos Karageorgos, the play’s director, told Al Jazeera.

“My thoughts are with people who lose everything. How can they adapt in this new situation? It’s something unbearable; all these people who’ve lost children or relatives in the Aegean Sea, and are now somewhere in Europe. Will they be able to live a normal life again?”

Describing Hecuba as “a symbol of a woman, of a human, who loses everything instantly”, Karageorgos said her story explored how people can adapt to abrupt changes.

“Syrians are experiencing this now. Other people around the world, too. Greeks also in the past. How can you manage this, having to find refuge on an outdoors bench in a foreign city? Having left behind a life where you had a family, where you could support yourself and now, all of a sudden, you are left without a home and a country.”

Known as “the most sacred of all islands”, Delos is the birthplace of Apollo, the god of daylight, and his twin sister, Artemis, the goddess of moonlight, according to Greek mythology.

This small rugged island was first settled in the third millennium BC, and by the third century BC it had become a prosperous and cosmopolitan centre of cultural, commercial and political life in the region.

Its imposing ancient theatre, regarded as one of the most important artistic creations of its time, was built entirely from marble in the third century BC. With a 6,500-strong capacity, it hosted major theatrical productions, dances and other cultural events.

But the prominence of the theatre – and of the island – came to an abrupt end in 88BC when Mithridates, the king of Pontus, attacked and sacked Delos. Looted again by pirates in 69BC, the island quickly fell into decline and was gradually abandoned.

Currently largely uninhabited, the entire island is an archaeological site; no settlements have been built over the ancient marble ruins, which attract more than 100,000 visitors each year.

Since the ancient theatre cannot today welcome large numbers, organisers said a total of some 300 people were invited to watch the stripped-down play, performed on Saturday and Sunday morning without sets or props, lighting or sound system.

But the lack of technical support only added to the mesmerising experience.

“The location also played a huge part,” Karageorgos said. “Delos is a special place, it has an absolute stillness and quietness,” he added.

“You have to take a boat to get there, and to reach the theatre you have to go up a path surrounded by all these ancient marbles.”

Hecuba: A Refugee opened with an actress reading the words of an Austria-based Syrian woman, who last year wrote a poignant letter to the United Nations describing the plight of people fleeing war.

“I wonder, if the European countries truly wanted to welcome us, why don’t they do it legally, through their embassies? Has the whole world gone blind and not seeing what is happening?” the woman wrote in the letter.

In a symbolic gesture, the actress who read the excerpt from the letter remained close to the stage throughout the performance, watching Hecuba’s drama unfold in front of her eyes.

“It was something overwhelming,” Karageorgos said. “The spectators, men and women, were crying from the first minute of the performance until the last.”

“All the viewers left overcome with emotions,” he said.

“We believe that such monuments and the ancient Greek literature can transmit messages that are relevant to humanity today – one of which is Hecuba’s anti-war cry.” 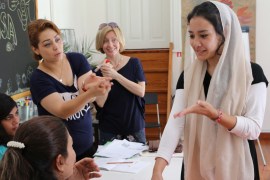 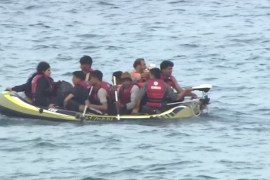 Risking everything to make it to Europe

Every day families try to make the dangerous crossing from Turkey to Greece, undeterred by frustrating experiences.