Hong Kong – On February 8, 2016, the first day of the Chinese Lunar New Year, violent clashes between police and young protesters erupted in the city of Hong Kong, with surprising aggression and subsequent injuries on both sides.

It was triggered by authorities attempting to close unlicensed street food stalls, a traditional part of the city’s New Year celebrations. With tensions high around what many see as attacks on local identity since the 1997 handover back to China, many youths gathered “to defend Hong Kong culture”.

IN PICTURES: Hong Kong through the eyes of rooftop rebels

Not since the peaceful mass protests of the pro-democracy Umbrella Movement of 2014 had so many young people gathered to make a stand, but two years of mounting frustrations meant that when the clashes began, the notoriously well-behaved local youths were now willing to fight back.

What ensued was a crackdown on the young: CCTV in wide operation, weeks of arrests, undercover operatives and heavy police patrols. The authorities then increasingly focused on politically-active student groups and the youth-led “localist” parties – groups who call for Hong Kong people’s interests to be put first and the territory’s autonomy and for distinct cultural identity to be defended against Beijing’s influence.

As the city heads to the polls to elect Hong Kong’s Legislative Council, or LegCo, rifts within the pro-democratic camp are symptomatic of growing discord about how best to counter the strength of the pro-government candidates, many of whom are seen as conduits for mainland China’s political interference.

High above the struggles below, I focused my film on one element of this youth discontent: Hong Kong’s thrill-seeking rooftoppers; Airin and her friends, young urban explorers who elude security to climb the city’s vertical skyscrapers.

Rooftopping and urban exploring is the exploration of any open or abandoned space. In this dense vertical city of over seven million, spaces hidden in the famous skyline are often the only ones left to explore.

For rooftoppers worldwide, conquering buildings and breaking the rules is part of the sport, but for these friends in Hong Kong, defying the authorities is informed by a deeper rebellion.

Sharing videos and photos of their jaw-dropping adventures has already made them internet stars, but also allowed them to use their fame to make political statements.

Airin’s past images have gone viral, like one of her “rooftopping” above Umbrella Movement protesters, wearing a Guy Fawkes mask and waving a colonial flag – a statement of pride in Hong Kong’s distinct cultural identity.

Reclaiming the city from big business, big money and Beijing

Taking part in such a dramatic activity is also a rejection of traditional Hong Kong Chinese cultural expectations. Great emphasis in Hong Kong is placed on filial duties, studies, career and financial status, whereas rooftopping’s ethos is that of freedom and a rejection of commerciality, authority and ownership.

It is also one of the few things young people can do for free.

The cost of living in the city is among the highest in the world, and the near-impossibility of owning one’s own flat means that the majority of Hong Kong’s youth live with their parents well into adulthood – creating resentment towards this restriction and the difficulties of fulfilling a basic need for personal space.

Sneaking onto rooftops is a statement of reclaiming the city from big business, big money and Beijing.

These rooftoppers are informed by an energy which propels all of Hong Kong’s politically-awakened youth, from musicians to artists, filmmakers to activists.

The city’s young people are part of a generation who have grown up with the fight for democratic reform alongside worsening economic prospects and increasing worries of eroding civil liberties. For Hong Kong’s historically well-behaved teens, rooftoppers – like other young creatives – showcase their frustrations by celebrating disobedience.

Filming in the days which followed the February clashes, we climbed a tower in Mong Kok – one of the central protest areas – with Airin and others, and watched from the ledge as police vans crisscrossed the district below. The rooftoppers do not condone violence, but they are convinced that the old occupy tactics of the Umbrella Revolution will no longer work, and that more radical action is necessary.

Like many politically-awakened youth, their experiences from the Umbrella Movement and their distrust of the police have built to such a degree that even though they don’t plan to join protest events, they carry salt water and bike helmets in their backpacks in the belief that they could easily find themselves in the wrong place and be pepper-sprayed or threatened with batons.

There is genuine fear among Hong Kong’s young. In recent years, they have seen their economic prospects dampened and their sense of national identity changed, with TV, schools and even Pokémon characters switching from Cantonese to Mandarin.

They’ve been threatened with proposed legislation to make “sedition” more easily prosecutable, to limit online freedoms, and to insert “patriotic education” into the national curriculum to teach students about the love of the party and a history which glosses over the Tiananmen protests and the millions who starved under Mao.

A criticism that is being voiced is that Hong Kong is one of the world’s few societies which is moving backwards, heading towards even less freedom.

Insults of “So Communist!” are used against any heavy-handed government initiatives, and slogans like “Reclaim Hong Kong” or “We Are Hong Kong” are appearing more and more, scrawled on walls, or in comments on social media. Distrust in the media is at an all-time high, with most local youth now looking for news on social media and new online channels.

The Umbrella Movement managed to mobilise over 100,000 young people, but the Hong Kong government failed to engage with people, made no concessions and many youth leaders were taken to court. Numerous incidents of alleged police brutality against protesters have been widely circulated online and galvanised many more into action. All of this has led to the increased popularity for more “radical” politics.

There were signs of heightened emotions before the clashes of this year.

A film titled “Ten Years” was released in late 2015, featuring five dystopian visions of Hong Kong’s future – visions of a city where officials operate like gangsters, the word “local” is banned, taxi drivers get into trouble for speaking Cantonese, brainwashed Red Guard youths report on their parents and people self-immolate in front of the British Embassy in a cry for help.

The film was banned on the mainland and labelled a “thought virus” by one pro-Beijing newspaper, but was so popular in Hong Kong it out-performed Star Wars in the cinema in which it was released and went on to win “Best Film” at the Hong Kong Film Awards. There were reports of cinema-goers so moved, they were crying in the cinema.

Currently, the government has raised more concern in their attempts to control the anti-establishment wave, banning notable localist candidates from standing in the September 4, 2016 LegCo elections, prompting criticisms of political censorship.

Localist and pro-democracy political leaflets have also been censored, with those parties then releasing tongue-in-cheek leaflets, with stars and moons covering banned words or with statements such as: “My political views are_________.”

Attempts to reign in youth parties seem to only give rise to more fears. A self-perpetuating cycle of government inflexibility and badly-executed controls is creating more fear about diminishing freedoms and is seen as proof of Beijing influence – all the while, drawing more to rebellion.

In Mong Kok, one older activist described what he believed to be the difference between the 2014 protests and the events of 2016: When police fired gas canisters at Umbrella protesters, he said, most young people fled or helped friends escape the area. But in 2016, when word got out that police were moving in with gas and riot gear, defiant youths from all groups and affiliations deliberately came into the battle, willing to be hurt and risk up to 10 years in jail.

As rooftopper and photographer Ben says in our film, Hong Kong’s Rooftop Rebels, we need to ask ourselves: What is so wrong in our society that young people feel compelled to take these risks? With ongoing questions surrounding the banning of localist candidates and allegations of the intimidation of pro-democratic candidates, the results of the LegCo elections are unlikely to ease the divides. 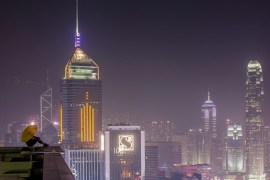 Three friends sneak up the city’s towering skyscrapers in an act of rebellion against the establishment. 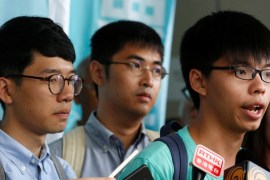