Chios, Greece – Months after arriving on Chios, Rusde Endris has become fearful. The Syrian man was recently taking an evening walk with his 18-year-old wife on a patch of green across the street from town hall. He says two Greek men approached them and tried to remove her headscarf.

“They had drunk wine. They were talking in Greek. One was a big, tall man. I only wanted to protect my wife,” he says showing knife cuts on his back from the attack.

“One of the men punched her in the eye. She was pregnant and she lost the baby after this,” he says showing a photograph of a Greek hospital report on his mobile phone.

The report, stated that one Fatme Endris had had a miscarriage. “I went to the police but the police here did nothing because it was Greeks who did this.”

Six months since the European Union-Turkey agreement curbed newly arriving refugees on Greece’s eastern Aegean islands, sentiment is beginning to turn against them.

Earlier this month a young Syrian man who calls himself Ali Ali was caught on the wrong side of an anti-migrant demonstration – another recent phenomenon on the island.

“I was in the park with a friend. Some people hit me and the police arrived and separated us. One person threw a rock at my chest and someone else hit my foot with a stick,” he says, showing a bandaged right foot.

Outright violence is still rare, but some islanders are beginning to demand assimilation.

“I am Muslim. I cover my head. They don’t like this cover. Why?” asks Bushra Asheh, an English teacher whose husband was killed when a suicide bomber destroyed their house in Syria.

“When I went to the market, a woman said, ‘Why do you put this?'” pointing to her hijab. “‘It’s not beautiful.’ I said I am Muslim. She made a face like this,” says Asheh, making an unpleasant facial expression.

One of the factors turning islanders against refugees is a spate of petty crimes.

“Five months ago, two 15-year-old girls had their bags ripped off them just across the street. One of them was my goddaughter. It was 8pm. Why do this?” asks Yiorgos Pilioglou, a tyre repair man across the street from one of two tent cities that have sprung up in Chios town. “At some point things will take a bad turn … people are afraid.”

“The police can’t tell me not to go out after 10pm. I am not going to adjust to the migrants. They should adjust to me,” fumes Yiorgos Manaras, who runs a sweet shop nearby.

A few kilometres outside town, villages surrounding the Chios government-sponsored refugee camp complain of home break-ins, missing chickens and dug-up vegetables. The camp sits in and around a disused aluminium moulding plant known by its acronym, VIAL.

In the village of Vavyloi, Apostolos Kambouris says his brother surprised a burglar in his house. “He took a hundred dollar bill and his wife’s good earrings, then tried to escape by jumping out of the first storey window. We didn’t see the man but he was later caught because he broke his leg jumping. He turned out to be an Algerian.”

“You can’t explain to old people whose pension has been cut and who struggle to make co-payments for medicines why others who’ve just arrived on the island as refugees are being fed for free,” says a baker’s shop assistant who declined to be named.

“I understand that this comes from overseas humanitarian organisations but some people don’t. Some people here go hungry,” he says.

Greeks scrambled to feed and clothe refugees as they walked through the Balkans last year. Two events turned that flow into a standing population, altering refugee politics in Greece.

In February, Austria, Slovenia, Serbia and Croatia agreed to register refugees at the border Greece shares with former Yugoslav Macedonia. Overnight, Greece became a buffer zone between the Turkey and the rest of Europe, and its refugee numbers climbed.

The turning point in the frustrations of east Aegean islanders, however, was the EU-Turkey agreement a month later. Turkey would make an effort to restrain crossings and re-admit those caught on its territorial waters; but those who make it as far as Greek waters are no longer allowed on the Greek mainland, but are confined on the islands of Chios, Lesvos, Samos, Kos and Leros.

The idea was to quickly separate them for either deportation or asylum processing. Asylum applicants are allowed to travel to mainland Greece after their first interview. But both procedures face staffing shortages and progress at a slow pace. Since March, just 578 people have been returned to Turkey under the deal.

The result is that camps built for 7,500 people are already burdened with twice that many, so they are left unlocked, turning these entire islands into massive holding areas. Many have been there for six months.

The difficulty of waiting has caused three inter-ethnic eruptions in the camps.

Last April, about 500 Syrians fled VIAL claiming they were being harassed by Afghans. They occupied Chios’ main port, forcing ferries to dock at another port 40 kilometres away. The disruption to commerce and passenger traffic produced an angry mob which tried to intimidate the Syrians into leaving, prompting police to conduct a more orderly evacuation.

Last July, Pakistani inmates rioted at the processing centre on Leros, ransacking its offices. They had just been shipped in from Athens and assumed they were being deported back to Turkey. Islanders formed a posse to help police guard the camp, and forced volunteer organisations to evacuate.

“They said to us, ‘if you don’t go, you’ll be in trouble,'” says Catharina Kahane, who had worked on the island for months with her charity, Echo100Plus.

Last week, inter-ethnic tensions caused the largest riot to date at the Moria camp on Lesbos, which destroyed two thirds of it and left two thousand people without shelter.

Where is the EU?

The insecurity of islanders is metastasising into political opposition. The mayor of Chios, Manolis Vournous initially supported a government plan to spend 3.7m euros ($4.1m) building a second, large camp at a disused landfill site, which would enable him to shut down the two tent cities in town. He is now careful to accommodate those who want refugees off Chios altogether.

“Let’s say we find space for another thousand people. What will happen when you get a thousand and one?” Vournous says. “We haven’t seen the EU say, ‘I can see you’re under pressure, I can see you’re carrying a great burden on behalf of the EU, but I’m here to support you to recover as a society.'”

Vournous is indignant at the lack of EU support.

“I am carrying out its policy to prevent Germany, Italy, Austria, Hungary and Spain from flooding with people,” the mayor tells Al Jazeera. “And the EU isn’t even providing enough money for that; but I would also expect it to help me develop the economy, to show that we won’t always be a frontier post; but it has no wish to do this.”

The people of Chios are so frustrated with their role as European Union frontier, some are thinking of seceding.

During a five-hour session of the city council last week, one attendant suggested declaring Chios a city-state. Another suggested a referendum on whether refugees should be allowed to spend more than 72 hours on the island.

A vocal opposition now holds regular demonstrations demanding the closure of all refugee camps and the shipping of refugees to the Greek mainland.

Even the regional government is now against building more infrastructure. “Northern Aegean islands’ capacity for refugees is defined by the hotspots they now have,” says Christiana Kalogirou, North Aegean prefect. “The Aegean cannot by itself bear the burden of the problem.”

Kalogirou blames the European Asylum Support Office, EASO, which was meant to send hundreds of caseworkers to Greece following the deal with Turkey. So far it has sent a few dozen, of whom only 20 are on the islands.

“The fact that Europe hasn’t pursued this staffing as it should … has created the difficult conditions on the islands,” says Kalogirou. She estimates that 70 cases a day are added to a backlog now standing at 9,000.

EASO spokesman Jean-Pierre Schembri says his agency relies on the staff EU members volunteer. “On September 2, we issued a co-ordinated call for 100 staff to be deployed on the islands … We’re still far away from it. We’re still making repeated appeals.”

Europe is addressing a backlog of 1.1 million asylum applications from last year, and member states say caseworkers cannot be spared.

The lack of staff has led to an open quarrel over asylum process. German Chancellor Angela Merkel’s spokesman Stefan Seibert on Wednesday chastised Greece for being too slow to send rejected asylum applicants back to Turkey. But a Greek asylum official tells Al Jazeera that EASO is exclusively responsible for the first winnowing of refugees.

“Greece has no role in accepting or rejecting nominations,” says the official. “It is obvious that if experts do not have the requisite experience, the quality of their work will be poor and the procedure will be vulnerable to litigation and unfair to the asylum seekers.”

The official also says that asylum authorities are wary of deporting applicants because “No EU member state has recognised Turkey as a safe third country so far.”

The result of all these shortcomings is social tension on the islands.

Chios journalist Yiannis Stevis believes the far-right minority will make its presence increasingly felt, as legitimate authority fails to live up to its task. He believes the harassment of refugees who occupied the port in April was a watershed moment for Chios.

“It was a catalyst for the change in public opinion. It sanctioned the far-right elements to have a say in what will happen in the city. I don’t deny them their opinions, but they are a minority; they cannot determine developments, which is what they did that night.” 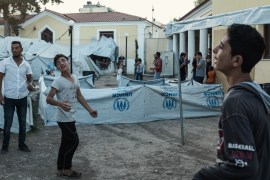 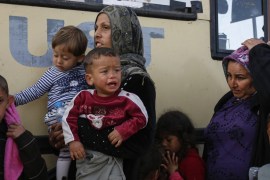