Harrisburg, Pennsylvania –  Along a country road in Lancaster, a county in south central Pennsylvania, a young boy dressed in a pale blue shirt, black suspenders and a broad straw hat draws his horse and cart towards the town centre.

Among the farmlands and barn houses, a blue and white sign stands out in the otherwise pastoral setting: Trump, Pence – Make America Great Again.

This is  Amish country,  and despite its remote setting, the community has become enveloped along with the rest of the country in the 2016 United States presidential election campaigns.

The Amish are a conservative Christian community living in a number of states across the US, with the largest communities based in Ohio and Pennsylvania. They have their own schools, churches, and they live without modern amenities including electricity and cars – all as a means of maintaining a sense of religious and spiritual purity.

They drive horse-drawn carts or “buggies”, dress in plain clothes, as decorations are considered immodest, and don’t watch television or use the internet – which means they have probably never seen an Instagram post by Democratic presidential nominee, Hillary Clinton, or a tweet by her Republican counterpart, Donald Trump.

Unsurprisingly, for many of the roughly 302,500  Amish people living in the US today, according to Kopko, voting in a national election is simply not a priority.

“I don’t vote; I’m just not interested,” says Sam, an Amish craftsman from Lancaster County. Like many in the community, Sam did not want to use his full name –  a common habit among the Amish, who shy away from public attention, particularly outside of their communities

Similarly, Freida, 18, who works at an ice cream shop in a neighbouring village, says that while she does have concerns about the next four years, ultimately, the election “is up to God”, which is why she won’t be voting.

“For them … that’s the outside world,” says Dave Dumeyer, chairman of Lancaster County’s Republican Committee. “They do get involved when there is significant interest generated around a campaign … or if there is an issue that may affect farming or small businesses, but the [Amish] don’t generally get involved in politics.”

As many aspects involved in electing a president conflict with the ideals of the Amish community, “they tend to shy away from elections”, Kopko told Al Jazeera.

“For national elections, which involve electing a commander in chief of the military – this is incompatible with their religious beliefs,” he says. The Amish believe in promoting a system of pacifism and nonviolence.

In the village of Bird in Hand, also in Lancaster County, outside a row of horse stables, Aaron and his colleagues, Melvin and Levi, discuss the election.

Melvin, 77, agreed: “I’m pretty sure Hillary would be a problem.”

Aaron has owned his buggy business since 1992, taking tourists on traditional horse and carriage rides through the village. He is one of a number of Amish who, while adhering to many of the cultural and religious traditions, want to grow their business outside of the community.

Aaron told Al Jazeera that as a businessman himself, he respects Trump’s experience. “If he can run businesses like that, then he can run the country. She [Clinton] doesn’t know anything about that.”

Levi, 55, expressed concerns about both candidates: “I only vote if there are good candidates. I voted for [George W] Bush, but I’m not sure I’ll vote this year. They both [Trump and Clinton] seem terrible.”

Aaron says that he is unsure how many Amish will vote come November. “On the one hand, they are more concerned than ever about the state of the nation,” he told Al Jazeera, but “they still have the teaching of the church, which says that they should not become involved in politics”.

Despite sharing some of Aaron’s concerns, Melvin says he won’t be voting. “I never have voted, and I never will. All we can do is just pray and hope for the best.”

However, there is one man who believes he can encourage more Amish to take part in the elections.  Ben King, 28, is the outreach director of the Amish PAC – the first ever political action committee created solely to garner Amish support for a presidential candidate.

According to a statement on the organisation’s website, the purpose of the committee “is to beat Hillary Clinton in 2016 by turning out a deeply conservative and often forgotten block of voters”.

King, who was raised Amish but left the church in 2014, says that he hopes to get “at least a couple of thousand” Trump votes from the  70,000 Amish living in Pennsylvania – a task made slightly easier as Amish voters have traditionally supported the Republican Party.

“They tend to favour conservative policies … and the Republican party has historically been viewed as more supportive of their way of life,” Kopko told Al Jazeera, adding that social issues such as abortion and concerns over same-sex marriage – which conflict with Amish beliefs – are key motivating factors for those who are considering voting in the national election.

While much of the 2016 campaign has been broadcast online, King says Amish PAC has been using more “traditional methods” of public relations.

Throughout the presidential campaign, Trump has caused controversy numerous times via his social media platforms – something of which Amish voters have been largely unaware.

READ MORE: Will Donald Trump win the US presidential election?

“It’s good and bad because they are not getting these constant Twitter feeds and Facebook messages,” says King. “They are for sure not hearing all the news … that we’re hearing about whatever comments Trump is making.”

Sally Lyall is the Democratic Committee Leader of Lancaster County. She has two bumper stickers on the back of her car, one reads: “Hillary for President” and the other says: “Women make great leaders; you’re following one” – signs that she says have caused her some grief in the heavily Republican County.

She told Al Jazeera that due to the lack of modern communication platforms, Amish voters are approaching the election “with very limited knowledge”.

“Since they don’t have televisions, I don’t know if they get a sense of how crude and crass Donald Trump is,” she says. “He uses the ‘F’ word and he’s so vulgar, I don’t think they would in any way identify with him, but if they don’t have a TV, they don’t see what we see.”

However, King asserted that even with online access, the Amish would still vote Trump:

“Honestly, [Trump] is pro-life, he’s pro-business and that’s a huge concern in the Amish community… [they] are not going to be making decisions based on a few tweets.”

Aaron agreed that as long as Trump’s key policies aligned with his beliefs, he was willing to overlook other things. “It’s not our business to tell him [Trump] what to do. Issues like abortion – which is murder – well that’s different, but this is not that.”

At a local farmers’ market in town, a large red sign reads: “Beiler’s Candyland,” where Melvin  Beiler and his wife Sarah are selling homemade chocolates.

“I don’t really follow politics, but what I gather from other people, it doesn’t sound good to me,” says Beiler, explaining that he probably won’t be voting. “Our theory is we just pray for the leadership. That’s as far as we go.”

“Well, we don’t vote, but we try to pray about it, for the right man, and I think everybody thinks ‘not a woman!’.”

While Sarah didn’t want to comment any further, Aaron says this view is unsurprising.

“Women among the Amish are not supposed to be ministers. Women are supposed to be submissive and give deference to the head of a household. Therefore, to have a woman president would not be acceptable,” he told Al Jazeera.

While Kopko affirmed that the Amish live in a patriarchal society and some may oppose the concept of a female president, this opposition is not likely to lead to further voter turnout.

“There is a difference between personal opposition to a female president and one’s willingness to go to the polls on election day to exercise that opposition,” he told Al Jazeera. “I doubt that Hillary Clinton’s candidacy in and of itself [as a female candidate] will motivate many Amish to vote in 2016.”

In a nearby supermarket – Sandy, a barefoot young Amish woman, wearing a white bonnet and apron was doing some shopping with her sisters.

“It’s not in our religion. We [Amish] just don’t vote,” she told Al Jazeera. Sandy is like many women in the community who have little engagement in public and civic life. Seemingly uncomfortable discussing politics, she said: “There’s a man in here if you’d like to speak with him and ask him questions.”

These votes could make a difference

On July 9, 2004, George W Bush, then Republican presidential candidate, rode his campaign bus through Lancaster to hold private meetings with members of the Amish community.

It was a year when both Pennsylvania and Ohio, home to roughly  half of the country’s Amish population would be key battlegrounds in determining the election between Bush and then-Democratic senator from Massachusetts, John Kerry.

At the time, the Republican Party scoured the country for unregistered groups who shared Bush’s “accent on traditional values”, according to a  study by Elizabethtown College. They targeted Evangelical Christians, anti-abortion rights advocates and, for the first time, the Amish –  a group they believed would support the campaign’s promotion of conservative social ideas. And they were right – George Bush received  1,300  Amish votes in Lancaster County alone.

Amish PAC is hoping it too can garner at least this many votes for Donald Trump come November, King told Al Jazeera.

“A couple thousand votes could make all the difference.” 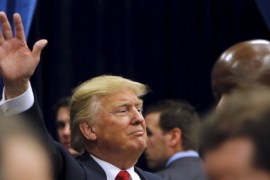 After a crushing victory in Nevada, Trump’s momentum may sweep away main challengers as Super Tuesday approaches.