Kolkata, India – As she ended her epic 16-year hunger strike last month in protest against alleged brutality and sweeping powers by India’s military in the country’s northeastern state of Manipur, Irom Sharmila announced her intention to run for office to carry on her struggle against the abuses.

Sitting on her bed at a Vaishnava monastery in the northeastern Indian state of Manipur, the 44-year-old rights activist, who had begun her hunger strike demanding the repeal of the controversial security law of Armed Forces (Special Powers) Act, or AFSPA (PDF), told Al Jazeera in an exclusive interview that many of her supporters are now unhappy with her decision.

“I pledged that I would not end my hunger strike until AFSPA was withdrawn … But I fasted for so long, and it failed to impact the government … I decided to change the course of my fight and join politics,” she said.

However, the human rights activist’s decision has come at a price, costing her much of the support of those who had stood by her side during her 16-year-long hunger strike.

Being confined to a hospital bed for so long, the woman who has become known as the Iron Lady of Manipur has indeed emerged to a thorny political scene, finding herself isolated and rebuked by the very supporters and fellow activists who once stood by her side.

“Many even wanted me to not end the hunger strike,” Sharmila said. However, she describes that what made her end her strike was the realisation for the need of a new strategy.

“While I was fasting, at one point, I began to realise that many of my co-activists were withdrawing their support, and I was left all alone in my fight,” she says.

Sharmila has evolved in her beliefs and now sees that political participation is what will bring change from inside the system.

“Through politics, I can attain power,” Sharmila told the local media last August, just after the tube used by the authorities to force-feed her through her nose was removed. “If I can win the elections, become the chief minister of Manipur, then I can get the AFSPA repealed using my political clout.”

According to human rights organisations, the AFSPA of 1958 has been in force purportedly to curb insurgency in areas like Kashmir and northeast India, including Manipur. The act gives troops sweeping powers to make arrests without warrants and even shoot suspected insurgents without fear of prosecution.

“Her latest decision to end the strike and contest elections is a change in strategy only, and the movement to repeal of the AFSPA will only get stronger now.”

There are a good number of people supporting Sharmila’s new political strategy, and they will be happy to see her as a powerful political leader, Nepram says.

“In Manipur, we still have 60 armed insurgent groups and 100,000 troops of Indian armed forces, and the martial law of AFSPA is still in place.

“We are ruled by men who control the state with guns, drugs and high corruption. Under this extremely violent situation, it will require proper strategising for Sharmila to plunge into the political arena in the state,” she says.

Repeated Al Jazeera attempts to solicit a response from Indian government representatives to these allegations of human rights violations were unsuccessful.

Earlier this month, several of Sharmila’s fellow activists and friends met her in the hospital to help her plan a strategy to connect with the people before going out on her political mission.

“Fasting Sharmila in the forefront of the anti-AFSPA fight helped mobilise the support of the masses successfully,” human rights activist Babloo Loitongbam, who has long worked with Sharmila as her associate, told Al Jazeera. “However, now that she wants to continue her fight against AFSPA as a politician, she badly needs the mass support.”

Loitongbam adds that Sharmila’s strategy should be to “go out and interact with the grassroots people to find out what they expect from her before she launches her career in politics”.

Sharmila told Al Jazeera she had regained her physical strength will start meeting people from different corners of the state this month.

However, Sharmila says that she would run in next year’s Manipur state elections in as an independent candidate.

She recognises the weight of her decision, and her goal is to go out and connect with locals around the state.

“I have to reach out to the people of Manipur. I have to spend a long time meeting the members from different communities across the state,” she says.

“In fact I have already begun traveling to different parts of the state to meet the people.”

Recognising the importance of gaining the people’s support in her new journey, Sharmila says she will need “their full-fledged support”.

“I cannot succeed in my goal unless they back me.”

Irom Sharmila, the “Iron Lady of Manipur” has said she is interested in running in India’s elections next year. 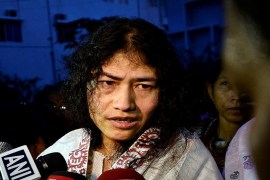 Who is India’s ‘Iron Lady’? 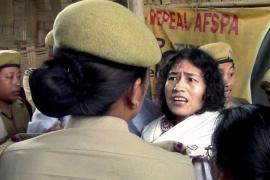