Surat Thani, Thailand – For many years, farmer Noppadol Tawee lived with the constant fear of waking up and finding all the shrimp that were growing in his pond floating dead in the water.

“The shrimp used to get sick, and I lost all of them several times. Some years, I could make a lot of money; in others, I could lose everything,” explains Noppadol, a shrimp farmer living in Kanchanadit, a district in the province of Surat Thani in Southern Thailand.

His neighbours advised him that the solution to his problem was related to a very specific kind of tree: the mangrove. Years ago, before shrimp production came to the region, mangroves had covered the coastline of the region, housing dozens of marine animals, including shrimp, small fish and crabs.

Mangroves are known (PDF) for purifying the waters and working as nurseries for a number of marine species, as well as being huge areas of carbon storage.

But, since the early 1970s, the Thai government promoted (PDF) semi-intensive and intensive shrimp production, which quickly spread to coastal areas, placing Thailand as the world’s third-largest exporter (PDF) of seafood and one of the main producers of shrimp in the world.

This rapid expansion came at the cost of thousands of hectares of mangroves, a complex and rich ecosystem comprising different species of trees and a high number of other plants, animals and micro-organisms that grow in coastal areas in tropical regions.

Noppadol’s followed the advice of his community and planted mangroves.

“Since I planted the mangroves in the pond, the shrimp have never died again,” says the farmer, who also stopped administering antibiotics and fertilisers to the water and stopped feeding the shrimp artificial food.

“They get everything they need from the mangroves,” he says.

Jim Enright, Asia coordinator at the Mangrove Action Project (MAP), an NGO that advocates for the recovery of mangrove forests, explained the significance of the mangrove in the area:

“We often refer to mangroves as the supermarket for the local people because, there, they have some building supplies, food supplies, shelter and medicines. So people have been traditionally relying on the mangroves for all those things in the local fishing communities,” Enright said.

According to data released by the World Resources Institute, the world lost between 9,000 and 25,000 hectares of mangroves each year between 2001 and 2012.

A report (PDF) from the Environmental Justice Foundation notes: “Evidence suggests that shrimp aquaculture has been a major contributor to global mangrove forest loss, and in a number of countries, it is considered to be the biggest threat to these ecosystems.” The report estimates that as much as 38 percent of recent mangrove loss may be due to shrimp farm development.

As in many other places in the world, the loss of biodiversity and the concentration of farms in Kanchanadit came at a high environmental cost, causing frequent disease outbreaks in the ponds, like the ones in which Noppadol’s shrimp used to suffer.

Intensive shrimp farms use antibiotics, fertilisers, disinfectants and pesticides that, in Thailand, are often released (PDF) into the natural streams of water without being treated beforehand.

“We were having many problems with the wastewater coming from the farms. The fish died and the fishermen couldn’t catch anything, and we couldn’t grow oysters any more,” said 53-year-old Preecha Danchulchai, a villager who owns an oyster farm a few metres offshore.

The Thai Department of Fisheries did not comment on the environmental regulations of the shrimp industry, claiming that the latest legislation regarding the sector, the Royal Ordinance on Fisheries BE 2558, approved at the end of 2015, was too recent. The department is now drafting a new ministerial regulation along with a notification to implement it, as the Royal Ordinance commands.

The Thai Shrimp Association, which represents shrimp farmers in Thailand, did not respond to Al Jazeera regarding these allegations.

For Kanchanadit villagers, mangroves were a natural solution to all their problems. Little by little, some of the old shrimp ponds started to turn into mangrove forests as the trees spread along the shoreline.

Some farmers returned to their abandoned farms when they saw their neighbours obtaining good crops. “I didn’t grow shrimp for a few years because they were all dying,” farmer Supasit Intrapirom told Al Jazeera. “When I went back, I just stopped using chemicals. I now take the water coming from the mangroves, which is rich in nutrients.”

In the December 2004 tsunami, coastlines along both sides of the Indian Ocean, from Thailand to Sri Lanka, were destroyed, many lamented that they had lost the mangroves that used to protect the shorelines. Research, however, revealed later that mangroves reduced the deadly impact of the tsunami waves in areas where the plants flourished.

READ MORE: The Thai village that escaped the tsunami

The 2004 disaster launched a race to recover the coastal forests in countries such as Thailand by replanting the mangroves. The results of these efforts, however, have been disappointing, according to advocates. “There has been a huge failure – [up to] 70-80 percent in most places,” says Enright of MAP. He said that only using a single species of the mangrove tree from about 70 different species available, and their planting in areas not suitable for mangroves, were two reasons for failure.

“We are trying to build awareness that mangroves don’t necessarily need to be planted,” he said, adding that they had to overcome hydrological problems and over-exploitation by people in the region.

Mangroves are ecosystems that have a complex relationship with tide, as the plants need to be periodically submerged in seawater in order to survive, Enright said. This makes every restoration unique, depending on the natural characteristics of the site and the level of degradation.

In the case of the shrimp ponds, said Enright, the hydrology of the areas is usually highly damaged because the tidal exchange has been stopped, making rehabilitation even more challenging. Noppadol’s pond is a good example of this complexity. Mangroves are planted in an elevated area in the centre of the pond where crabs and small fish live. Shrimp grow in the more profound side areas.

Noppadol controls the level of water with a system of doors that he opens and closes following the tides. However, the water has to be decanted before bathing the ponds to make sure that the external pollution does not kill the trees or the animals.

For MAP, the most successful approach for restoration is the Community-Based Ecological Mangrove Restoration, a method that focuses on the recovery of the natural ecological processes of the mangroves as the first step in the mangrove rehabilitation process. It also depends on the involvement of local communities to ensure that the environmental conditions remain intact.

With this approach, they are rehabilitating about 10 ponds in the provinces of Krabi and Phang Nga in southern Thailand.

In Kanchanadit, the rehabilitation has been slow, and only an area of 21 hectares has been recovered over the past 10 years.

“It all depends on the community. The local government gives us the seedlings, but the community covers the rest of the costs, so reforestation is slow,” says Danchulchai, the oyster farmer.

More and more villagers are getting involved in the project since mangroves are an opportunity to obtain a profit from their abandoned ponds and recover other marine crops, such as oysters or crabs, that have been lost.

“Turning the ponds into natural polyculture systems … while restoring mangroves … can be one of the ways to encourage owners to restore disused ponds. This way, they can receive some direct economic return and food over the long-term without expensive artificial feeding or other inputs,” says Enright.

Finding customers for these sustainable shrimp can be a bigger problem. Farmers in Kanchanadit say that they can sell most of their shrimp at the local markets. However, international markets are much more demanding in terms of cost efficiency. The industry is now at a crossroads between efficiency and sustainability.

“Shrimp are treated as a commodity. Consumers want them cheap, and this is part of the problem,” says Brian Szuster, associate professor at the University of Hawaii who has extensively researched environmental impacts on the Thai shrimp industry.

“Thailand has been trying to find technological fixes to keep the production going. First, they moved the production inland into fresh water, and later, they introduced new species like the white shrimp,” says Szuster.

The white shrimp, supposedly more resistant to diseases, is now also being affected by the Early Mortality Syndrome, an epidemic that first hit Thailand in 2011. Since then, the country is no longer (PDF) be the largest exporter of farmed shrimp.

“I don’t see what other fixes they can find now, and it is not going to be easy to keep up with the demand if shrimp are produced in a sustainable way,” says Szuster. “We will have to view shrimp as a more valuable product.”

In this challenging scenario, mangroves can be key in the survival of the Thai shrimp industry, but sustainable shrimp can also be a lifesaver for mangroves.

“We urgently need to restore these abandoned shrimp ponds,” insists Enright, “because they were mangroves, and there is no other ecosystem that provides both the numbers and quantities of goods and services.” 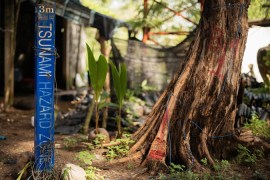 The Thai village that escaped the tsunami

Mangrove forest sheltered Muslim coastal area, but now developers are looking to bulldoze it for a tourist resort. 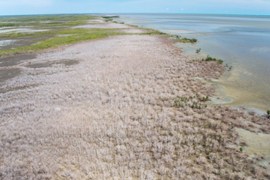 Thousands of hectares of important ecosystem have been wiped out in Northern Australia.