“A monument to understanding the African American experience.”

The National Museum of African American History and Culture will be inaugurated in Washington DC on Saturday by Barack Obama, the first black president of the US.

“It speaks to the testament and the need for institutions to remind us of our history, and reminds us about the contributions of others to the notion of who belongs and who doesn’t,” Adjaye told Al Jazeera.

“It’s a great thing that America is able to make a museum on its front lawn to make sure that conversation is never lost.”

Housed along the iconic National Mall and less than 10 minutes away from the White House, the bronze-coloured building is located in the very place where African slaves were once auctioned off.

Exhibits at the museum will include whips used to punish slaves, shackles, a slave cabin, Ku Klux Klan robes and an auction block that tells the story of babies taken from their mothers.

Find out more about the new museum and its impressive design by watching the video above. 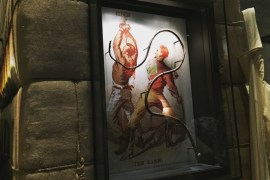