“I wish that the poor people of today were as willing to fight for justice as those who marched with Martin Luther King,” he says. “It seems that the poor have lost heart and are less willing to stand up for themselves.”

Sheptock, who has been intermittently homeless since 1994, has become an activist for Washington DC’s homeless community, which he hopes will vote in the forthcoming elections when Americans head to the polls to choose their 45th president.

“There is no reason for a homeless person not to vote,” he tells Al Jazeera. “You can’t be denied the right to vote because you’re homeless.”

While it is difficult to register to vote without a permanent address, it is not impossible.

Many states now allow individuals to list the place they generally occupy as their residence, which can include a shelter or even a park bench. However, the requirement for official identification when voting can cause challenges for the homeless – obtaining a state-issued ID can be both complicated and costly.

But, as political discussions take place in living rooms across the United States, Washington DC’s homeless community also engages in its own political discourse – equally as captivated by the ongoing presidential campaign as the wider public, according to Sheptock. “I do hear a lot of homeless people talking about politics … We’ve had some pretty energetic conversations about Trump versus Clinton.”

He explains that free newspapers, televisions in homeless shelters and internet access in public libraries are invaluable sources of information on the presidential campaign.

READ MORE: New York’s homeless left out in the cold

Fifty-one-year-old Tony Leonard has been living on the streets of DC since losing his job and subsequently his home in 2011. He says that the city’s homeless community is very politically active. “A lot of us [who are] homeless in DC are educated people who had lives before but lost everything.”

Come November, Leonard will be voting for the Democratic presidential nominee, Hillary Clinton, citing her political experience as his motive. As for her opponent, Republican candidate Donald Trump, “He’s a joke,” Leonard says. “I don’t think anyone thinks he’d make a good president.”

Sheptock says he won’t be voting for Trump either. He tells Al Jazeera that he is torn between Green Party Leader Jill Stein and Hillary Clinton. “All I can say right now is that I plan to vote for a woman”.

Yet, while the majority of homeless interviewed for this article expressed their support for Clinton, not all were averse to Trump’s message.

Jeffrey McNeill claims to have worked as a doorman at Trump’s Taj Mahal Casino Resort in Atlantic City for three years before he lost everything to gambling.

He subsequently moved to Washington DC in 2007, where he would spend the next three years of his life sleeping on the pavement and in shelters. McNeill bought Trump’s book, The Art of the Deal, which he said changed his life forever.

“It was the greatest book ever; it taught me about the economy, how to make deals, how to make money and how to get a job.” The book taught him to be a good businessman, he says.

Ultimately, however, McNeill explains he feels let down by the Democratic administration. “I was a lifelong Democrat; I voted for Obama twice … but there are more homeless people in the city now than when I arrived. I did better under Republican presidents than I have done under Obama.”

More than 500,000 people in the United States were without housing on any given night last year, according to the US Department of Housing and Urban Development’s 2015 annual report. In Washington DC, the number of homeless reached 7,298 in 2015.

Experts say a lack of formal data on homeless voters means it is difficult to measure their electoral participation. However, statistically, people from lower-income backgrounds have been less likely to vote than those with higher incomes.

“There are a good number of people experiencing homelessness who care about voting. It’s no different to the population at large,” said David Pirtle, a public education coordinator for the National Homeless Coalition, who has himself experienced homelessness.

Challenges of voting while homeless

But, there are variations. People living in shelters or transitional housing are far more likely to vote than those with no form of accommodation at all, said Pirtle. “People who are literally living on the street probably have the lowest turnout because a lot of those folks are dealing with other serious issues apart from being homeless, for example, mental health [or] substance abuse.”

Pirtle added that many of these individuals “may not be capable or interested in the process”.

David Lee Norris, 59, and his wife, Naomi Macmillan, 53, are among this group. Home for them is an underpass next to Washington DC’s Union Railway Station. Having both suffered from drug-addiction, they moved from their home in South Carolina in January in the hope of receiving better healthcare for Naomi, who is HIV-positive.

Any assistance they receive comes from NGOs, not the government, according to Norris.

“The government is doing nothing … they are the reason we are here,” he says. “That’s why I’m not voting.”

Obtaining information on voting procedures is very much down to the individual, which can be an extra challenge for those experiencing homelessness, said Julian Johannesen, director of research and training at Nonprofit Vote.

“The government does not help anyone to vote here; you don’t even know where the registration form is,” Johannesen tells Al Jazeera. “People who are already under enormous stress and … have bigger priorities that occupy their attention can benefit from having some help getting over the administrative hurdles.”

Ken Martin, has been homeless in Washington DC since 2012, and while he will be voting in November, he agrees that for many homeless, it is a challenge.

Everyone should be allowed to vote

For the women at Washington DC’s N Street Village, a shelter and recovery centre for homeless and low-income women, lively discussions on the elections are commonplace. Hillary Clinton’s healthcare policies feature particularly high on the agenda during such conversations.

“She’s interested in women’s care, mental health … She’s determined to make sure that women are well-taken care of when she gets to the White House,” says Mary, who lost everything after health problems led to costly and unmanageable medical bills and asked to be identified using a pseudonym.

Cheryl Barnes, meanwhile, who has previously been homeless for 30 years, after suffering from substance and alcohol abuse, says the N Street Village saved her, and come November, she’ll also be voting for Hillary Clinton.

Another resident at the N Street Village, Julia Miller, says she doesn’t align with any particular party. “I like Trump,’ says Miller who has been living at the shelter for five years. “[He] has an economic plan for the country, and I think … he’ll bring more jobs to the United States.”

When it came to voting, Miller said that people should not be stereotyped because of their economic situation. “Everyone should be allowed to vote, that’s how homeless people get legislative action to …change the situation and access more resources.”

She said that no matter which candidate becomes president, she wants them to provide more resources for the homeless.

In the future, there needs to be a more focused campaign about voting, according to Pirtle.

“We spend a lot of money in this country to get the general population to vote,” he says. “We shouldn’t leave our homeless neighbours aside.”

Voting can also have a very positive emotional effect, he adds. “The general feeling [people] can get living on the street is that they are isolated, that they don’t have a voice, but getting people to participate in the electoral process … can have a very beneficial effect on their morale.”

Sitting in the cool foyer of the Martin Luther King Jr Memorial Library, Sheptock emphasises that the space has become a sanctuary for many of the homeless community wanting to escape the city’s blistering summer heat. Ultimately, he wants people to vote no matter what their circumstance.

“If you don’t vote, then you can’t fuss and nag about what the politicians do,” he says. “If you do vote, that earns you the right to complain about what government does.” 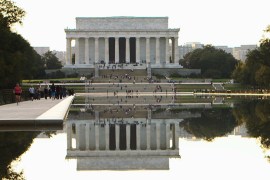 Part two of our investigation into the erosion of US democracy and how it is revealed in the 2016 presidential campaign. 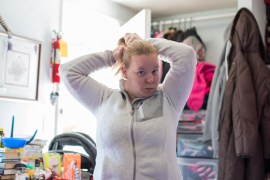 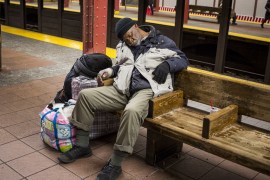