Aguascalientes, Mexico – On a hot, bright evening in Aguascalientes – a peaceful city in central Mexico best known for its students and thriving car industry – Hazem Sharif and Zain Ali strolled through the leafy shade of the bar district.

Small crowds of young people from the city’s universities had begun to gather around pizzas and craft beers, excitement in the air as they awaited the start of the Argentina-USA football game.

The two young men had other things on their minds, however.

They were on their way back from a Spanish class at the Universidad Panamericana, and were out to celebrate the approval of their student residency visas. Their relief at collecting their papers and card was palpable, marking the end of an uncertain – sometimes undocumented – phase in both of their lives, and the chance to begin making their home in Mexico.

“Zain has already learned to make quesadillas,” says 24-year-old Hazem. The stocky oil and gas technician trainee fled to Sirte, Iraq, in 2014, to escape compulsory Syrian military service, the conflict having intensified to a point where students were no longer exempt.

“The problem is he only made three of them,” Hazem jokes.

Zain – longer-haired, slighter of frame and with a background in speech and language therapy – laughs off the complaint.

“It was my first time cooking quesadillas,” the 23-year-old shrugs. “I’d only been here a few days.”

‘I didn’t want to shoot anyone’

It’s been a long road for both students, who arrived in Mexico early last June to join a handful of young Syrians restarting their lives and studies in the Mexican city.

They were members of the Habesha Project – a Mexican NGO that relocates Syrian students to Mexico to continue their academic careers, interrupted by the conflict in Syria.

“As a Kurd, my options have always been limited,” says Hazem, who is from al-Malikiyah in the mainly Kurdish Hasakah governorate of northern Syria.

“In Syria, we could never get government jobs or study certain majors in school.”

Like many Kurds, Hazem describes the institutional discrimination he witnessed while living in Syria, which has led to many Kurds finding themselves torn during the conflict – with rebel forces seeking recruits from backgrounds presumed to have an instinctive animosity towards Syrian President Bashar al-Assad’s government while, on the other hand, military checkpoints were profiling racial minorities and imprisoning suspected dissidents and deserters.

IN PICTURES: Syria’s school of war

“Naturally, when the revolution started in 2011, we lent our voices to the anti-government side. Kurds had led an uprising [PDF] before. But as the uprising became a war, I started to have problems,” he says. “I didn’t want to shoot anyone.”

As he made his escape eastwards to Sirte and then Tobruk in Iraq, Hazem says things were still difficult although he was among other Kurdish refugees.

“I held a refugee status for a while; the only jobs I could get were in construction or as a dishwasher – when all I wanted was to study.”

‘A window to other possibilities’

“Change was necessary, but we just didn’t expect this war to break out,” Zain says.

“We were so optimistic at the start of the revolution – all of us, regardless of ethnicity, Kurds like me and my family, Druze, Sunni, whoever, whatever,” he recalls.

He had to leave all that behind in June 2012, when young men began to face increased pressure to join the Free Syrian Army which was looking for members.

“The revolution was a window to other possibilities – a window that was shut when the first shots were fired.”

Zain escaped with his family to Beirut, Lebanon, where he spent 18 months working part-time as a voice therapist for young trans people and trying to navigate the university’s bureaucracy.

His selection by the Habesha Project – which has chosen an initial group of 30 promising young people who had been referred to the project by NGOs, universities and other institutions – was a chance to start again.

“Now I can study to be an architect,” says Zain. “My city [Aleppo] was beautiful: Now, it’s a big mess. I want to help rebuild it. They are going to need us.”

Hazem’s focus, too, is on helping his people back home.

“What we lived through requires a tough psychology,” he says, describing the state of limbo he endured – between Iran and Cuba – as his family waited for their Mexican visas to be processed.

“I want to be strong for the people back home. I was a manager at a refugee camp in Iraq. So here I’m going to study management and go back and help make refugee camps more efficient, and just generally help Syrians move forward with their lives.

“As a refugee, your future is frozen, but as a student here … anything is possible.”

‘We are building a bridge’

The Habesha Project is the brainchild of Adrian Melendez, the programme’s coordinator. The project arranges for students to arrive in Mexico like any visiting foreign student – not as asylum seekers. Melendez is currently in consultation with European institutions to illustrate how the model is both economic and replicable in other countries

Students enrol in intensive Spanish classes at Universidad Panamericana, where a volunteer student committee helps them to integrate through cultural activities and informational evenings. When they are ready, students can apply for courses at different universities around Mexico.

After working in the NGO sector in Afghanistan, Pakistan, and Iraq, Melendez’ time at a refugee camp in Lebanon sowed the seed for the aid project, which is now reaching fruition.

“My tent was right in the camp,” Melendez explains of his days in Lebanon.

“I wanted to hear people’s stories, so there was tea, electricity, a small kitchen: They could just hang out. One guy used to talk about how early followers of the Prophet Muhammad found refuge in Abyssinia, the area now called Ethiopia. The guy from the camp pronounced ‘Abyssinia’ as ‘Habesha’. That’s where the name is from. So [it] is a story of integration and diversity.

“We are building a bridge,” Melendez says. “We consult a range of stakeholders who recommend young people with some special spark in them, whatever their gender, background, or academic interest. Once we find them, they are safe.”

The humanitarian impulse is coupled with an acute eye to the logistics of the mounting crises at camps in Iraq and Lebanon, as well as towards the future of Syria itself.

“I noticed that refugees would be far better at certain jobs that foreign staff were doing at the NGO where I worked in Iraq, for example,” he says. “That quickly grew into an idea of allowing Syrians to obtain the educational resources they can’t get at home in order to reconstruct their home countries.”

Mexico, he feels, is an ideal location for the arrivals, the first of whom landed in September of last year.

“My country is the world capital of exile,” Melendez says. “From the Republican soldiers of the Spanish Civil War to people fleeing South America’s Dirty War in the 70s, on to the Central American conflicts of the 80s and 90s – people have always looked to Mexico as a place to begin again.

“It will be no different for these guys.”

For anthropologist Alejandra Gomez, a former researcher at the Middle East division of Mexico’s National Museum of Cultures, Syrians arriving in Aguascalientes are likely to find the transition reasonably smooth.

“People from the [Levant] area of the Eastern Mediterranean have left a deep, subtle print on Mexican culture since the fall of the Ottoman Empire at the turn of the 20th century,” she explains.

Many people of Levantine descent are found in port areas, she explains, such as Veracruz and Merida, as well as the capital city and centres of textile production and importation, such as Torreon. Citing research by Mexico’s Centre for Economic Investigation and Teaching, Gomez adds that communities from the Eastern Mediterranean region were better equipped than many arrivals to slot into the country’s middle classes, owing to a strong educational background and superficial similarities in cultural and familial structures.

“Locals talk to us in Spanish at first,” Zain says, laughing. From the balcony of a friend’s apartment in Aguascalientes, he and Hazem take in the view of the city and hills, the light gleaming on the tiled domes of the churches.

“They think we’re Mexican. I mean, we can’t really answer yet after so little time here, but hopefully we will soon,” Zain adds with a smile.

“I don’t think it will be long before we feel at home here.” 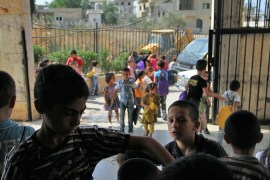 Language barrier has forced many youngsters to discontinue studies after they fled to Lebanon to escape violence. 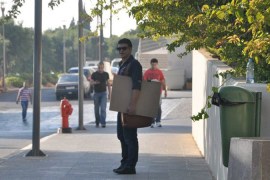 For many on the cusp of graduating university, Syria’s civil war has shaped the course of their education and future. 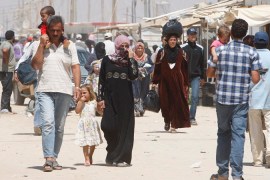