As more US police departments roll out body-worn cameras, getting officers to keep the cameras on during critical incidents, such as the use of excessive force situations, is proving to be a challenge.

Researchers and campaigners say the cameras are useless if police officers can turn them off when they want to.

As of January 2015, at least 72 police departments in the United States had adopted body-worn cameras or developed pilot programmes for their use, according to the American Civil Liberties Union.

“Having the cameras but giving police officers discretion to turn them off whenever they want is a disservice to the public and to the officers,” said Chad Marlow, an advocacy and policy counsel for the ACLU in New York.

Marlow said that police departments needed to clearly outline those situations in their policy manuals and hold officers accountable for failing to record critical events.

He cited an April 2015 case in San Diego, California, where a San Diego Police Officer shot and killed Fridoon Rashawn Nehad, a mentally ill man, but the officer did not turn on his body-worn camera. Marlow says that the case is an example of why police departments need to have clear rules on what happens when an officer doesn’t turn on his body-worn camera during a critical incident.

The police officer, Neal Browder, was put on administrative duty but was in no way disciplined, according to legal documents from the civil case against the officer. Browder was issued with a written reprimand, but was neither docked pay, suspended nor compelled to undergo any additional training.

RELATED: Shot in the back: Police violence in Albuquerque

SDPD spokeswoman Lisa Mckean says Browder is still on the force, but did not answer questions about Browder being investigated or disciplined in relation to Nehad’s death. She said that officer personnel records are exempt from public records according to California law.

Since police personnel records are not available to the public in most states, holding police departments accountable for disciplining officers who don’t follow their department’s body-worn camera policy is difficult.

“If the supervisor feels a violation of this procedure occurred, appropriate action will be taken,” says the SDPD body-worn camera policy dated July 20.

At least 790 people have been killed by police so far this year in the US, according to Killed By Police, one of the websites tracking civilian deaths at the hands of law enforcement. In 2015, at least 1,207 people were killed by US police officers.

Who is keeping track?

At present, there are no US government agencies comprehensively tracking such incidents.

Civil rights campaigners say police departments are accepting officers’ claims at face value – that they didn’t have time to turn on their body cameras; that the cameras fell off, or suddenly malfunctioned during critical incidents – including situations where excessive force might have been used.

“Police officers, of all people, know that laws that have no consequences, have no value,” Marlow said.

Civil rights groups are not alone in fighting for officers to keep their body camera on – US police departments are also grappling with the issue.

Chicago Police Department, one of the biggest law enforcement agencies in the US, has 2,100 body-worn cameras currently in use. However, only seven out 22 police districts in the city have body-worn cameras according to Chicago police spokesman Frank Giancamilli.

He says that body cameras are still new in law enforcement.

“We are still in a pilot programme and because of that, our officers are not subject to the [body-worn camera] directive we’ve developed yet … we see it as a training exercise,” Giancamilli said.

Some of the more controversial police departments, such as the Baltimore City Police department, whose officers were charged in April 2015 for killing 25-year-old Freddie Gray, have open investigations into officers failing to turn on or off their body-worn cameras.

Baltimore City Police Department spokesman TJ Smith declined to discuss details of the investigations but said: “If found in violation, the officers will be appropriately disciplined.” Gray died as a result of spinal injuries sustained while in police custody, and his death led to mass protests in Baltimore and other US cities.

Smith said the Department had 350 cameras in service and a two-year plan to add 2,000 more cameras.

“Our body-worn camera programme is in its infancy stages. We are one of the largest agencies in the country to implement the programme … We constantly evaluate our programme and look for best practice. We are mindful that we will have adjustments as we move forward in the future,” said Smith.

According to a recent scorecard of the camera policies of 50 of the largest police departments in the US by two Washington DC-based groups, only 24 police departments have policies that do not give officers discretion. These policies require officers to record all critical interactions with the public and “required them to provide concrete justifications for failing to record required events.”

The Policy Scorecard was released on August 2 by the Leadership Conference on Civil and Human Rights, a coalition of more than 200 US civil and human rights organisations, and Upturn, a research group.

The other 23 police departments did not require officers to provide concrete justifications for failing to record required events. The body-worn policies of three of the departments were unclear or unavailable on their websites.

“Ferguson was chosen because of the attention on the department after Michael Brown’s killing, and Parker was selected because it had one of the best examples of a body-worn camera policy,” said Scott Simpson, spokesman for The Leadership Conference.

Simpson is referring to the August 2014 police killing of 18-year-old Michael Brown, who was unarmed at the time of the killing and whose death resulted in nationwide protests against police brutality.

The National Police Association of Police Organisations (NAPO), a coalition of more than 1,000 police unions and associations from across the United States, lists officer worn body cameras as one of its legislative priorities.

It has, however, noted concern about S.877 Police Camera Act, a US Senate bill that calls for establishing a pilot grant programme to assist state and local law enforcement agencies in purchasing body-worn cameras for officers.

Among other things, the bill requires “an officer wearing a camera to provide an explanation if an activity that is required to be recorded is not recorded and to obtain a crime victim’s or witness’s consent to be recorded before interviewing him or her.” According to NAPO’s website, the group “has concerns that the provisions in the bill are impractical and would be difficult to implement in the field.”

According to the Scorecard, Atlanta, Chicago, Dallas, Los Angeles, New York and Philadelphia are some of the largest cities with body-worn camera policies that detail when officers are required to record incidents and provide concrete justification when they fail to record required incidents.

In many other cities including Baltimore, Miami, New Orleans, Phoenix and Fresno, police departments have policies that list what incidents or interactions with the public officers have to record, but don’t require officers to justify when they don’t record required events.

“Since the creation of the policy there have been corrective actions or discipline taken for violation of the [body-worn camera] policy,” said Fresno’s Police Chief Jerry Dyer, in an emailed statement to Al Jazeera. Dyer’s spokesperson declined to describe the violations, saying they were “personnel matters”.

In Baton Rouge, where 37-year-old Alton Sterling was shot by police on July 5, police spokesman Don Coppola said, “As of now we are unable to answer any specific questions you have addressed concerning body cameras as we are still in a pilot phase.”

Researchers told Al Jazeera that police excessive use of force drops when officers consistently keep their cameras on.

This is according to findings from the Rand Corporation, a non-profit research organisation based in southern California, whose researchers equipped police officers from 10 police departments in the US and the UK, with body-worn cameras and collected the footage that was recorded.

“When officers stuck closer to the protocol, police use of force fell by 37 percent over police officer shifts where the officers were not using cameras,” said Alex Sutherland, a Rand Europe researcher and co-author of the May 2016 study.

“The combination of the camera plus the early warning creates awareness that the encounter is being filmed, modifying the behaviour of all involved,” the report said.

The researchers found that only four of the police departments complied with their request to keep the cameras on at all times. The exceptions were when officers took breaks, lunch or when they encountered victims of sexual violence or police informants.

“We had a written protocol for when the officers could turn the cameras off … We don’t know why some complied and others didn’t, but the study results have raised questions about this issue in those departments,” said Sutherland.

He wouldn’t name the police departments the team studied but said the findings should be valuable to all departments.

Lacquan McDonald, 17, was carrying a three-inch blade when he was shot 16 times by officer Jason Van Dyke in 2014. 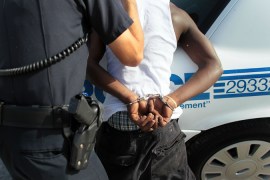