Eggs were still boiling on hot stovetops. Children’s toys remained strewn across living-room floors. Clothes were left on their hangers inside brimming closets, a testament to the thousands of lives that were abandoned in an instant.

Greek Cypriots thought it was a temporary measure when the Turkish military ordered them out of their homes in Varosha, a district of the city of Famagusta, in the summer of 1974. But 42 years have since come and gone, and Varosha remains a ghost town – a hulking blight that towers over the Mediterranean seascape. Empty apartment windows gaze out over families playing beach volleyball, while barbed-wire fencing cuts a swath across the sand, patrolled by armed soldiers.

Children dart in and out of the shallow surf, oblivious to the ever-present tension. It has been this way all their lives.

Cyprus is a country divided. Following centuries of Ottoman rule, the tiny island nation was formally annexed by Britain in 1914, spurring resistance from Greek Cypriots who sought to unify the country with Greece. Five years of guerrilla warfare ended with Cyprus gaining independence in 1960, but despite a power-sharing deal struck between Greek and Turkish Cypriots, tensions between the two communities continued to mount.

In 1974, a decade after the United Nations established a peacekeeping force in Cyprus to stem rising violence, Greece staged a coup, attempting to wrest control of the island from former President Archbishop Makarios III. The move failed, and Turkey responded by sending military forces to northern Cyprus. Tens of thousands of Greek Cypriots fled south, while a smaller population of Turkish Cypriots living in southern Cyprus fled north.

The division and military occupation persists to this day, with the six-square-kilometre ghost town of Varosha standing as one of its most iconic emblems. But as negotiations between Turkish and Greek Cypriot leaders continue – with a joint progress report expected this week – one group is hoping to change that.

“Varosha represents the stagnancy of the Cyprus problem. It’s a physical representation of a decades-long conflict that persists and persists, causing despair in the spirit of the people,” said filmmaker Vasia Markides, who is leading the Famagusta Ecocity Project, an initiative aimed at reviving Varosha and reintegrating it with the rest of Famagusta to create “Europe’s model ecocity” – a walkable, solar-powered, environmentally sustainable hub. Her documentary on the project, slated for release later this year, aims to rally more support.

“To see Varosha and Famagusta as a whole becoming an ecocity would be the ultimate goal,” Markides told Al Jazeera, noting that Varosha in its current state foreshadows “what could come if we don’t transform our lifestyle towards one that respects not only one another, but also the natural world”.

Markides’ mother grew up in Varosha, once a thriving stretch of coastline that was reportedly a destination for film stars such as Elizabeth Taylor, Richard Burton and Brigitte Bardot. For Markides’ mother, though, her strongest memories include the rich smells of jasmine and citrus blossoms that wafted through the air, and spending her childhood playing among the reeds on the beach.

Over the past few years, Markides has assembled a small team – including Turkish-Cypriot architect Ceren Bogac and Greek-Cypriot urban planner Nektarios Christodoulou, among others – to help generate momentum and collect ideas on how to convert Famagusta into an ecocity. Because the project would involve the entire city and not just the deserted district of Varosha, it would entail a wholesale rethink of the streetscape, electrical infrastructure and building design, while also aiming to preserve as many historic structures as possible.

People have very romantic images of this place ... Some people don't even know that giant trees have grown through their houses and demolished everything, and there is not much to save.

The goal is not simply to open a time capsule, but rather to unify Varosha with the rest of the city, Christodoulou said.

“We need to talk about Famagusta as a whole,” he told Al Jazeera, noting that beyond reopening the area physically, the ecocity project could help to mitigate regional tensions by bringing Greek and Turkish Cypriots together to work towards a common goal.

“We are not looking to design the city [ourselves]. We just want to provide a platform where these issues can be discussed by both communities,” Christodoulou said. “We have seen that environmental issues [and] cultural protection issues can bring people together across the border, discussing them without ethnicity constantly being the separating factor.”

For Bogac, 37, the story is also deeply personal. Her father’s family came to Famagusta from the southern port city of Larnaca after the 1974 partitioning, and she grew up in a house that looked out over the makeshift fence around Varosha – a tangle of barbed wire, wooden planks and sheet metal, peppered with signs declaring it the “Forbidden Zone”.

“I was always facing the border line. It was terrible. It was very traumatic,” Bogac told Al Jazeera in an interview along the beachfront next to Varosha.

“I was seeing the same curtains deteriorating every year. I thought about the people who were staying there; were they children? Were they happy? Some of the houses were beautiful. The idea of waking up in the Mediterranean, waking up to the sand, and losing this … Building a house is easy, but turning it into a home by adding memories is not.”

Despite growing interest among both Greek and Turkish Cypriots, however, the ecocity project still faces massive obstacles. It is contingent upon negotiators reaching a solution to the broader Cyprus dispute, until which time, Varosha will remain frozen in its current state. And even if a resolution were to be struck and Varosha reopened to the public, there could be numerous claims on the abandoned properties by the descendants of developers.

Then would come the significant challenge of reaching a consensus on how to rebuild the city in a manner that suited both its current residents, and those who wanted to relocate to Famagusta. The current population of 40,000 could swell to more than 200,000 upon the reopening of Varosha and the larger redevelopment of the city, Bogac estimated – and many may not be prepared for what they would find upon arrival.

“People have very romantic images of this place, so they remember it exactly as they left it in 1974,” she said. “Some people don’t even know that giant trees have grown through their houses and demolished everything, and there is not much to save.”

Christodoulou recently worked on a “mental map” study of Famagusta, asking around 500 Greek and Turkish Cypriots to sketch their image of the city’s existing urban fabric. The results showed a stark contrast in their understanding of the city, with Greek Cypriots mainly recalling features of southern Famagusta, including Varosha, and Turkish Cypriots focusing primarily on the north.

“They designed two different cities,” Christodoulou said, noting that to Turkish Cypriots, “Varosha was the colour of the sea; it didn’t exist”.

Paul Dobraszczyk, a visiting lecturer at London’s Bartlett School of Architecture and author of the forthcoming book, The Dead City: Urban Ruins and the Spectacle of Decay, is among the few people who have been inside Varosha since it was walled off in 1974. He snuck through a hole in the fence in 2013 and says he was struck by the sense of serenity amid the desolate homes.

“I had expected to find it upsetting, but it felt so untouched and so quiet that I experienced it as very peaceful and tranquil. Everywhere, nature had begun to overtake the buildings and streets, and most of the buildings were inhabited by pigeons and other animals,” Dobraszczyk told Al Jazeera. “You could also hear many sounds just outside the Forbidden Zone; I remember the call to prayer from Famagusta, and the sound of children playing in a school just outside the fence.”

I would argue that the 40-plus years of abandonment should not be forgotten, but integrated into any proposal for renovating the buildings and reopening the Forbidden Zone.

Dobraszczyk, who has done substantial research on the role of abandoned spaces in society, expressed concern that the ecocity project could involve the demolition of many of Varosha’s old buildings.

“I would argue that the 40-plus years of abandonment should not be forgotten, but integrated into any proposal for renovating the buildings and reopening the Forbidden Zone,” he said.

“Of course, the expense would be enormous, but to demolish and rebuild the town would be to ignore its recent history. Far better would be to try and incorporate some of the ruins into a new town, renovate others, and rebuild others with recycled and salvaged materials [to] produce a unique urban environment.”

About an hour’s drive west of Varosha stands another relic of the 1974 conflict. The Nicosia Airport has stood abandoned for four decades, part of the buffer zone established by the UN, which is tasked with maintaining order in the region while finding a resolution to the Cypriot dispute.

Aleem Siddique, a spokesperson for the UN Peacekeeping Force in Cyprus, told Al Jazeera that the talks covered a raft of issues, from power-sharing, to the economy, to security arrangements. Negotiations have entered an “intensive phase”, with a public update from the two leaders slated for Wednesday, he added.

“The Cyprus peace talks … continue to make good progress in an atmosphere of trust and goodwill,” Siddique said, noting that any resolution would include stipulations governing the fate of contested sites such as Varosha.

“Both leaders have expressed their hope of reaching a comprehensive settlement by the end of 2016. If an agreement is reached, both sides intend to hold a referendum for voters to decide the outcome.”

However, despite being backed by a majority of Turkish Cypriots, a previous referendum calling for reunification failed in 2004, after three-quarters of Greek Cypriots voted against it.

Back on the edges of Varosha, a handful of tourists peer over the makeshift fence surrounding the deserted district, as Turkish soldiers stand idle on a nearby rooftop.

Jutting up at peculiar angles, the planks and rusted metal sheets comprising the fence appear to have been hurled upon the beach, like a shipwreck. On the other side, sloping drifts of sand are strewn with weedy outgrowths.

The fence stretches the perimeter of Varosha, effectively severing it from the adjacent city. Famagusta residents living along this line look upon it every day from their front porches – a view of emptiness and decay, of rusted doors that have fallen off their hinges and come to rest against wrought-iron balcony railings. The fence itself has been in place so long that it, too, has started to slump in places, as nature strains to reassert itself from within Varosha’s boundaries.

The state of the fence is a sign of hope for Famagusta, Christodoulou said, as he gazed out across the empty district under a setting sun.

“This shows that there can be a transition,” he said, “that things can change.” 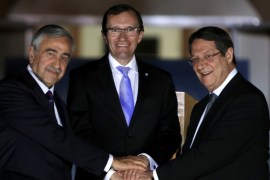 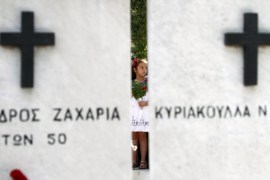 Sunday marks the 40th anniversary of the division of Cyprus, hopes of reunification remain dim. 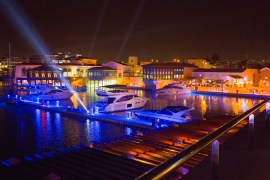 There’s something about Cyprus

Cyprus is a tax haven and has long attracted wealthy Russians, but it could become a European energy hub.